Under Mayor Durkan, Seattle has only built about 4% of its 2018 bike lane goal

Even many of the claimed mileage is misleading, since they are delayed from 2017. From an update to the Move Seattle Levy Oversight Committee (PDF).

Under Mayor Jenny Durkan, Seattle has nearly stopped building bike lanes. With the need to build more than ten miles of protected bike lanes in order to reach the Move Seattle Levy’s bike lane goals, SDOT says it will have constructed 1.88 miles in 2018. That is a pitiful 18 percent.

But the truth is even worse. That 18 percent is an inflated number. 1.49 of those 1.88 miles of bike lane were actually delayed 2017 projects that opened at the start of the year. They were accounted for in last year’s Move Seattle performance update as the excuse for why SDOT would miss its 2017 bike lane goals. So if you subtract those projects, SDOT has so far only constructed 0.39 of the 10.43 miles of protected bike lanes needed to meet the 2018 goal set by Seattle voters. That’s 3.7 percent.

There is no term for this other than failure.

But rather than apologizing for so wildly underdelivering on a goal set by the voters, Mayor Durkan had the gall to highlight it as though it were some kind of success. As though we can’t see that 1.4 or 1.88 or 0.39 are all numbers far lower than the goal of 10.43. In her self-congratulating document “One Year of Urgent Action (PDF),” she lists building bike lanes as an example that she is “delivering essential services and meeting the needs of our growing city”:

The NE 65th Street bike lanes currently under construction thanks to the tireless work of Councilmember Rob Johnson are pretty much the only bike lanes in active construction right now. Nearly everything else has been delayed. A highly-compromised neighborhood greenway in Rainier Valley, which will do some good but will fail at truly connecting the neighborhood, will make up the bulk of the 2018 mileage.

Below is the project list Mayor Durkan inherited when she took office, based on the voter-approved goals in the Move Seattle Levy and the Council-approved Bicycle Master Plan: 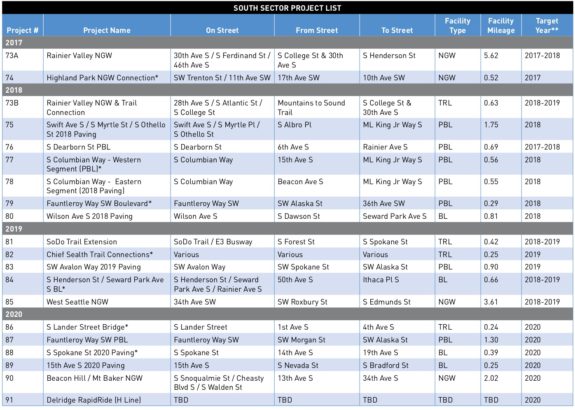 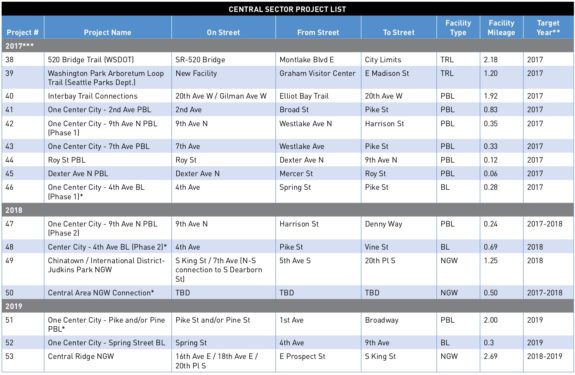 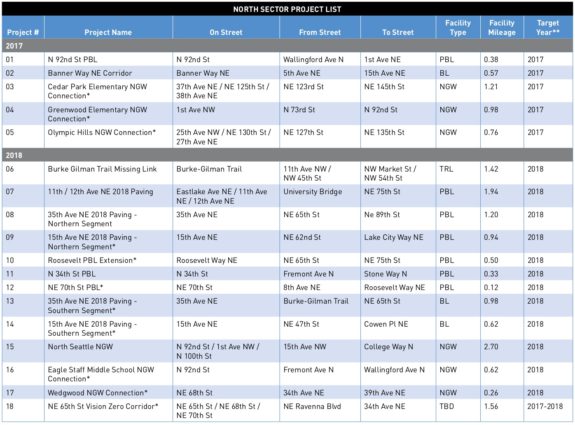 It’s hard to say whether Mayor Durkan is actively undermining SDOT’s efforts to grow biking as a viable transportation mode or if the department is floundering due to the leadership vacuum she has created at the top of the department. I want to believe it is the latter, and that Mayor Durkan is on the verge of appointing a good permanent SDOT Director she will entrust with the political backing needed to enact our city’s transportation plans and policies with urgency in 2019.

The coming traffic crunch downtown is only getting closer, and the mayor just wasted an entire year that she could have spent making planned street changes to provide more people with more options to get around without a car. Her bike route progress is grim, but her transit progress may be even worse.

The big test for Mayor Durkan is here. Decisions need to be made. Bike lane projects need to get a green light and her political backing. So many bus lanes need to be painted. We also need effective education and encouragement campaigns to help people change their transportation habits. All this needs to happen quickly if we want these options to be available to people when the traffic crunch begins.

As we wrote last week, the combination of bike share and more comfortable bike routes is working. We can see this in the Fremont Bridge bike counter data, which shattered records by a huge margin this year. And Seattle now has a huge backlog of projects ready to go in 2019. They just need the mayor’s backing.

All the time for waiting and delaying has been used up in 2018. I’ve already seen people referring to the upcoming transportation mess as the “Jenny Jam” because she has had chances to get ahead of the problem and has so far squandered them through delays and inaction. I don’t think that’s a moniker she wants to stick.

Mayor Nickels lost his political career because he didn't plan for a snowstorm. How are voters going to feel when we've had years to avoid the #JennyJam but did nothing? https://t.co/vygWzH6DFv

46 Responses to Under Mayor Durkan, Seattle has only built about 4% of its 2018 bike lane goal