2018’s one millionth Fremont Bridge bike trip is about to cross, smashing the record 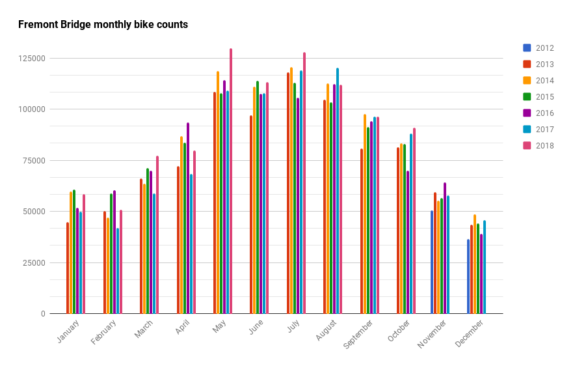 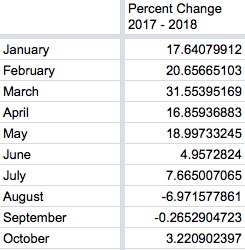 Whoever bikes across the Fremont Bridge as number 1,582 today will tip the 2018 bike counter into seven digits, clobbering all previous records by a wide margin.

Bike trips across the iconic bridge, which forms a pinch point for many north and northwest Seattle regional bike routes, have been smashing monthly bike records ever since bike share companies launched in summer 2017. But the counts really started taking off in 2018, when the number of bikes in service ramped up to nearly 10,000 across Lime, Spin and ofo. And the biggest increases were in winter and spring, with the first five months of the year each increasing by an astounding 17 to 32 percent (though winter 2017 was extremely rainy).

Good work, everyone! Somebody should probably throw a party, because it feels like it has been too long since we had a good bike celebration in this town. One million bike trips across a single bridge is an awesome accomplishment, and we still have all of December to run up the score. You all contributed to this one bike ride at a time.

Of course, there is still a lot of work to do. The city needs to get back on track because 2018 successes came from 2017 work. And due in large part to a leadership vacuum that Mayor Jenny Durkan has created at SDOT, Seattle has done very little in 2018 to ensure an equally exciting 2019.

Spin and ofo left town in July as the 2017 bike share pilot ended, and Seattle then delayed its rollout of the new bike share permit. Perhaps partly due to this permit delay (though also due to wildfire smoke), August and September were the only months that did not see significant growth over 2017.

Bike share works. And especially as downtown Seattle heads into a tough couple years where we really need a lot more people to find alternatives to driving, the city should be doing everything it can to encourage and grow these systems.

It’s very disappointing to see that Seattle leaders already squandered half the summer by delaying the new permit rollout until November. Though Mayor Jenny Durkan has been talking a lot about the coming traffic crunch recently, she has not prioritized bike share expansion or experimentation with non-bike options like scooters. We can see bike share working in these bike counts, so why is the mayor not working to get all the non-car trips we can out of these services? It’s not about money because these companies pay their own way.

It feels like the mayor is on the verge of clutching defeat from the jaws of victory. Bike share and downtown bike lanes were all set to grow together, allowing more people to make more trips comfortably by bike. This combo is the magic sauce for increasing bike trips. But Mayor Durkan stepped in and delayed both of these just when we need them most.

But now the bike share permit is out, and JUMP has joined Lime with Lyft Bikes also set to join at some point. And the City Council has all but directed SDOT to build a serious number of downtown bike lanes by the end of next year in an effort to catch up with the backlog created by inaction and indecision on the mayor’s part this year (SDOT still does not have a permanent Director one year after Scott Kubly left). With strong leadership, 2019 could be an amazing year for biking in Seattle, and the bike trip counts will continue upward.

23 Responses to 2018’s one millionth Fremont Bridge bike trip is about to cross, smashing the record