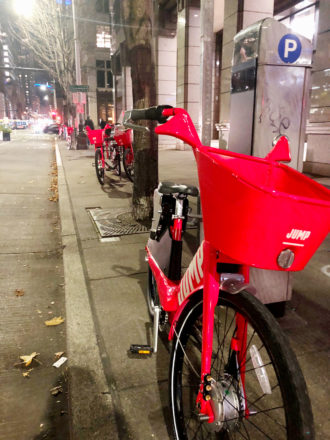 JUMP bikes staged downtown over the weekend. Unlike with Lime, JUMP bikes need to be locked to a rack or pole.

After months of delays getting the new bike share permit in place and through environmental review, Uber’s JUMP launched in Seattle this morning. They join Lime, which has had a temporary monopoly on bike share in town since early summer when Spin and ofo left.

The company is launching 300 bikes initially with plans to ramp up “over the coming weeks and months,” according to a press release (see the full release below). During this initial phase, the service area is limited to 65th Street in the north and McClellan Street in the south (basically, the north end of Green Lake to Mount Baker Station). But the service area will expand as they add more bikes, the company said.

JUMP’s red bikes are a bit different than Lime’s e-bikes. They have gears, for one. They also have a keypad and RFID reader for app-less unlocking. So, for example, you could tie your ORCA card to your JUMP account, letting you unlock their bikes with the same card you use to board transit (though you still need to set up a JUMP or Uber account and pay through the company). Both the JUMP and Uber apps should give you access to the bikes. As a promo, your first five trips up to 30 minutes are free every day through December 12. 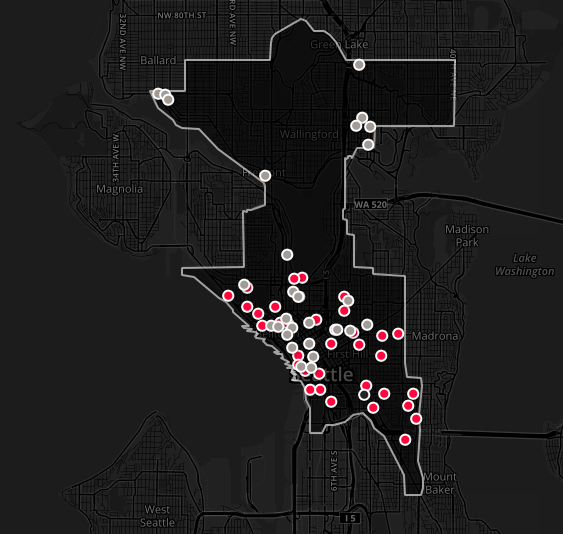 But the biggest difference between Lime and JUMP is parking. JUMP bikes need to be locked to a bike rack or street sign (UPDATE: The JUMP website does say bikes need to be locked to something, but they rarely are and there is no obvious indication to users that they need to do so). When you unlock it, the metal u-shaped bar is released similar to a normal u-lock. There is a slot on the rear rack where you can stash the bar while riding. When you get to your destination, just insert the bar back into the lock to end your trip. This does mean it could be slightly harder to find a locking place, but it could also mean that the bikes are less likely to fall over and block sidewalks. It could also mean that bike parking for personal bikes will get a little more scarce unless the city works hard to increase the bike parking supply.

So there are pros and cons between the JUMP and Lime parking styles. It will be very interesting to see them in action and at scale to see which one people prefer.

I tested a JUMP bike back in June, and noted that in addition to having gears and feeling a bit heavier and more solid, the bikes were faster than Lime’s e-bikes. But Seattle’s permit rules require that shared e-bikes stop giving riders an assist beyond 15 mph, so Jump has had to scale their 20 mph bikes down to 15 to meet Seattle’s rules. Hey, we should do the same thing to cars in Seattle!

JUMP has also changed its pay structure. Where the company formerly charged $2 for 30 minutes, they will now charge $1 to unlock plus 10¢ a minute. Lime charges $1 + 15¢ per minute for their e-bikes and $1 + 5¢ per minute for pedal bikes. So there’s already some price competition at work.

Like Lime, JUMP also has a discounted ride plan called JUMP Boost for people who already qualify for housing, food, utility or transit assistance programs. This includes ORCA Lift. People who qualify will be able to get 60 minutes of ride time every day for $5/month. And like Lime, people without a credit card can pay in cash at PayNearMe locations, such as 7-Eleven and CVS. Just scan or take a photo of your program card or documentation and email it to [email protected] with the subject line “Seattle Boost Documentation,” then wait for them to get back to you with approval and more details.

JUMP was formerly known as Social Bicycles, an early innovator in creating shared bikes that can be locked without a docking station. SoBi provided the tech for Portland’s Biketown system, which is operated by former Pronto Cycle Share operator Motivate. Lyft has since purchased Motivate, so Biketown is now operated by Lyft but uses bikes that share the tech and look of Uber’s bikes. Lyft has its own dockless bikes now and has applied for a Seattle permit. We have yet to hear any details about a Seattle launch, though.

Have you used a JUMP bike yet? Let us know your thoughts in comments below. Here’s the full JUMP press release:

Uber today announced the launch of dockless electric bike share service JUMP in Seattle. JUMP bikes are electric and provide a gentle boost with every pedal, making it easier for riders to get around their city without breaking a sweat. The bikes have integrated “lock to” technology and feature GPS intelligence. They can be unlocked by entering an account number on the user interface or by using a linked, compatible radio-frequency identification (RFID) card, like an ORCA card.

“Seattle has been a leader in dockless bike share, so we’re thrilled to bring our JUMP electric bikes as the first step towards offering Uber customers a multi-modal transportation platform in this great Northwest city,” said JUMP spokesperson Nelle Pierson. “Bike sharing is an environmentally friendly, affordable way to get around, and a mobility option we believe should be a permanent cornerstone of a city’s transportation system.”

JUMP Bikes in Seattle will cost $1 to unlock and 10 cents per minute to ride. As part of a launch promotion, JUMP is offering riders five free trips up to 30 minutes long each day through December 12. JUMP ambassadors will also be handing out more than 1,000 free helmets through Dec. 18 at 1191 2nd Ave. from 11 a.m. until 6 p.m. every day of the week except Tuesdays and Sundays.

JUMP also offers a Boost Plan for lower-income riders. Those who qualify for the Boost Plan receive 60 minutes of free ride time per day at a cost of $5 per month. Details on how to enroll in JUMP’s Seattle Boost plan can be found at https://jump.com/cities/seattle/boost-plan/.

In 2017, JUMP bikes launched the first ever dockless electric bike share system in the United States. Dockless bike share expands transportation options for residents by making it easier to rent and park a bike anywhere within the community, instead of at designated stations. This spring, Uber acquired JUMP as part of its mission to expand the menu of affordable, reliable transportation options available within the Uber app, and make it even easier for residents to get across town without relying on their own personal vehicle.

With both the Uber and JUMP mobile apps, users can find and unlock (and reserve up to 30 minutes in advance) JUMP pedal-assist e-bikes. It’s simple to use.

Via the Uber app:

Via the JUMP app: