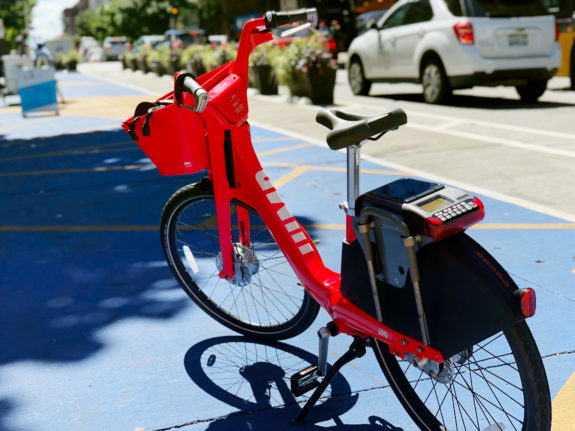 No new companies have received permits to operate bike share services in Seattle since the autumn, but Uber-owned Jump is hoping to be next.

The city is waiting to approve more companies until their revamped bike share permit is ready. The City Council Transportation Committee was scheduled to review the permit rules in June, but that report has been pushed back to the committee’s mid-July meeting (there’s no meeting in early July due to the holiday).

I met with representatives from Uber and Jump recently to go for a test ride and talk about their hopes to launch in Seattle. First, let’s talk about the bike.

The single biggest difference between the eye-catching red e-bikes and the already-operating Lime-E bikes is how you lock them. With Lime-E, riders can park near bike racks or in the furniture zone of sidewalks. Just lock the back wheel and you’re done. But Jump bikes must be locked to a city bike rack using a metal locking bar that attaches to the rear rack.

There are pros and cons to this difference. One pro is that bikes locked to bike racks are less likely to block walkways or get tossed into bodies of water. Improper parking is a common complaint about the bikes in operation today. But the bike rack requirement also limits the places you can lock a bike because there are not always bike racks available nearby, especially in residential neighborhoods (Seattle’s bike rack policy is focused on business access). And, of course, many places already don’t have enough bike parking for people who ride their own bikes, let alone a surge of bike share bikes.

But that doesn’t mean it can’t work. Even without Jump, there have already been discussions about the need to dramatically increase the city’s bike parking to help maintain bike share order and improve bike access to businesses. Concepts for on-street bike corrals could include space both for bike racks and space marked for free-floating bikes. Providing space on-street would also be a great way to help keep busy sidewalks clear.

Another big difference with the Jump bike is that each bike has an access panel and card reader, so users can access them without a smart phone. For example, someone could set up an account online with a credit card and link their ORCA card. Then all they need to do is beep their ORCA card, and their Jump account will be charged. The funds don’t come out of the user’s ORCA account or pass, but it’s still pretty cool. There’s also a keypad, so people can unlock bikes with a code.

Typically, Jump bikes cost $2 for 30 minutes, which is significantly lower than Lime-E’s $1 to unlock plus ¢15 per minute (a total of $5.50 for a 30-minute ride). And unlike any of the bike share services currently operating here, you can reserve a Jump bike for 30 minutes through the app, similar to Car2Go and BMW ReachNow.

And since Uber only recently acquired Jump, I wouldn’t be surprised if Uber users will some day be able to access the bikes with their existing accounts, perhaps through the Uber app. Imagine someone going to book an Uber ride only to have the app tell them a bike ride would be faster and cheaper. That’s pretty cool.

The bikes are sturdy and heavy, and the e-assist feels a bit more powerful than the Lime-E bikes. They also have gears, giving you a wider speed range than the single-speed Lime-E bikes. And that gets to another difference: They can go 20 mph with the assist, which is five mph faster than Lime-E bikes. But while those differences might sound like benefits over Lime, they could also be disadvantages. Part of the Lime-E success, I think, is because the single-speed bikes are so easy-to-use and unintimidating. I’m interested to see how the public responds to the two options.

Formerly a branding of Social Bicycles, Uber bought Jump in April for around $200 million, according to Techcrunch. This sort of confirms a trend that bike share companies have been claiming: Their bikes are serving many people who might have otherwise taken a for-hire car. When the bike companies first launched, attention was on how they would compete with established bike share programs. But the people behind these companies didn’t have little systems like Pronto Cycle Share in their sights, they were going for the bulk of urban trips under a couple miles that are often served poorly by transit and that cost too much to call an Uber or Lyft. Perhaps the purchase of Jump is Uber’s way of saying, “If you can’t beat ’em, join ’em.”

Speaking of Lyft, recent reports say the company is trying to buy Motivate, the former operator of Pronto. So the two biggest app taxi companies may soon be competing in the bike share space. Will Seattle see the unlikely return of Motivate in the form of a dockless bike scheme owned by Lyft? I can’t say that I would have predicted such a plot twist a year ago.

Of course, Seattle has not always seen eye-to-eye with Uber and Lyft. The companies recently lost a Washington Supreme Court case that could force them to open up their trip data, which has been closely guarded. And court battles continue over Seattle’s attempts to allow drivers to unionize. So will these companies bring that baggage to the generally-friendly bike share program? Will this lead to bike share workers joining the fight to unionize?

Innovation and investment in bike share continues at an amazing pace, and Seattle has so far been at the center of it all. It’s exciting and unpredictable, with huge potential to dramatically increase the number of trips taken by bike if it is successful. One thing is for sure: I have no idea what bike share story I will be writing this time next year.

This entry was posted in news and tagged bike share, jump, uber. Bookmark the permalink.