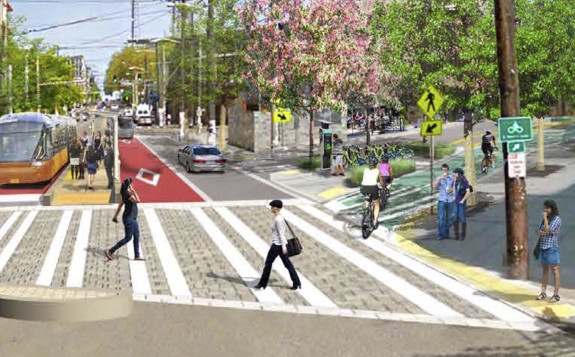 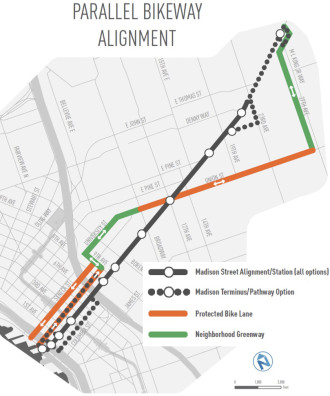 Union Street could get a major bike lane update as part of the Madison Bus Rapid Transit project, according to city plans presented at an open house earlier this week.

The bike route upgrades are part of an attempt to make the Madison Street BRT project a “complete street” by building a nearby “parallel” bike facility rather than trying to squeeze a bike lane onto Madison itself. I’m going to focus on the bike elements here, but you can learn more about the transit elements of the plan in this story from Capitol Hill Seattle.

The first thing you will notice when looking at the bike route map is that it sure stretches the definition of the word “parallel.” Madison is a diagonal street in the grid, so there is no truly parallel route, which planners admit in their outreach materials:

The Madison BRT study includes the identification of a “parallel” bikeway facility. As a diagonal street in a grid network, it is not possible to develop a precise parallel route to Madison for bicyclists. However, with a suite of targeted bikeway investments and intersection enhancements, improved bicycle access to existing destinations and the future bus rapid transit service on Madison Street is possible. The goal of this bikeway is to improve bicycle access for people of all ages and abilities.

At 23rd and Union, the planned bike lane is almost half a mile from Madison. At 27th and Union, the bike route is 0.7 miles from Madison. We argued previously that if a so-called “parallel” bike route is actually preferable to bike lanes on a diagonal street, there need to be quality routes on both sides of the street. Because Union Street doesn’t serve someone near Miller Park, for example. Investing in a Denny Way neighborhood greenway could be a way to help provide a route north of Madison.

But investing in a better bike lane on Union would be huge for bikeability in the Central District and Capitol Hill. And the BRT plans seem to be taking crossing improvements seriously. For example, here’s a concept for how to fix the crazy, stressful and dangerous intersection at 12th/Union/Madison: 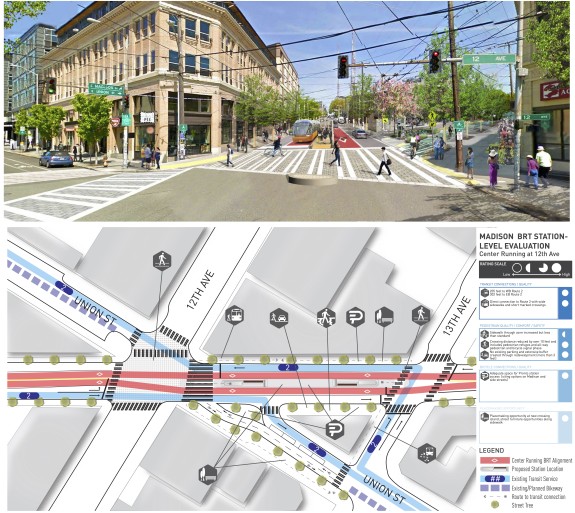 12th Ave is also a major bike route, and a safety redesign that takes these bike route connections seriously would be huge for bike access and comfort in the area. It’s not gonna be easy, though. How do people biking on 12th make left turns onto Union? How do people biking continue straight through on Union? How do we speed up Metro’s Route 2 bus? A design that can serve all these needs would be huge for the neighborhood and for cross-city biking and transit routes.

But right now, this is “a challenging intersection to navigate for all users – transit riders, pedestrians, cyclists, and drivers,” according to outreach materials. That’s putting it mildly.

The big question for the rest of the Union bike lanes is whether a two-way bikeway or two one-way bike lanes are preferred. Here’s what the potential options could look like: 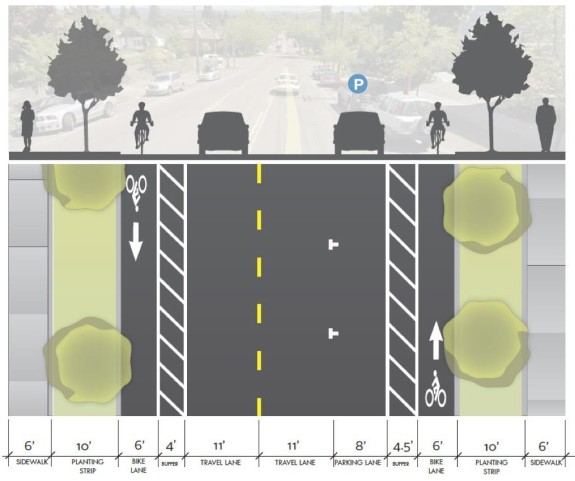 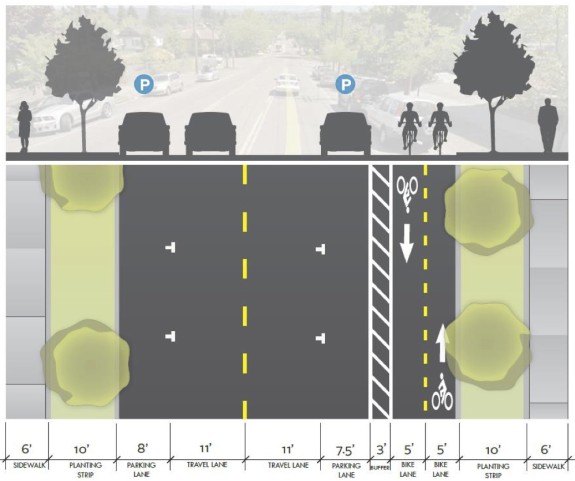 The hilly terrain on Union will be challenging for either option, especially for turning conflicts at unsignalized intersections and driveways. This is a challenge the city needs to figure out for projects all across the city, as highlighted recently at 42nd and Roosevelt.

But today, the outdated paint-only bike lanes (where they exist) are often located in the door zone of parked cars. It’s a major bike route that would be used a whole lot more if it were safer and more comfortable (I know because I live there!).

If a two-way bikeway were chosen, here’s how the 23rd and Union area could look: 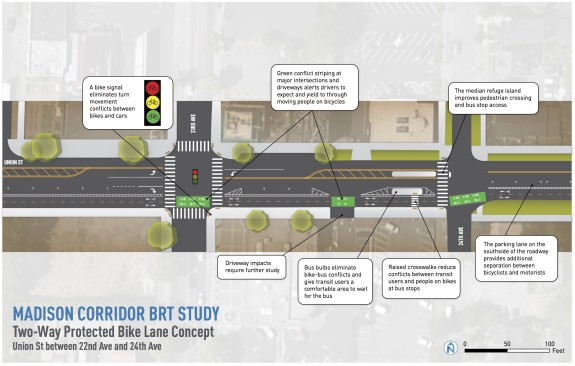 There are also some serious walking safety needs on this stretch of Union. I recently attended a meeting of Positively Union, a new group convened by commercial property owner and longtime community leader Jean Tinnea. Tinnea was seriously injured a year ago when someone driving failed to stop for her at the crosswalk at 20th and Union. Now she’s back on her feet and determined to make the street safer.

The group brought up ideas like installing raised crosswalks to slow people driving (and biking) on the fast downhill stretches. One longtime member of Good Shepherd Lutheran Church (where the meeting was held) spoke about how scared she is to cross the street near her Madrona home ever since she was hit years ago. She has never owned a car, and her story really hit home how long overdue these safety changes are. 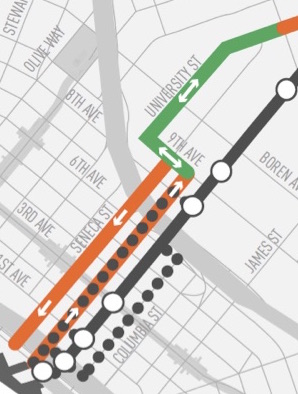 Marion Street on First Hill not shown, but it’s one block south of Madison

On the other end of the project area, protected bike lanes on Seneca and Spring would also provide a much-needed connection between First Hill and downtown. Currently, all options are either too steep, poorly designed for bikes or both.

Those bike lanes would then connect via 9th Ave to a great neighborhood greenway opportunity on University Street.

But, of course, University Street is not all that close to Madison and does nothing for needs south of Madison. It would be great to see the rest of 9th Ave get improvements (it’s a great connection to Harborview, Jefferson Street and the Yesler Terrace neighborhood) as well as a connection to a potential neighborhood greenway on Marion Street, which would help serve more neighborhood needs around Madison and connect to Broadway and Seattle U.

The city is already planning a neighborhood greenway on Columbia Street, which would meet up nicely with a Marion route (there’s an open house on that project 6:15 p.m. May 12 at Douglass-Truth Library).

The Madison BRT project timeline is to draft a preferred deign option in June and finalize it in the fall after more public outreach. From there, the timeline depends on whether voters approve the Move Seattle levy in November. If so, project development would happen in 2016 and 2017 for construction in 2018.

If you have comments on the plans, send them to Maria Koengeter, Transit Strategic Advisor, at [email protected] or (206) 733-9865. And, of course, post your thoughts below.