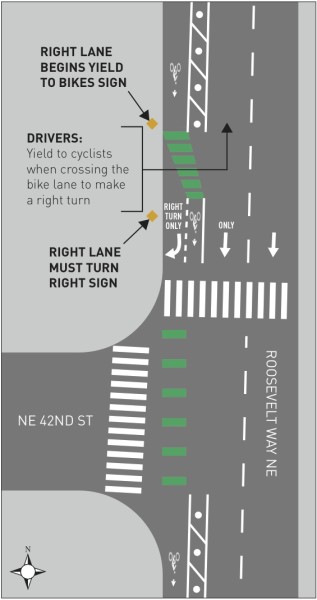 SDOT’s traffic engineers are trying a different bike lane design at 42nd and Roosevelt after several people were injured at the U District intersection.

The intersection design is especially tricky because of the fairly long and steep downhill that allows both people biking and driving to pick up a bit of speed before the intersection. People driving are supposed to yield to anyone in the bike lane before turning, but far too many fail to do so.

“It has been brought to our attention that interactions between people driving, walking and riding bikes at the intersection of Roosevelt Way NE and NE 42nd Street are not working as intended,” SDOT wrote to neighbors recently via a door hanger note. “As a result, we are changing the way right turns are made.”

The newest attempt to fix the issue uses a design in the national NACTO guide on bike lane design, which includes a “combined” turn and bike lane. People turning right are now supposed to merge with the bike lane before turning. Workers installed the new design over the weekend.

Initial observations suggest many people are still turning across the bike lane incorrectly, though a period of adjustment is often necessary for road design changes.

The city installed this short section of protected bike lane between NE 45th Street and the north approach to the University Bridge in January to demonstrate the planned bike lane design that will be part of a large repaving project scheduled to start later this year.

Whether collisions are reduced or not (we desperately hope they are reduced before anyone else is seriously hurt or worse), the “combined turn lane” design is never going to be super comfortable for everyone. Intersections and driveways are the most dangerous places in a bike route, and where people need protection the most. The combined lane is a low-cost solution that also removes much of the value a protected bike lane creates: The sense of safety and comfort for people of all ages and abilities.

A more complete solution would involve calming traffic speeds and creating a “protected intersection” design commonly seen in Europe but not yet tried in Seattle. This would essentially involve placing a new curb further into the intersection that would slow turning movements, create better sightlines and provide more space for people to avoid potential conflicts. The slight shift in the bike lane may also slow people on bikes, a good thing on such a long downhill. This video by Nick Falbo of Alta Planning + Design in Portland provides a great illustration:

Protected Intersections For Bicyclists from Nick Falbo on Vimeo.

Andres Salomon of NE Seattle Greenways has been pushing a similar design for Roosevelt and made this quick sketch of what it could possibly look like:

The advantage of putting a low-cost pilot design down on the ground in paint-only form is that the city can observe how their concepts work in real-time and make changes before installing a permanent design. That’s one reason they installed a short section of the Roosevelt bike lane early. And there is surprisingly little guidance on how to build safe bike lanes down big hills.

But they need to figure out how make intersections like this one work safely for all users. As of March, plans for a permanent design to be installed as part of the major repaving project later this year do not include this protected intersection concept (it’s a technical design document, so elements may be difficult to see): 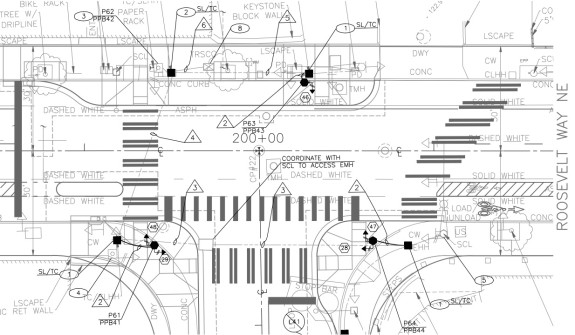 Protected intersections are not the only options out there for making intersections safer. One option we have already seen would be to have separate signal phases for people turning and people biking like on 2nd Ave. Or, especially in places with very high numbers of people walking, the city could consider something like a “raised intersection,” which is like a big speed hump. This would greatly improve the walking and accessibility environment and slow people biking and driving.

On a street like Roosevelt, the biggest key to safety lies in slowing people down. A long one-way downhill with few major intersections, the street can feel more like a highway than a street in a very dense neighborhood. Anything the city can do to interrupt speeders would improve safety.

But what Seattle can’t do is repeat designs we’ve already tried that don’t meet all our traffic safety and bicycle access goals. Combined turn lanes simply don’t meet the “all ages and abilities” standard the city is supposed to be striving for in bike routes like Roosevelt. We know this because we have a ton of them all over the city, and people consistently report that they do not feel safe using them.

Safe intersections and driveways are the last big missing piece in Seattle’s bike lane designs. It’s not an easy problem to fix (certainly more complicated than I have laid out here), but that’s why we have some of the best traffic engineers in the nation. We have to figure this out.

Founder and Editor of Seattle Bike Blog.
View all posts by Tom Fucoloro →
This entry was posted in news and tagged roosevelt, sdot, university district. Bookmark the permalink.