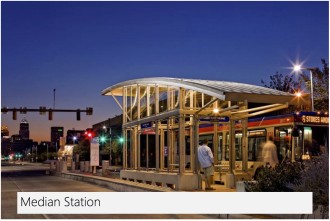 One example of how a center-aligned BRT could look on Madison. Image from an SDOT presentation

The city is currently in the outreach and design phase for a significant rapid bus project along Madison Street from the waterfront to 23rd Ave (and possibly MLK). The rapidly-developing corridor is a rare direct route diagonal to the street grid, making it a prime candidate for faster, more consistent and more reliable transit service, and it was identified in the city’s Transit Master Plan as such.

Planners are currently conducting an online survey, which you should complete by February 5.

The basic elements of a Bus Rapid Transit project along the corridor is the creation of transit-only lanes, running buses more often and having fewer-but-better stops, allowing for much faster movement even during crunch commute times. Planners are considering options that either put the bus lanes and stops in the center lanes (as pictured above) or in the curb lanes. You can learn more from this recent presentation (large PDF).

But as this is the Seattle Bike Blog, let’s look at the biking elements in the area. To meet with the city’s Complete Streets Ordinance, planners are looking for how to make sure walking and biking elements are included in the project. Especially for biking, Madison Street’s sometimes ridiculously steep grades provide some pretty significant bike route challenges. Especially downtown, Madison is so steep even a streetcar could not make the trip (thus the BRT rather than rail). If you’re on a bike, you are likely going to seek out less-steep streets nearby to get up to First Hill and beyond.

How steep is it? Here’s a graphic:

Between the waterfront and Boylston, the average grade is 7.4 percent. The Seattle Walking Map shows seven of these 14 blocks exceed ten percent grade. To put that in perspective, blocks beyond five percent start to be a challenge for creating an all-ages and abilities bike route, though sometimes they are unavoidable in hilly Seattle.

The Seattle Bicycle Master Plan took these grade challenges into account and suggests that bike route efforts be focused on Spring and Seneca just north of Madison, where grades are still tough, but not nearly as tough as Madison: 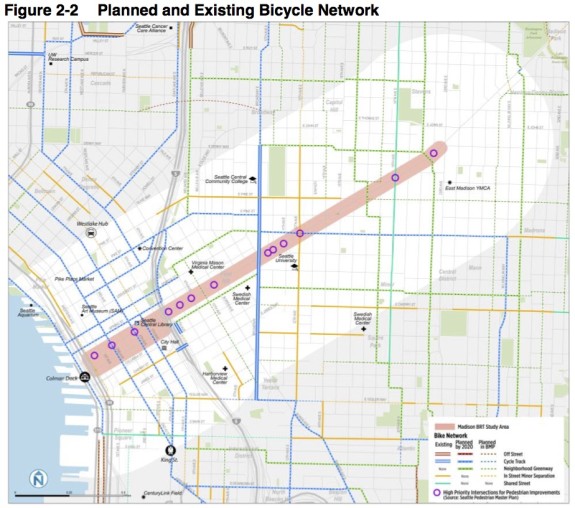 So Madison BRT planners have already decided that there will be no bike facility on Madison itself, and instead are looking to develop a “parallel” bike route. West of Broadway, there are some clear ways to do this: Improve the Cherry Street bike lane and its connection to Marion (which should get a neighborhood greenway facelift) and build the Seneca and/or Spring Street protected bike lanes. Either continued protected bike lanes on Seneca across First Hill would work, or maybe a University Street neighborhood greenway as noted in the Bike Master Plan.

But east of Broadway, the idea of creating a route “parallel” to Madison becomes absurd because Madison is the only street that cuts a diagonal across the street grid. There simply is no parallel bike route option.

Because Madison is a diagonal street, it creates all kinds of troublesome intersections and safety issues. But it is also an extraordinary opportunity to make big strides in walking and biking safety and comfort in addition to transit reliability. In general, there need to be safe crosswalks all along the street. From a bike route perspective, here are some key intersection improvements that a Madison redesign could address: 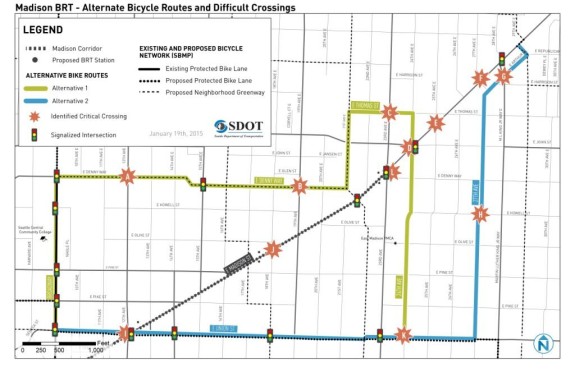 Image from the Madison BRT survey.

The stated bike goal of the project is to “develop a parallel bike corridor,” according to a recent open house presentation. The text of the survey puts it this way:

The Madison Corridor BRT project will advance the design of one east – west bicycle facility that generally connects the same neighborhoods as the Madison Street corridor. The bicycle facility will provide a better bike connection to the Madison corridor, while offering comfortable connections along the corridor for people of all ages and abilities. The selected route will be consistent with the Seattle Bicycle Master Plan Update adopted in 2014.

But that’s essentially impossible. If no bike lane will be provided on Madison itself, a smart collection of needed bike connections along with protected bike lanes on Union and Seneca/Spring and a neighborhood greenway on Denny is probably a more useful way of looking at the bike route needs along the corridor. At one point, the survey asks respondents to choose between Denny and Union, streets that are nearly a half mile apart. These routes serve completely different areas, so it’s impossible to choose between them. Both are needed.

Are there any other bike connections needed along this corridor? Let us know in the comments below (and, of course, complete that survey!).

Founder and Editor of Seattle Bike Blog.
View all posts by Tom Fucoloro →
This entry was posted in news and tagged bus rapid transit, madison, sdot. Bookmark the permalink.