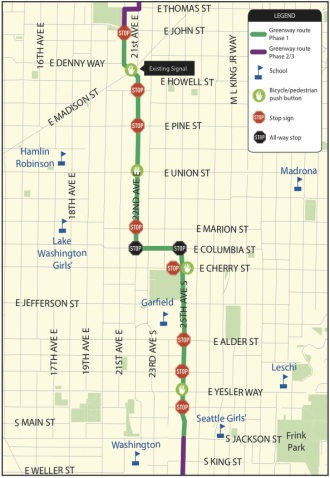 Work will begin on the the Central Area Neighborhood Greenway next week, the first piece of a biking and walking route that will someday connect Judkins Park (and the I-90 Trail) to Interlaken Park (and the future 520 Trail) via Garfield and Miller Community Centers.

Constructed in three phases, the first segment is actually the middle phase, running from Jackson to John.

Once completed, it will be the first modern neighborhood greenway in either the Central District or Capitol Hill. It should be finished in “late winter 2015,” according to a project fact sheet.

One of the most important elements of the route, however, will not be ready until the 23rd Ave repaving project is finished in 2016. The greenway route will someday cross 23rd at Columbia Street, which is a future neighborhood greenway candidate itself. But until that crossing is completed as part of the high-budget repaving project, the neighborhood greenway will be routed across 23rd at Cherry, according to project planners.

“The plan currently is to detour greenway traffic onto E Cherry St across 23rd,” said SDOT Communications Advisor Maribel Cruz in an email. “The thought process behind this was that there is already an existing signalized intersection there that will provide the safest crossing possible. The interim solution will likely be in place for 15-18 months while the larger 23rd project catches up.”

The Cherry Street bike lanes currently end at 24th Ave and pick up again at 21st Ave. The crossing at 23rd today does not have any bike lanes and is far from meeting the all ages and abilities standard neighborhood greenways strive for. But it really wouldn’t be too hard to extend the bike lanes through the intersection or at least update the design to NACTO standards: 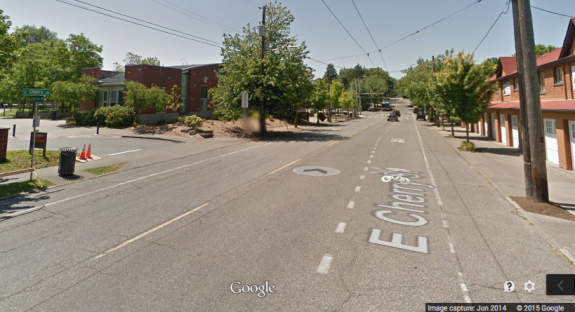 Today, the Cherry Street bike lanes disappear before the intersection. This could be a chance to connect them.

Here are more details on the Central Area Neighborhood Greenway:

This work will necessitate some temporary on-street parking restrictions, pedestrian and cyclist detours, and some light construction noise. Access to businesses and residences will be maintained except when temporary restrictions are necessary. Normal work hours will be 9 AM to 4 PM. Installation is expected to be complete in late Winter 2015.