As work starts on Central Area Greenway, the case for a safer E Cherry Street

As we reported previously, the city is about to start work on the first phase of the Central Area Greenway, running from Jackson to John along 25th and 22nd Avenues. Well, we thought we should expand on our suggestion for a bike connection on E Cherry Street to fill a safety gap in the interim greenway detour.

The planned greenway crossing of 23rd Ave at E Columbia Street will not be complete for about a year and a half after the city completes work on this neighborhood greenway. During that time, people will be detoured from 22nd Ave to 25th Ave via E Cherry Street. Today, that section of street looks like this: 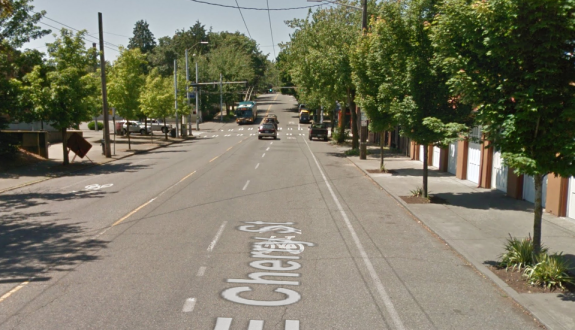 That’s Garfield Community Center on the left, Coyote Central and Central Space on the right.

This is not a very busy street (8,300 vehicles per day), yet it effectively has five lanes at the intersection with 23rd (people use the parking lane as a right turn lane). This creates an unnecessarily dangerous and uncomfortable experience for people biking and walking. And if you are driving, all those extra lanes disappear at 25th and 22nd anyway, forcing you to merge right back into one lane in each direction.

The city should give the street a safe streets redesign with protected or buffered bike lanes in order to provide a safer temporary greenway route and fix an unnecessarily dangerous and inconsistent street that runs next to a community center, two high schools (the NOVA alternative school will soon return to a renovated building at 24th/Cherry), a community swimming pool and a youth programs center. The Bike Master Plan calls for the city to fill this bike lane gap, and there’s no better time to do it than now.

We threw together this quick sketch using Streetmix to demonstrate what Cherry could look like. At minimum, this could run just between 21st and 25th, though I could also see it running east to MLK and beyond:

Or, if the city directly follows the Bike Master Plan’s call for “in-lane, minor separation,” it could look like this:

The work could be completed using paint and plastic posts in order to keep the budget low.

A redesign would remove unnecessary travel lanes that make the street uncomfortable for biking. Fewer lanes would also make the street easier and safer for people on foot to cross to and from Garfield Community Center.

With so many community destinations drawing huge numbers of people of all ages and abilities, this street needs to work better for everyone.

For those interested in the Central Area Greenway details, here’s a construction update from SDOT:

The Seattle Department of Transportation will begin construction the week of Feb. 23 on Phase 1 of the Central Area Neighborhood Greenway, in time for completion this spring. Phase 1 will run between South Jackson and East John streets along 25th Avenue, 22nd Avenue, and 21st Avenue East.

Much of the work to be done involves repair or upgrade of curb ramps and sidewalks at arterial intersections. Crews will work south to north, one intersection at a time, at the following locations:

Typical working hours will be 7 a.m. to 4 p.m., Monday through Friday. One of four crosswalks at each intersection will be closed during ramp construction. In addition, temporary on-street parking restrictions will be necessary to complete the work. Pedestrian and vehicle detours and signage will be provided.

Other elements of Phase 1 greenway implementation include:

Neighborhood greenways are residential streets made safer and calmer for people of all ages and abilities to walk and ride bikes. Greenways can provide access to schools, trails, parks, transit, and neighborhood businesses.

The Central Area Neighborhood Greenway will run on residential streets adjacent to 23rd Avenue between East Roanoke Street and Rainier Avenue South. SDOT selected the greenway route with the help of extensive community input gathered at open houses, drop-in sessions, presentations, and briefings. Phase 2 and 3 (the south and north ends of the greenway, respectively) will be implemented in late 2015.

Funding for the $4 million Central Area Neighborhood Greenway project comes from a combination of local, state, and federal sources.

7 Responses to As work starts on Central Area Greenway, the case for a safer E Cherry Street