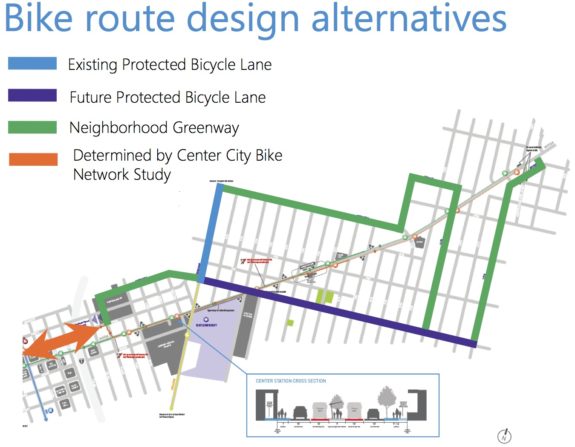 With a preferred route for the Madison BRT project selected, now it’s time to dig into the specifics. The same goes for the so-called “parallel” bike network improvements that are part of the corridor redesign.

You can get a look at the latest updates and make sure the changes will be bold and ambitious during a set of open houses next week: 5 – 7 p.m. August 3 in the Seattle University Campion Ballroom, 11 a.m. – 1 p.m. August 4 at Town Hall Seattle and 5 – 7 p.m. August 9 at Meredith Mathews East Madison YMCA.

Obviously, the bulk of the project’s funding and attention is centered on the rapid transit service planned for the growing Madison corridor. But this is Seattle Bike Blog, so we’re going to highlight the bike stuff.

We’ve reported on the possible bike connections previously, including protected bike lanes on Spring/Seneca downtown, a neighborhood greenway across First Hill, protected bike lanes on Union and other neighborhood greenway connections in the Central District and Capitol Hill. The preferred alternative report (PDF) commits to some of these elements, but it’s still going to take a lot of support to make sure comfortable, complete and connected bike improvements are included.

As noted on page 15, some key sections (especially Union Street bike lanes) are noted only as “potential.” These complete connections need to be baked into the project as part of the project’s complete streets requirement. From the document:

A parallel bicycle facility would be provided including:

The project is also a chance to finally fix the awful intersection at 12th/Union/Madison. Current plans call for a two-stage maneuver for people biking to continue on Union: 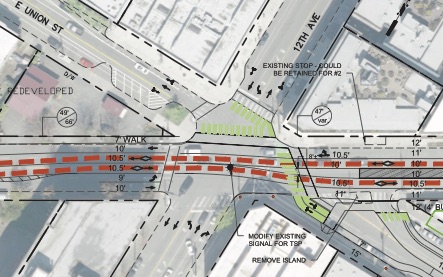 The intersection of 12th and Union would include an additional crosswalk and bicycle crossings. There would also be a wide crosswalk on Madison on the east side of the intersection enabling transitions between the bike facilities on Union to the east across Madison and 12th Avenues.

At 24th, a short segment of two-way bicycle lane would be striped through the intersection of 24th and John and improvements to the sidewalk on Madison west of the intersection would be included in order to facilitate through movements on the 24th Avenue Greenway.

The $120 million project is funded in part by the Move Seattle Levy, but there is still a lot of work to do to find the rest of the funds through Federal, state and regional grants and from Sound Transit 3 if voters approve the ballot measure in November. If funds are found in time, the work could be complete in 2019:

If you can’t make the meeting, there will be an online survey that opens August 2. You can email questions to [email protected].

Founder and Editor of Seattle Bike Blog.
View all posts by Tom Fucoloro →
This entry was posted in news and tagged madison, madison brt, sdot, union street. Bookmark the permalink.