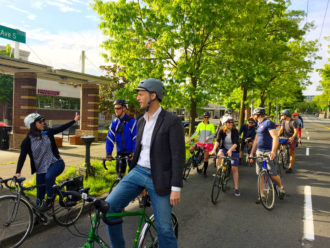 Scott Kubly resigned as SDOT Director last month, closing a chapter of incredible growth (and growing pains) over his more than three years at the expanding agency.

As SDOT Director during the development of the nine-year Move Seattle transportation levy voters approved in 2015, Kubly’s imprint will remain in Seattle for many years to come. The $930 million levy represents a bold vision for a future Seattle that prioritizes walking, biking and transit as the modes that will best absorb growth in the city and region. Voters approved it by a 17 point margin.

Kubly also oversaw a major expansion of bus service after city voters approved a 2014 ballot measure to save Metro service by increasing car tabs fees. That measure — along with some significant SDOT projects to speed up transit service, like transit-only lanes in South Lake Union — has furthered the partnership between the city and county as providers of bus service. It is also a major reason transit usage is growing quickly in Seattle while dropping nationwide.

Considering the amount of growth the city saw during his tenure, his job was impossible.

“In the three and a half years I’ve worked here, the city’s population has gone up something like ten percent,” a much relaxed Kubly said over pizza recently. “Most of it’s happening in just a few neighborhoods,” mainly urban villages. So while this “tiny fraction of the land area” has been gaining more and more residents, the streets there have also been constricted by lane and sidewalk closures due to development.

“There are 70 cranes at any given time in Seattle,” said Kubly. “It’s usually like 45 cranes for the 2nd place city.” With that kind of growth, transit, walking and biking aren’t just smart choices for a DOT, they are the only choices. As we can all see with Mercer Street — a big car-focused project Kubly inherited — trying to solve congestion from growth with wide streets for cars does not work (Kubly said the main problem with Mercer is that it has no transit service).

That’s why the walk/bike/transit priorities outlined in the Move Seattle levy are so important for the city right now. And no matter who takes the helm permanently after Kubly, the levy will continue to direct investments beyond the current mayoral term.

“The volume of work getting done in that context is pretty cool,” he said. Kubly especially had a lot of praise for SDOT’s crews, the people on the ground who always find a way to deliver projects even while working on increasingly busy streets.

“Seattle is transitioning from a mid-size into a large city,” he said. That’s not a transition that’s going to happen without some transportation growing pains.

For biking, Kubly didn’t waste any time making taking bold action. When Kubly took over the department, the 2nd Ave bike lane and Pronto Cycle Share were already nearing launch. So one of the first things he did was manage a major street change to the heart of downtown, a project that helped demonstrate the vision for Move Seattle.

The 2nd Ave bike lane pilot would become one of the biggest successes of his tenure not because SDOT got it perfect right off the bat, but because staff continually observed how it was or wasn’t working and made improvements as needed, he said.

Before coming to Seattle, Kubly spent a brief couple month period as President of Alta Bicycle Share, the company contracted to operate Pronto. His experience with bike share both at the government level (he previously worked for Washington DC and Chicago) and at Alta was touted as a benefit to Seattle when then-Mayor Ed Murray hired him. But his Alta experience became a liability in 2016, when he admitted to an ethics violation for failing to obtain a waiver to work directly with Alta (and Motivate, the company that bought Alta in the interim). The investigation found “no evidence that Kubly sought or received any personal financial gain in connection with the acknowledged violations.”

Though the ethics violation and subsequent demise of Pronto has been a drag on Kubly’s public reputation in recent years, that didn’t stop him from trying bike share again. By creating a pilot permit system for private bike share companies to operate in the city, Kubly’s SDOT turned heads in cities across the nation and ushered in a new era of bike share that has already vastly outperformed Pronto. And unlike Pronto, which relied on public funding, the new bike share companies actually pay permit fees to the city. And perhaps it’s worth noting that the nationwide expansion of the new Seattle bike share model is a significant challenge to Motivate.

It would have been so much easier for Kubly to say, “Hell no,” when staffer Kyle Rowe started working on the pilot bike share permit concept before the final Pronto stations were even removed from city streets. Why would he want to touch bike share again after all that? Turning what is easily his most frustrating failure as SDOT Director into a major success that’s turning heads across the nation deserves some kudos.

“That’s one of my favorite parts about my time here, how the department recovered from that,” he said of bike share.

Kubly leaves office with a lot of unfinished projects, but also some great stuff in the pipeline. The 2nd Ave bike lane extension is set to open soon, and construction on the 7th Ave bike lane starts this week. A protected bike lane on 4th Ave is also in the pipeline for 2018, though it will fall to Interim Director Goran Sparrman to get it built. As will finally completing the Ballard Missing Link of the Burke-Gilman Trail, set to break ground in the spring if legal decisions go the city’s way.

Kubly said a connection to the International District and Dearborn remain the biggest missing piece of the downtown bike network. But when he took over as Director in 2014, there was not a single protected bike lane anywhere in downtown Seattle. It hasn’t come as quickly as this blog or many advocates wanted, but a skeleton of a bike network is starting to come together downtown. The fruits of this work won’t be realized until the next SDOT Director’s tenure.

For now, Kubly and his wife Paulina are going to spend some time with their new baby, born just months ago, while he figures out what he is doing next. Mayor Jenny Durkan said she will conduct a national search for his permanent replacement. Here’s the mayor’s statement:

Following the resignation of Seattle Department of Transportation (SDOT) Director Scott Kubly, Mayor Durkan named Goran Sparrman as Interim Director, effective January 5, 2018. Sparrman was previously the Interim Director and Deputy Director of SDOT as well as the former Director of Transportation at the City of Bellevue and at Portland’s Bureau of Traffic Management. Durkan will launch a national search process to find a candidate for the permanent position.

“I want to thank Scott for his service to Seattle and wish him well as he pursues new opportunities. In a time of unprecedented growth, Scott set the stage for a significant increase in multi-modal investments in our city, which will have an impact for decades to come. Goran is well-respected leader and has immense experience as an engineer, manager, and planner in our region – I know he will execute over the months to come on my top transportation priorities,” said Mayor Durkan. “Our region has been trying to catch up to its transportation needs for decades, and the next few years will be critical for creating more safe, efficient and well-connected transportation choices that make it easier and safer for residents to get around on foot, by bike and via mass transit. With a number of significant projects in the pipeline, the next leader must be well positioned to deliver on investments, improve bus service, effectively implement light rail expansion, and prioritize our maintenance backlog.

Kubly also posted a note about his departure on Facebook:

Today I submitted my resignation to Mayor Durkan. The last 3.5 years at SDOT have been great – helping to lead the DOT in the fastest growing city in the county at a time when technology and transportation were changing more than at anytime since the mass adoption of the automobile. I’ve had the privilege of meeting some great people and working with a great team that delivered amazing results.

We have made lots of visible progress in helping transform mobility in the City. We rolled out the largest transit service increase in the City’s history. As congestion increase we maintained or improved transit’s performance by rolling out new service, big improvements like transit lanes on Westlake, and small improvements to give buses the advantage. We rolled out key parts of the Center City Bike Network on 2nd Ave, Pike and Pine, and we are about to start construction on 7th Avenue Protected Bike Lanes. We completed the Westlake Cycle Track. The results are in. Seattle transit ridership is growing faster than any city in the country and in the center city 95% of the growth in employment has been accommodated in someway other than driving alone. The team at SDOT is also tackling long standing challenges and we are poised to complete the Missing Link in a way that meets the needs of the maritime industrial community and achieve the long held vision for a completed Missing Link. We completed the City’s first freight master plan and find for the first time ever a freight spot improvement program. Our emerging work on urban goods delivery is leading the country and we are set to start construction on the long awaited Lander Street Overpass. We also retimed all the traffic signals in downtown and improved travel time by about 10%.

I’m very proud of the people at SDOT and the work we accomplished.

I’m still exploring what I will do next. After 3.5 years of running a city DOT I want to take some time off, spend time with our new baby and think about what comes next.

This entry was posted in news and tagged jenny durkan, scott kubly, sdot. Bookmark the permalink.

11 Responses to Kubly’s SDOT responded to massive growth by going big on walking, biking and transit