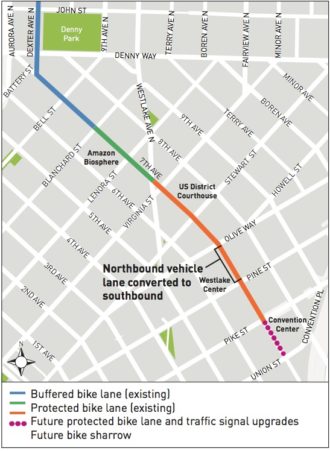 Construction is set to begin next week to finally connect the well-used 7th Ave bike lane to the downtown core.

When we last wrote about the planned 7th Ave southbound protected bike lane, we noted that it would end just a few blocks from 2nd Ave. But in the interim, SDOT accelerated planning and construction of new protected bike lanes on Pike and Pine Streets. So instead of being yet another bike lane hanging in a vacuum, the new lane will fill a vital gap in the young downtown bike network.

Construction should be complete in April.

Because bike routes on both Dexter and 9th Avenues N connect to 7th, the relatively low-traffic street has long been a major bike route into downtown from many points north. Construction in recent years has dramatically reduced the street’s usability as a bike route, but that may all change in 2018.

Crews plan to begin construction to improve 7th Ave between Westlake Ave and Union St as soon as January 2, 2018. We expect construction to last through April 2018. Crews plan to work from north to south, with the work area stretching approximately 2-3 blocks at a time. Neighbors should expect typical weekday work hours from 7 AM – 5 PM, temporary lane closures on 7th Ave, potential traffic delays, and intermittent night and weekend work.

7th Ave was selected because it extends the existing 7th Ave protected bike lane and serves as an intuitive connection between South Lake Union and Capitol Hill. The route also has relatively low vehicle traffic volumes compared with other downtown streets and doesn’t serve transit riders. In addition, the conversion of 1 block from 2-way to 1-way provides an opportunity to improve traffic flow.

Extending the 7th Ave protected bike lane is part of the City’s Vision Zero plan to end traffic deaths and serious injuries by 2030.

With this lane set to open in April, SDOT should take another look at the block of Pine Street between 7th and 8th Avenues. Today, an eastbound bike lane on Pine begins at 8th Ave and connects all the way up past Broadway to 15th Ave. Extending that eastbound bike lane just one more block west would connect the new bike lane on 7th Ave to Capitol Hill and give people headed east on Pike Street a better option for connecting to Pine. Rather than biking uphill in mixed traffic on Pike for the block under the Convention Center archway, people could turn left on the lower-traffic 7th Ave and connect to the Pine Street bike lane there.

This new 7th Ave connection also puts more pressure on the city to improve the Pine Street bike connection through Westlake Park. The current solution requires people biking to make a stressful merge with car and bus traffic through the brick-paved area between 5th and 4th Avenues. Close calls are common here, since people driving are at the same time trying to merge left so they can get around the line of right-turning cars that are constantly backed-up through the pseudo-park.

There are several possible solutions here. The city could install a line of planters and/or posts to create a bike lane through the brick area. Or, to be more bold, the city could make the brick area car-free, allowing only bikes and buses through:

Perhaps we should close 4th/5th Pine to auto traffic again. It was like that in recent memory. Here's a @TheStranger article about @Nordstrom killing it: https://t.co/NmUOW8dyTK https://t.co/B968B6PgXu

And, of course, the 7th Ave bike lane will only go southbound. Neither 6th nor 8th Avenues are quality northbound options. 6th is very busy with a paint-only bike lane that doesn’t start until after crossing Westlake, while 8th has a skinny, paint-only bike lane that is constantly blocked by turning or double-parked cars. Both options require significant mixed traffic biking, which is unappealing to a lot of people who might otherwise get around our growing city by bike.

But Seattle’s downtown bike network is finally starting to come together, which has been a mere dream for so long. With each new connection, pressure on the remaining missing links increases, but only because the reality of an inviting, low-stress network of bikeable routes through downtown is so tantalizingly close.

Here’s a look at the basic redesign for 7th Ave: 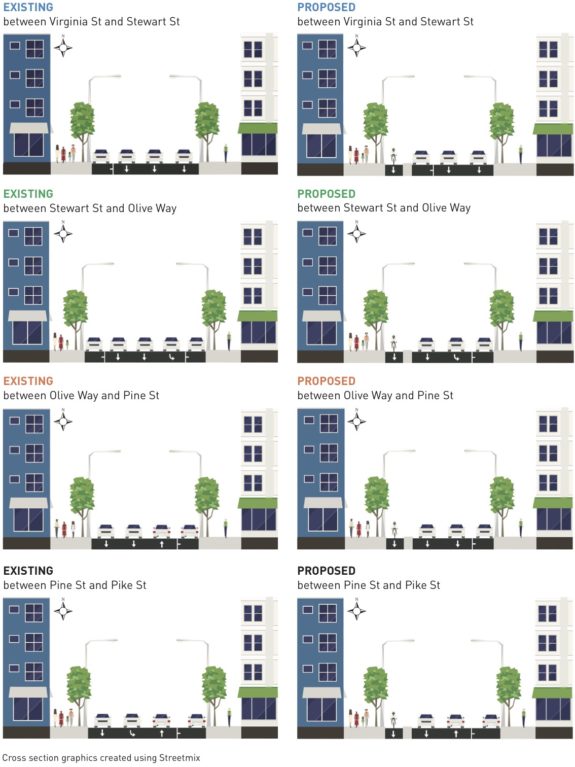