Seattle votes to charge $60 per car to fund transit 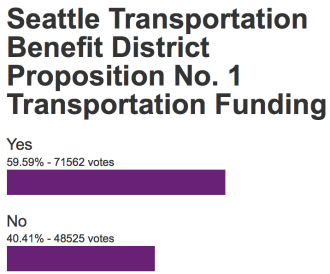 After a very disappointing loss in King County during the spring, Seattle decided to run its own version of the car tabs and sales tax measure intended to avoid transit cuts and add new service.

Early returns show the measure winning big 59 to 41 percent (UPDATE: The margin appears to be growing. Wednesday returns showed 60-40). If past results are any clue, that margin could even grow as the votes of younger, more transit-hungry procrastinators are counted.

Let’s be clear, Seattle just voted to charge $60 per year to own a car in the city, and to spend that money expanding and improving transit service. That’s a smart way to fund transit and make our growing city move faster and more reliably. We simply do not have the capacity for more people to drive alone to get around, and Seattle voters understand that.

Even though there are 76 cars for every 100 adult residents in Seattle (a number that is declining), only 41 percent of voters so far have voted against the measure. This suggests that half of the city’s car owners are happy to pay an extra $60 every year if it means the city has better transit. That’s really cool, and pretty much demolishes the meme that Seattleites who drive cars see the city’s walk, bike and transit efforts as a “war on cars,” a concept that only exists these days on blathering KIRO talk radio shows (where it belongs).

We’re all in this growing city together, and we need to find ways to get people where they need to go without adding more cars to the roads. Seattle keeps adding jobs and residents, so we need to add transit service to keep up. It doesn’t matter if you own a car or not, Seattle residents are united behind the vision of a city with better mass transit.

There are more transportation battles ahead. The state legislature needs to pass a transportation package at some point. Cascade Bicycle Club reports that at least 26 of their 30 endorsed candidates have won or appear to be winning their races. And since transit service is not on the chopping block now, there may be more bargaining power against bad highway expansion projects. Or maybe we could reinstate the ability for local governments to use a motor vehicle excise tax to raise needed safe streets and transit funding. That would levy a tax based on a vehicle’s value, a much more fair option than a regressive sales tax or even a flat-rate vehicle license fee. But the state legislature is still split, so it’s not yet clear if they will be more productive than they were in 2014.

More locally, Seattle needs to develop a transportation measure to replace Bridging the Gap, which expires at the end of 2015. It is important that the city piece together a strong package that funds safe streets and building better transit infrastructure in addition to increasing maintenance for our growing road and bridge repair backlog. But it also needs to pass in an election without a major national campaign, which tends to favor more conservative voters. So passing a truly ambitious package that fully funds the Bike Master Plan is going to take a ton of organizing and get-out-the-vote efforts.

And, of course, every City Councilmember will be up for election next year thanks to the city’s district elections law. Safe streets needs to be a topic on the minds of every successful candidate for the Council in every part of the city, and that’s going to take a lot of work from a lot of people.

Looking even further, Sound Transit 3 should be ready for a vote in 2016. We need that package to be even more bold than any of the previous ST votes. This could be our best chance to dramatically expand regional high capacity transit service and build truly fast transit service to Ballard.

But Tuesday’s vote to pass a transit measure using a funding mechanism that is not an easy pill for many people to swallow shows that Seattle is beyond ready to go all the way on smart transportation plans. So let’s make it happen.