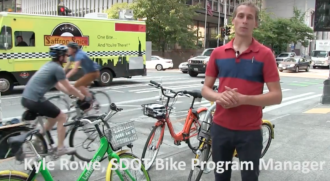 Kyle Rowe was still an undergrad at UW when he started working for SDOT. In a few short years, he would make himself indispensable to the department, take a career risk on a doomed bike share program and somehow turn it into a success that caught the world’s attention.

Rowe is the SDOT staffer most responsible for Seattle’s role in launching this new free-floating bike share boom that is spreading across the nation. During the launch celebration for LimeBike, CEO Toby Sun told the crowd to give Rowe a hand because “he is literally writing the rules other cities are following from a blank Word doc.” The pilot permit rules Seattle is using have become the basis for allowing the legal and responsible operation of these bikes in a U.S. city.

Rowe recently left SDOT to work for Spin. His job now is to take what Seattle learned to other cities across the country (ethics rules require that he not work with the City of Seattle for a couple years).

“I want to get it right,” said Rowe, explaining why he left SDOT to work on a national level for a private bike share company. Rowe believes that cities developing good rules for bike share are vital for the services to succeed in the U.S. So his job is kind of funny in that he is essentially going to cities and lobbying them to regulate the company he works for (as well as their competitors). But creating a fair playing field for companies that is designed with the good of cities and its residents in mind is the best path to success for this new model of bike share, he said.

“I could have stayed at SDOT my entire career,” he said. “Startups are going to continue to disrupt. Knowing that business will help me help SDOT or another agency” if he some day returns to the public sector. Rowe will continue living in Seattle, though his job now sends him flying all over the country.

Did I mention that Rowe just turned 28 a few weeks ago?

He started as an intern working on mapping and analysis work for the Bicycle Master Plan back in 2013, but he made himself so indispensable to the project that they moved him into more of a planning role. His Senior project was an analysis of the economic impact of bike lanes on NE 65th Street, which Seattle Bike Blog wrote about at the time. That analysis project along with his work as an intern was enough to land him a job at SDOT even though he only held a bachelor’s degree, not the graduate degree the Department often prefers.

During the next few years, Rowe worked as lead or support on many complete streets projects (Dexter, College Way, Dearborn, Roosevelt, 2nd Ave, to name a few), the city’s bike parking program (this experience would prove vital for writing the bike share permit), the city’s bike map, and more.

Then just about a year ago, Rowe told me at a Seattle Bicycle Advisory Board meeting (he also was the staff liaison to this board) that he had made a leap of faith to take on the city’s plans to invest millions to dramatically expand Pronto Cycle Share with a fleet of e-assist bikes.

“I hope I’m not making a big mistake,” he told me at the time (or something along those lines). The system was already receiving lots of bad press, SDOT Director Scott Kubly had already been fined for failing to file the proper disclosures before working with his former employer and Pronto operator Alta Bike Share (later bought by Motivate). The city had already put out a request for proposals for the Pronto expansion and had chosen Bewegen to provide the equipment and operate the service.

Rowe was charged with developing a good deal for the city and a plan for expanding the system. But the writing was already on the wall for Pronto. The public would never even get to weigh in on the deal Rowe and others at SDOT developed before Mayor Ed Murray killed Pronto and reallocated the expansion funding to other safe streets projects. It didn’t matter what deal Rowe came up with because shutting down Pronto was a political decision.

“January 13 was the day my career died,” said Rowe. Just a few months after taking on the sinking system, it sank.

But that’s when the calls started coming in. LimeBike and Spin were barely companies yet, but they and others were watching the free-floating bike share boom in cities across China, led by giants like Mobike and ofo, and wondering if that could work in the U.S. And since Seattle just shut its system down, maybe here would be a good place to start. Since Rowe was still technically in charge of bike share, their calls and emails got routed to him.

This is where Rowe played one of the most important roles in the whole U.S. free-floating bike sharing story, in my opinion. In winter and spring 2016, nobody in Seattle government wanted to touch bike share. They didn’t even want to talk about it. And why would they? It was a disaster for staff and politicians alike. Advocacy organizations had spent a ton of energy organizing people to support it. Seriously, nobody wanted to talk about bike share (except Seattle Bike Blog). It had just blown up Rowe’s career path and burned up months of his work.

But he didn’t say, “Hell no,” and hang up the phone on those companies, which is what I’m sure many people in his situation would have done. Instead, he put all his chips into bike share again and somehow convinced his colleagues at SDOT and political leaders in the Mayor’s Office and City Council to go along with an innovative new bike share permit concept that no major U.S. city had ever tried. And despite the fact that, again, nobody wanted to touch bike share again, they gave him the green light (the Mayor’s Office, SDOT leadership and City Council deserve serious kudos for this).

In a span of just nine months, Rowe took on Pronto, had it blow up in his hands, developed a whole new bike share regulation, and had bikes permitted and on Seattle streets getting thousands of rides a week, inspiring cities across the nation to follow suit.

It’s too easy to think of bureaucracies like SDOT as faceless entities filled with pencil-pushers, but SDOT has some amazing public servants working hard behind the scenes for all of us. Rowe’s efforts are an exceptional story of how someone young and fairly low-ranking was not afraid to take a chance and, with encouraging leadership, was able to lead an effort that shaped an entire new transportation industry in the U.S. It’s also an example of what the city can achieve when department and political leaders trust their staff and give them the opportunity to pursue bold ideas.

Founder and Editor of Seattle Bike Blog.
View all posts by Tom Fucoloro →
This entry was posted in news and tagged bike share, kyle rowe, sdot, spin. Bookmark the permalink.