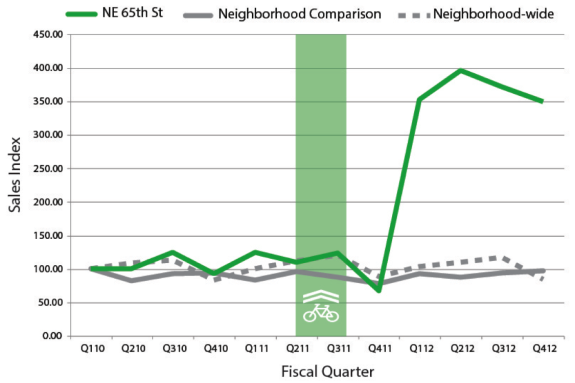 UPDATE 8/16: I understand that pairing this headline and this graphic was slightly misleading, so I want to make it clear that the study quoted here does not have enough data to say this rise is due to the bike lane (or any other cause for that matter). Rather, it’s evidence that installation of the bike lane coupled with removal of a handful of parking spaces was in no way devastating to businesses. There is a lot of evidence that bikes are good for business, but I don’t want to extrapolate either implicitly or explicitly that this study proves a causal relationship between a new bike lane and a 400 percent climb in sales. Even I don’t believe bike lanes are THAT powerful. Well, at least not that quickly…

Ahead of tonight’s town hall to discuss NE 65th Street and the Bike Master Plan (6:45 p.m. at the Ravenna-Eckstein Community Center), it’s important to get a key but perhaps little-known fact about bike lanes out in the open.

Bike lanes are good for business.

Or at the absolute very least, the removal of some car parking to improve biking and walking safety on commercial streets is certainly not harmful to business, as Seattle Transit Blog guest contributor Kyle Rowe found in his recent analysis of several bike lane projects in Seattle, including a section of NE 65th Street between Ravenna and Tangletown:

The second bicycle project studied was the climbing lane installed on NE 65th St, from NE Ravenna Blvd to 1st Ave NE. Although this project only installed a climbing lane for the hilly portion and shared lane markings elsewhere, the real impact in question is the twelve parking spots removed adjacent to the business district at NE 65th and Latona Ave NE. Again, two separate datasets were gathered to provide constants. The neighborhood comparison was the business district referred to as Tangletown – at Keystone Pl. N and N 56th St and the neighborhood-wide data included all businesses in NW Seattle.

The results of this analysis are in the graph above, again with the bicycle lane signifying the construction of the project and the removal of the parking. Leading up to the construction and just afterwards NE 65th St performed very similar to both controls, however two quarters after the project was finished NE 65th St experienced a 350% increase in sales index, followed by another jump to 400% sales index the following quarter.

Studies reproduced in cities across the nation and world have coupled sales data with customer surveys to conclude that bike lanes do, indeed, bring more business to storefronts. Rowe’s study does not include survey data, so it’s not necessarily possible to say for sure that bike lanes are the cause of the increases.

But we can say for sure that the elimination of a handful of parking spaces to accommodate the safer street did not hurt businesses, unless of course the business owners got paper cuts from counting all that extra cash.

This study is especially relevant because this evening, people will discuss the idea of installing protected bike lanes on NE 65th just east of the section studied by Rowe. This is not a study from Amsterdam or even Portland: This is literally a couple blocks down the street.

Some business owners are concerned that the protected bike lanes called for in the current draft of the Bike Master Plan could result in a reduction in parking. Since there is no design plan (or even a budget to create one at the moment), it’s impossible to know if parking would be reduced. But business owners should be aware that even if that were to happen, there is absolutely zero evidence to suggest it would hurt business.

From a 2012 customer survey of neighborhood residents

Business owners might actually be shocked to learn how many of their customers are getting to their businesses by foot, bike and transit. A recent Seattle customer survey in neighborhoods all over the city (NE was not included, but Ballard and Fremont were) found that the vast majority (61+ percent) of residents get to their neighborhood business districts by walking and transit. In Fremont, about as many residents bike to area businesses as drive alone. On Capitol Hill, more residents bike than drive to area businesses.

Since the area around NE 65th Street is home to Seattle’s highest bike commute rate (over seven percent of residents bike commute nearly every day) it is probably safe to assume that the number of people biking to businesses on NE 65th Street is also high, and has tons of room to grow if the street were safe and inviting.

In the end, storefronts need people walking in the front door, and it doesn’t really matter how they get there. The 2012 Seattle survey found that about half of non-resident customers do drive or carpool to other business districts, so some car parking is certainly important. But business owners should keep an open mind about how a safe street can have a much bigger impact on both their bottom lines and the attractiveness and health of their best customers: The people who live within a walk or short bike ride from their storefront.

We all want small business to flourish, and it is clear that business district thrive when the streets running through them are safe for all customers.