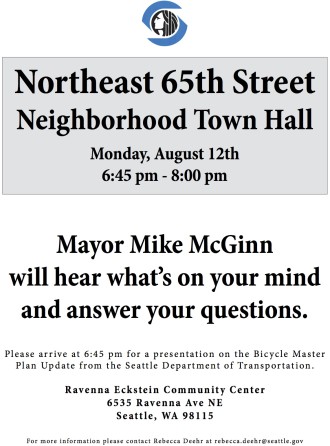 In the whole Bicycle Master Plan update, the idea of a protected bike lane of some kind on NE 65th Street has proven to be the most controversial.

But it also one of the projects with the most promise, both as a way to increase access to the future light rail and the commercial center of the neighborhood, but also as one of the only ways to cross I-5 and safely travel from Green Lake to the northeast Seattle neighborhoods.

Opinions about bike lanes on 65th are all over the board, and there is definitely a lot of misinformation floating around about the city’s plans and some misunderstanding about what the Bicycle Master Plan is. We covered this briefly in our analysis of plans for NE Seattle recently.

Mayor McGinn will hear from neighbors and discuss the street in a town hall Monday evening, 6:45 p.m. at the Ravenna-Eckstein Community Center.

According to the Cascade Bicycle Club’s blog, the Seattle Department of Transportation “received more comments on the NE 65th Street protected bike lane than any other project proposed in the draft Bicycle Master Plan Update.”

Not a surprising observation to hear, especially after a less-than-stellar open house on the BMP Draft on June 13 at Roosevelt High School, and a “small business owners/residents meeting” held on June 23 at the Varsity Restaurant on NE 65th St.

We think it is a fair point to make, for all sides of the issue of NE 65th Street’s place in the BMP Update, that there is a lot of confusion around the issue.