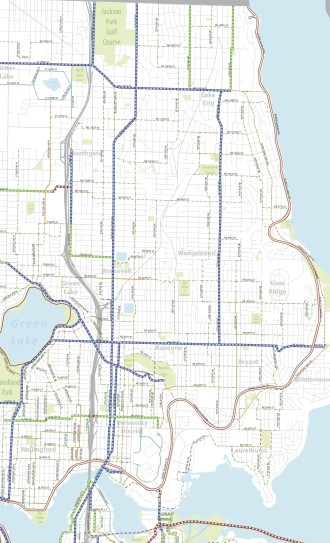 The most controversial aspect of the NE Seattle plan is very likely the proposal for a protected bike lane on NE 65th Street from the Burke-Gilman Trail to Green Lake.

But with the planned light rail station coming in the next decade to 65th and Roosevelt and the relatively few quality nearby options and I-5 crossings, it could also be one of the more bold and smart elements of the plan.

A group of neighbors have started to organize against protected bike lanes on 65th, and I had the chance to have a great chat with one organizer, Mark Briant, who explained some of the concerns.

The biggest problem seems to be with outreach. Some neighbors saw the line on the map and assumed that the city had a plan ready to go and never planned to ask them for input. They are concerned about losing parking and emergency vehicle access on the street, and they clearly don’t trust that the city intends to have a proper outreach process for the project.

However, there is no design or funding for the project. Currently, it is just a line on a map. The 20-year Bike Master Plan, while an important tool for organizing and prioritizing city investments, does not include developed street design concepts. Rather, it simply states the amount of separation a bike facility should have on a street, based on the traffic levels and speeds of that street. For example, the plan calls for some kind of “in-street, major separation” bike facility on NE 65th because the traffic levels are too high for just a plain painted bike lane to be enough for all people to feel safe.

The plan also notes which streets are high priority bike network connections, based on a complicated series of factors including geography (such as less steep hills), equity (all homes should have a nearby safe bike facility) and network connectivity.

While I am hopeful that truly safe bike lanes on 65th could be a great addition to the neighborhood some day, it’s important that everyone understands that big future projects like this will go through a public input and design process if/when they are selected and funded.

In our analysis of the first draft plan, we noted that the biggest impediment to biking in Northeast Seattle/Wallingford is, by far, the lack of safe crossings of I-5. We praised the plan for including improved crossings at 45th, 50th, 65th, 80th, 130th and the new Northgate Station bike/walk bridge.

Unfortunately, both 45th and 50th have both been removed from the plan in lieu of what will likely be a hugely expensive new crossing at NE 47th Street.

While the crossing at 47th would be awesome, there is no momentum to fund such a capital project yet and would likely fall below other projects — such as the Ballard Bridge — on the capital projects list. Meanwhile, there are affordable and non-intrusive options on the existing 45th and 50th Street crossings that should be considered immediately, let alone considered in a 20-year plan. We strongly suggest restoring these crossings (or at the very least NE 45th) to the plan.

Anything else we missed in our analysis of the NE Seattle plans? Let us know in the comments below.