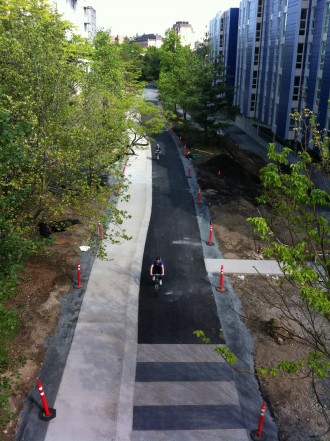 The Burke-Gilman Trail moves as many people through the University of Washington campus per hour during rush hour as a lane of freeway at peak performance. And it does so without emitting pollution and with remarkably few injuries.

Aside from being a beloved space, the Burke-Gilman Trail is a vital transportation corridor for the entire region. But even before the opening of the UW light rail station by Husky Stadium (2016) and the 520 Bridge walking and biking trail (20??), the trail is feeling the stress of congestion that far exceeds what planners had imagined when it was built decades ago.

But the UW has a plan to address these issues, and they are looking for $12 million in Federal TIGER money to finalize funding they need to completely rebuild the trail across their campus before the light rail station opens in 2016.

But they need your help. Endorse the project online today. TIGER money is rarely used for trail projects, but this one has huge regional transportation value and the upcoming opening of the light rail station adds urgency to the project.

The UW already has the funds (including $3.02 million from the Puget Sound Regional Council and $1.6 million of their own) to begin construction on the section of trail closest to the light rail station. The TIGER money would allow them to do the whole project at once. This would greatly reduce the impact on trail users, especially the increased number of people using it in the near future.

The Burke-Gilman through the UW, which may be one of the busiest bike trails in the nation, already has congestion issues. When UW Station opens in 2016, the number of people using the trail during peak hours is expected to increase significantly. The level of service in many key crunch spots is expected to plummet, and safety issues and travel times could become a real problem. By 2030, with two and a half times as many people using the trail, planners expect that congestion will be completely unacceptable if no action is taken.

Plans developed recently would include a redesign of the trail to separate people walking and biking by installing a raised sidewalk, significant improvements to areas where walkways cross the trail to reduce conflicts, a grade-separated crossing at Pend Oreille Road and significant safety improvements to notoriously dangerous intersections at 15th Ave, University Way and Brooklyn Ave.

I’ve seen a whole lot of planning documents in my time writing this site, and the UW’s plans (included below) are imaginative, exciting and practical. You can see a demonstration section of the new trail concepts near the University Bridge, where a short section of trail next to a set of under-construction housing buildings has opened for use.

People biking will be separated from people on foot by a raised curb and sidewalk. Unlike the confusing and rarely used painted walking lanes you may be familiar with on the trail near Fremont, the sidewalk on the new section will have a different pavement style and will be raised a couple inches.

Spaces where paths intersect with the trail will be rebuilt into “mixing zones” full of visual cues that tell everybody they should be prepared to slow down and look out for others. The mixing zone space is at the sidewalk level, and a gradual incline brings people biking into the space in a way that makes it clear that people on foot have the right of way. The brilliance of the design is that no signs are really needed, it simply feels natural to slow down and look out for people crossing on foot. 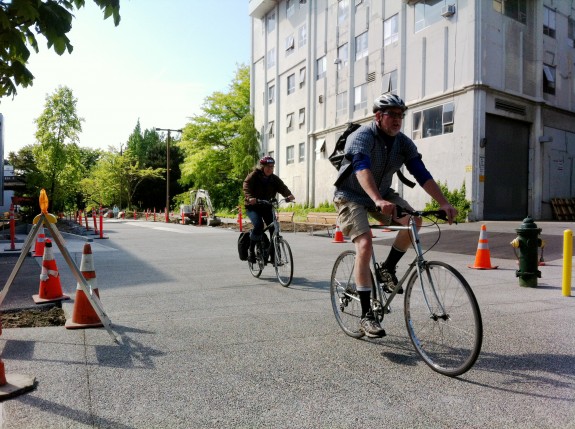 People walking are no longer dumped out directly into the path of people biking. Instead, ramps, staircases and sidewalk crossings all have several feet of buffer space so people have a chance to look for people biking before crossing. Compare this to a typical trail crossing today:

The new way is more comfortable and logical for all users.

Many of the bridges through the campus are old, and it will be expensive or impossible to widen them. Much of the price tag on the project comes from these crossings, many of which require building new structures, such as this one: 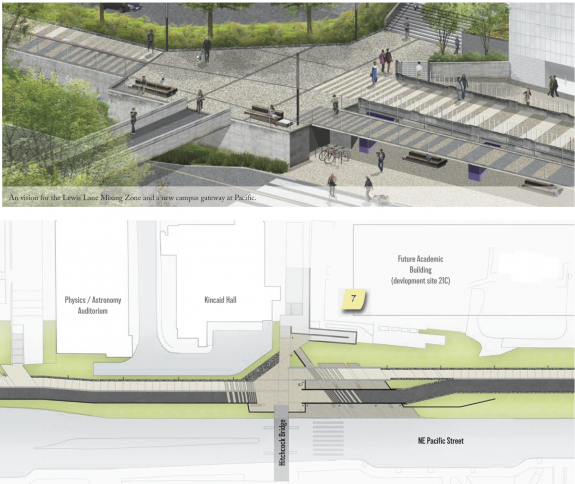 One of my favorite ideas in the plan is how they hope to address the crossing at Brooklyn. Notorious because the trail spits people out into the street with poor sight lines, the new plan would raise the entire intersection like a giant mixing zone (otherwise known as a “speed table”): 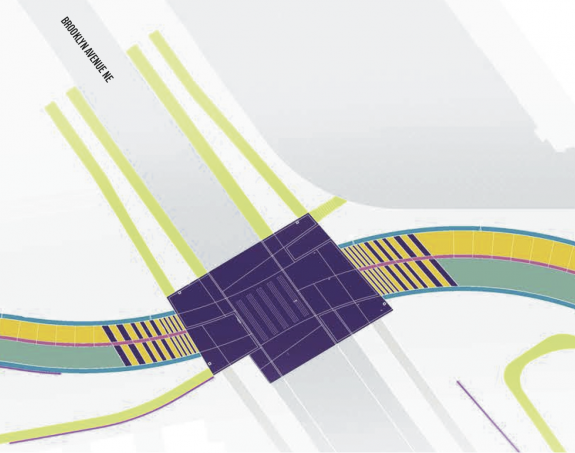 BGT Tiger One Pager 1 by tfooq

Press release about the push for TIGER funds:

Founder and Editor of Seattle Bike Blog.
View all posts by Tom Fucoloro →
This entry was posted in news and tagged burke-gilman, TIGER, usdot, uw. Bookmark the permalink.

35 Responses to Our region’s best candidate for TIGER transportation funds: Rebuild the Burke-Gilman Trail through UW