The community-advised Missing Link design keeps getting better for everyone 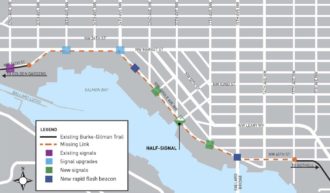 The project includes a bunch of new and upgraded traffic signals, which help everyone.

The Ballard Missing Link of the Burke-Gilman Trail has been debated and challenged in court for two decades, and sometimes it’s hard in such a long, frustrating process to remember what this thing is really about.

On average, about two people crash badly enough every month along the Missing Link that they need emergency medical help. And this will not stop until the trail is complete. If work goes smoothly and legal challenges fail (the weeklong hearing is scheduled to begin November 27), construction will break ground in May 2018, and the final section of the Burke-Gilman Trail will open in May 2019, 41 years after the first section opened between Gas Works Park and Kenmore.

The Burke-Gilman Trail is a gem of our city and carries a major transportation load for the region. Some stretches move as many people during peak rush hour as a lane of a major freeway. And it does it with healthy, fun and safe biking and walking. It’s a beautiful success story we should never forget to celebrate and work to repeat and grow.

Plans for the Missing Link have reached 60 percent design (see updated designs in this PDF slideshow presented to the Seattle Pedestrian Advisory Board), developed through an intense stakeholder process where nearby businesses and people who live and work in the area have scoured every inch of the trail route to make sure business needs are addressed and safety is a priority.

Below is a look at the latest version of the trail plans, starting at the Locks and heading east:

Today, the trail from Golden Gardens ends abruptly at the parking lot for the Ballard Locks. The compromise plan would route the trail up NW 54th Street toward Market Street instead of following the rail line. One major benefit of this design is that the redesigned parking lot access should help calm a sometimes chaotic driveway where people are trying to enter, exit and wait for their fish and chips all in the same spot. Instead, people turning left into the parking area will be directed to a new turn lane at the west end of the lot. 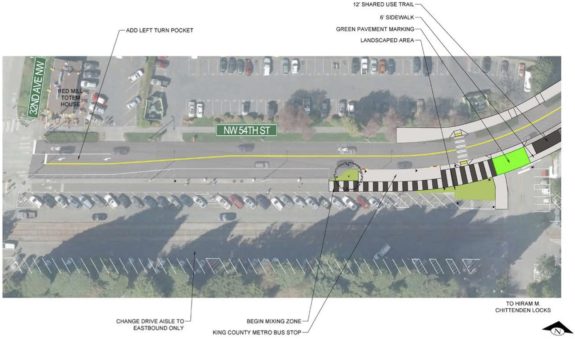 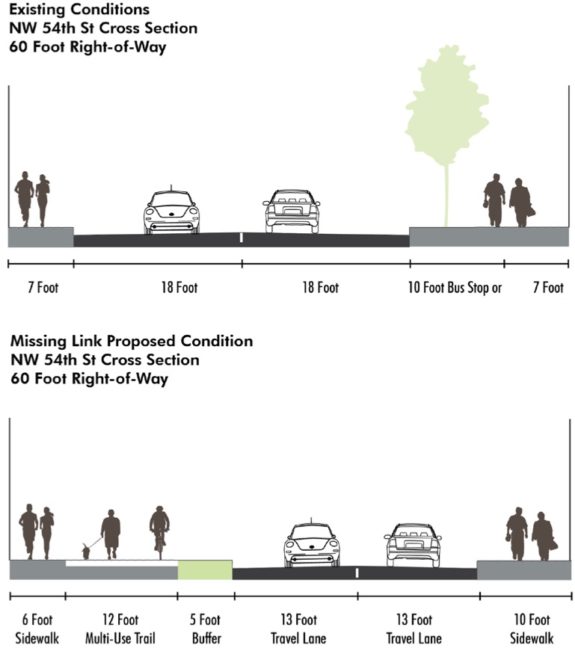 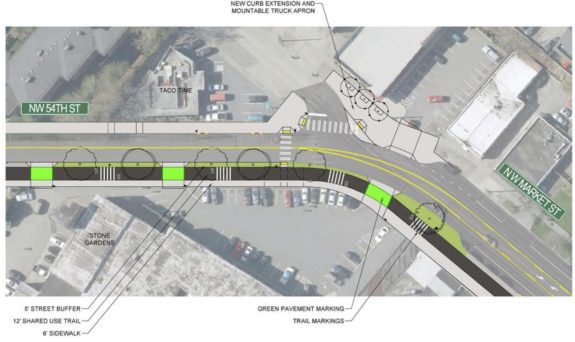 The trail curves onto Market, where a new safe street project will realign the lanes to create a new center turn lane. This stretch of Market is far less busy than the section east of 24th Ave NW, so a road safety project like this is a no-brainer. It will reduce collisions and injuries while also making the street much easier and less stressful to cross on foot. The original plan for the trail would not have been routed on Market, but this street safety upgrade is one of the best side benefits of the compromise trail route. 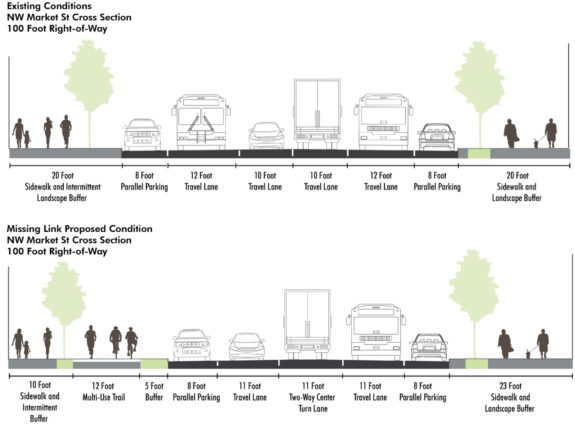 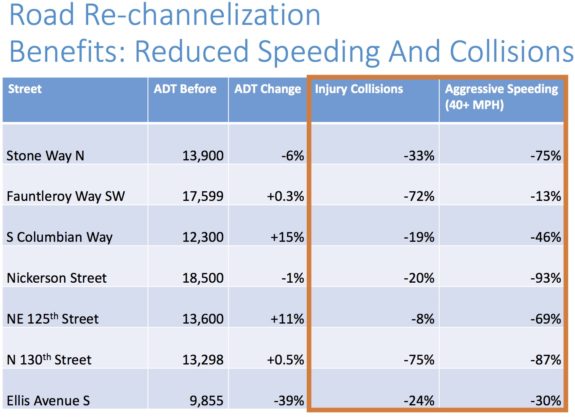 As we reported ahead of some public meetings last month, the trickiest part of the compromise route is the Market/24th Ave NW intersection. Businesses are located close to the corner, and some of them currently have sidewalk cafés. The trail plan basically calls for a big mixing zone, where trail users and people on the sidewalk will all come together and navigate around each other. 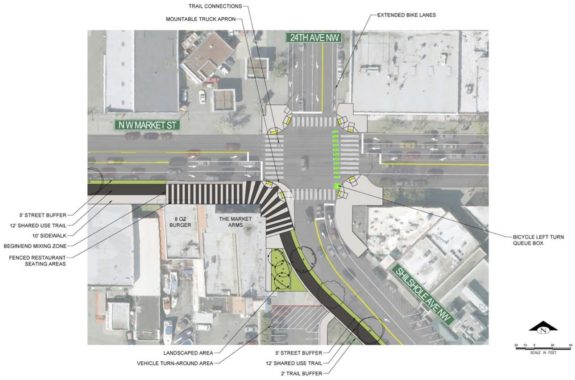 Perhaps the coolest solution the project team has developed for this corner is a mountable truck apron, which is basically an inclined bump-out designed to encourage slower, safer turns and to create a buffer between people turning and people on the sidewalk. For every car and many trucks, driving around the bump-out is easy. But for really big trucks that make wide turns, the bump is designed to be driven over. So you get many of the safety and comfort benefits of an extended sidewalk while still supporting industry. It’s a win-win.

Here’s an example, from a recent SDOT presentation to the Pedestrian Advisory Board: 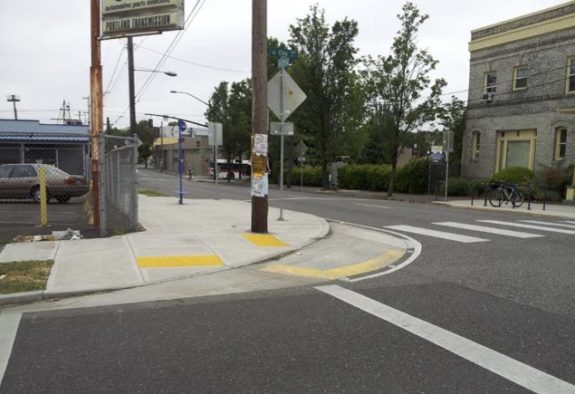 Once south of Market, the latest designs get pretty interesting. The current proposal is to close access to 24th Ave NW south of Shilshole. You can see int he map above that the trail will close this entrance, creating a dead-end parking area. Here’s the driveway today: 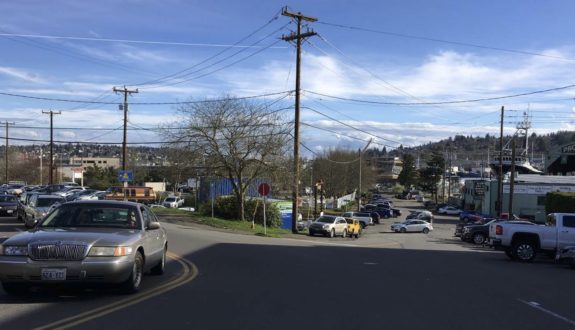 So instead of accessing that area from that wide, uncomfortable intersection, the city will build a new road access further down Shilshole adjacent to the rail line: 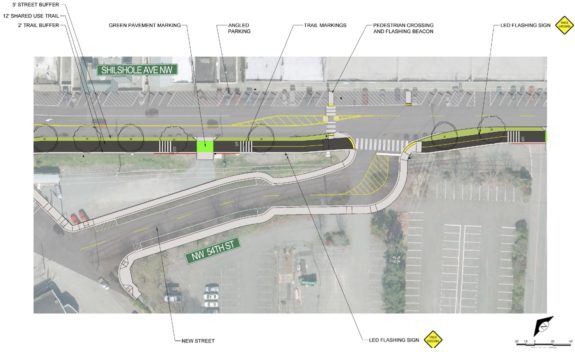 That’s right, the Missing Link is building a new road for business access. People are still trying to pit this project as people biking against industry, but the collaborative design process is shaping up to include benefits for everyone.

The Shilshole design is mostly familiar to those following this project, but it’s always exciting to see new concept images. The geometry of the industrial driveways has been closely scrutinized, and driveways will now include flashing LED warning signs to help avoid any conflicts. This project is going to be truly amazing. 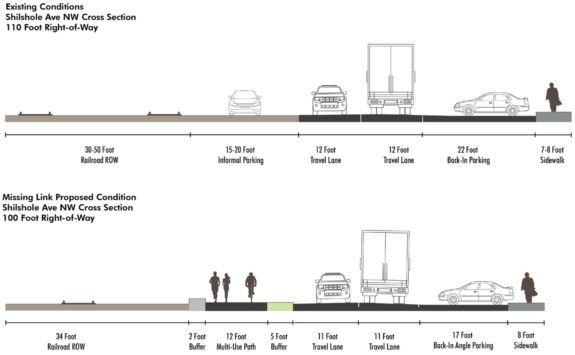 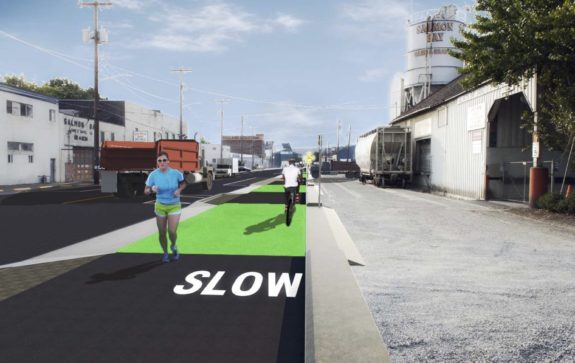 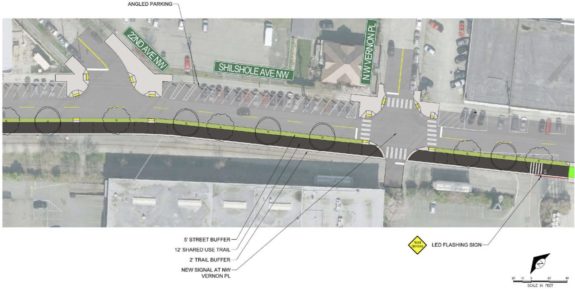 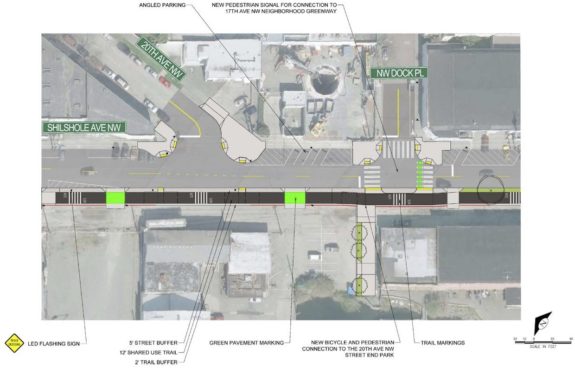 The rail crossing will now happen before the turn onto NW 45th Street. Today, the bike route crosses the rails under the Ballard Bridge, and that crossing is the epicenter of injuries. The new crossing will cross a rebuilt rail line at a much safer angle, which should make it much less common for people’s wheels to get caught in the rail gaps. 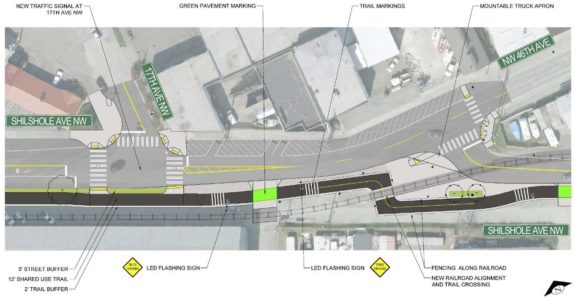 NW 45th Street will be essentially rebuilt. The trail will be on the south side of the street, and a new road will be constructed on top of the orphaned rails (which will remain technically active, though barely ever used). 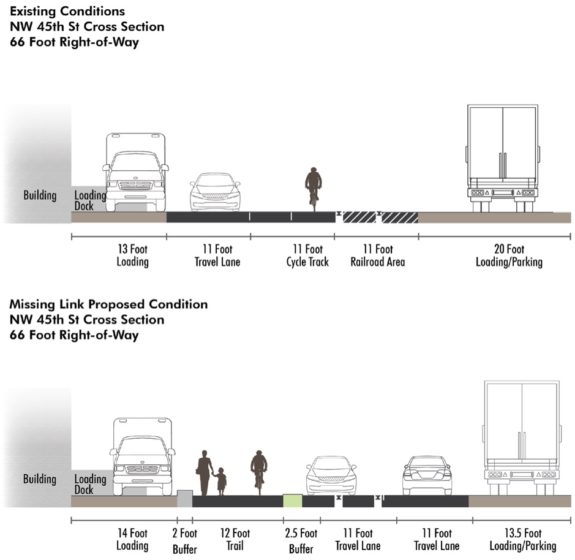 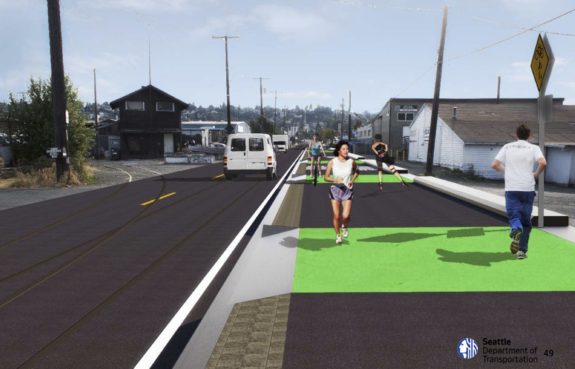 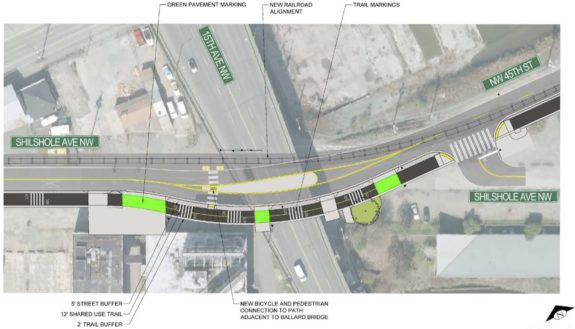 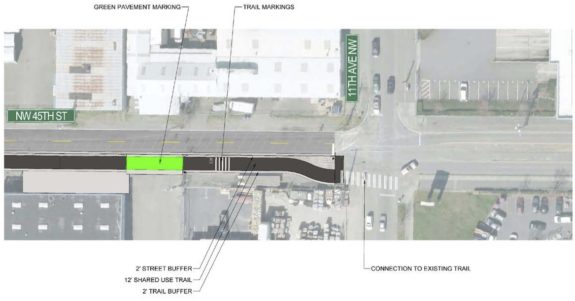 And that’s it! The trail meets up with the current terminus near Fred Meyer. And because it’s on the south side of the street, that confusing intersection will be much simpler. And two-way traffic will be restored on NW 45th Street when the current bikeway is removed. So that’s another significant benefit for people driving cars and trucks.