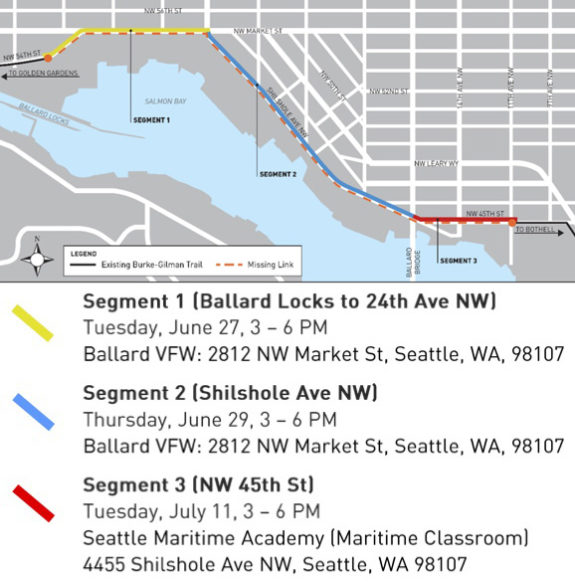 From an SDOT flier (PDF).

The Ballard Missing Link of the Burke-Gilman Trail is headed back into litigation.

But despite the pending legal action, the city is still working through the community design process that was was part of the February compromise agreement between SDOT, trail supporters and a group of longtime trail opponents.

The city is hosting three drop-in community design workshops starting this week and culminating in an open house next month. The image above lists the times and dates for each meeting, including a map of the segments under discussion. You can drop in at any point during the workshop, according to a Cascade Bicycle Club email.

“Cascade is working with a diverse set of neighborhood, maritime and industrial stakeholders on the Missing Link Design Advisory Committee (DAC) to ensure that freight and industrial needs work together with a safe and connected trail,” Cascade wrote.

The DAC is tasked with working through all the nitty-gritty details with stakeholders, including how to make sure driveway crossings safe for everyone while also maintaining access to businesses. SDOT and Mayor Ed Murray successfully convened such a group to create the Westlake Bikeway.

Once again, Cascade will intervene on behalf of the city to help with legal work defending the Missing Link plan, though they have gone with a different legal team this time (Matthew Cohen and Rachel H Cox of Stoel Rives).

It should be harder to successfully stop or delay the project now that the city has completed a massive $2.5 million Environmental Impact Statement that studied the trail alignment options, traffic and the surrounding area at intense detail (the study spent about $340 studying each foot of the proposed trail and, including appendices, clocks in at one page for every 4.7 feet of trail). But after decades of public debate and legal action, an idiom about counting chickens comes to mind. 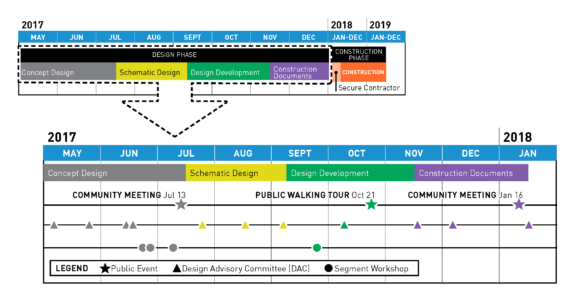 The project timeline puts the trail on schedule to break ground at the start of 2018, barring legal delays.

The makeup of the appellant group has changed significantly since the 2012 appeal that successfully forced the city to go back and conduct the full megastudy before building the trail. Though the appellants have lost some big names, they also gained some new ones. And at least one party involved in the compromise has signed onto the lawsuit, anyway.

“I too have been working in this project for a decade, so it’s nice to see that soon I’ll be able move onto something else,” he said. In the mayor’s official press release, Wasserman went even further.

“This plan balances the needs of maritime industrial businesses and the community,” said Wasserman in the press release. “We look forward to working with the City, bicycling and pedestrian advocates, and Ballard residents in a manner that meets the needs of everyone that uses this corridor and maintains the vitality of the Ballard maritime industry.”

Wasserman’s involvement in the compromise led Mayor Murray to essentially pronounce the debate and legal fight over.

Despite being a party to the lawsuit, Wasserman said via email that the NSIA is “still supportive of Mayor Murray’s compromise as long as the final design is safe.” They are also supportive of the design group’s work, he said. So the NSIA is trying to keep a foot on both sides.

When Seattle Bike Blog asked Murray during the press conference if the agreement meant businesses had agreed not to pursue more legal action, he said, “I feel pretty good that we have a track record” of getting lawsuits dropped.

And the compromise and community design process is still going strong with support from longtime trail opponents, such as Ballard Oil. Owner Warren Aakervik praised the city’s compromise route during the February press conference. And he stood by his word.

The appellant group also lost the Ballard Chamber of Commerce (now called the “Ballard Alliance”), a sign that the tide among local business owners has shifted toward the trail compromise.

But as we reported last week, the appellant group picked up some big labor groups, including the Teamsters and the MLK County Labor Council. CSR Marine, which hosts the annual body painting party before the Fremont Solstice Parade bike ride, is also now listed as an appellant. The company has opposed the trail previously, but was not listed on the 2012 appeal.

The appellants are trying to force the city to create a new Environmental Impact Statement, saying the current one is “inadequate.” Seattle Hearing Examiner will convene a pre-hearing conference July 6 to set dates. If the Hearing Examiner sides with the city, the appellants could appeal to King County Superior Court. If that happens and the court again sides with city, that should be the end of the line for legal action.

It’s not yet clear whether all legal questions can be wrapped up in time for construction to start in  May as currently scheduled (UPDATE: At the Tuesday meeting, SDOT staff said the expected construction start date is in May. January/February is when the bids will be put together and go out to contractors).