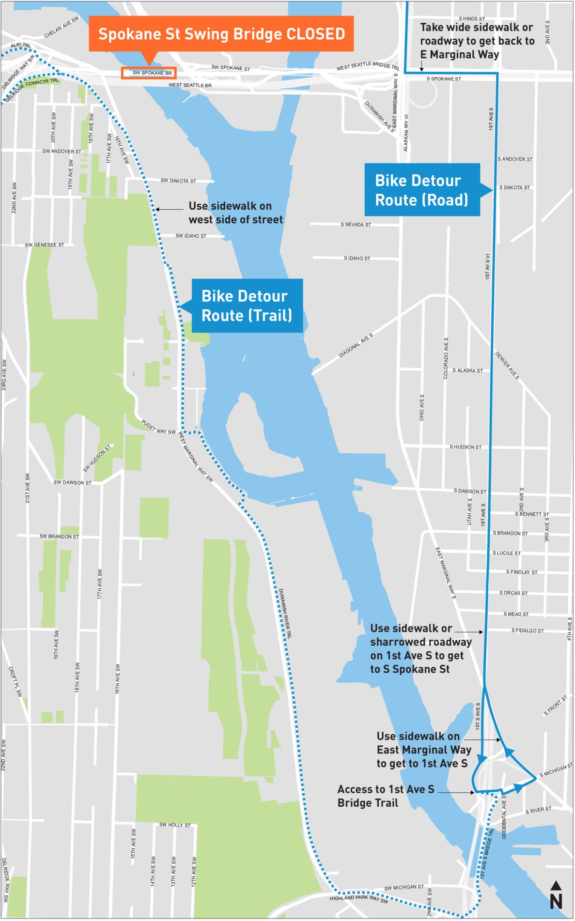 People in West Seattle have put up with a lot in recent years. When the Viaduct closed in January 2019, people listened to city leaders and hopped on their bikes to avoid adding to the traffic crunch. Thanks in large part to their efforts, the anticipated traffic problems never materialized. People took more bike trips in the middle of January 2019 than they did during warm summer days. People again took to bikes in big numbers when the Upper West Seattle Bridge closed suddenly in early 2020, again taking a load off the city’s strained streets. And they did all this without any significant bike infrastructure improvements. It’s time for the city to come through for people who bike to and from West Seattle by making sure they have a safe and connected bike route during the current closure. Safety is not too much to ask.

The official City of Seattle bike detour directs people down the Duwamish Trail to the 1st Avenue South Bridge, which is really the only option along the west side of the river. This route is almost great except for a short section of missing trail just south of the Spokane Street Bridge. SDOT under Mayor Jenny Durkan delayed a project to complete that trail, yet another poor decision by her administration that has come back to bite Seattle. The West Marginal Way SW Safety Corridor Project has already gone through years of outreach and study, so SDOT should consider putting a temporary version in place immediately that can be upgraded once the Spokane Street Bridge reopens: 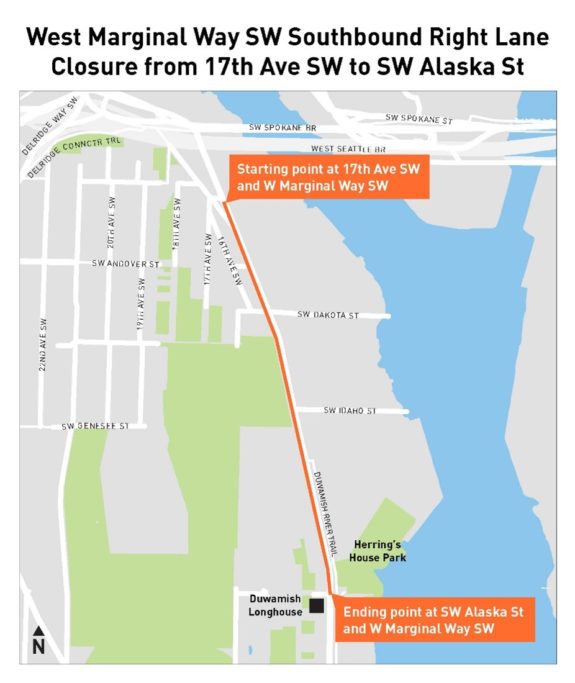 The official detour then heads back north along 1st Ave and Spokane Street, neither of which have bike facilities. I cannot in good conscience recommend this route to people who are not familiar with the area, at least not in its current condition (Bob Svercl helpfully put together a map of a longer and somewhat more friendly detour route). As we noted in June 2018 following a six-day emergency closure of the Spokane Street Bridge, “People who have never biked through SoDo before discovered just how neglected the bike network is in that major job center.” We argued for bike lanes on 1st Avenue S, which had been included in the first draft of the Bicycle Master Plan but were dropped in favor of a trail along E Marginal Way. A decade ago, we argued that 1st Ave S should be in the Bike Master Plan, an argument especially strong now that the E Marginal Way project no longer includes funding for a bike facility connecting to the 1st Avenue Bridge.

It is very frustrating that in the four and a half years since the 2018 Spokane Street Bridge closure, Seattle has done nothing to make the situation safer despite significant community organizing and advocacy efforts to propose solutions. 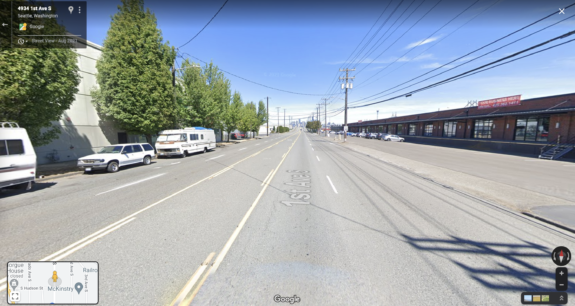 The good news is that the solutions are not all that difficult here. Every north-south street in SoDo is dramatically oversized far beyond what is actually needed to carry the traffic there. When there are traffic backups, they are due to freeway, bridge and railway limitations, not the amount of available roadway on E Marginal Way, 1st Ave S, 4th Ave S or Airport Way S. Even more, the lanes are often much too wide, which encourages speeding and makes these streets even more dangerous. The problem is exacerbated by the fact that on-street parking is often unoccupied, which makes the lanes feel like they are an absurd 23 feet wide at times. The solution here is not very difficult to see:

Below is one possible example I threw together quickly that does not even reduce the number of general purpose travel lanes. I’m not saying this needs to be the design, but I hope it highlights the potential for changes. You can play around with designs on your own using this link.

There is also an entire extra lane on westbound Spokane Street between 1st Ave and the Alki Trail. There are two lanes eastbound, but three wide lanes westbound. Considering the sidewalk has utility poles and bridge support columns in the middle of them, the northern curb lane could be turned into a two-way bikeway: 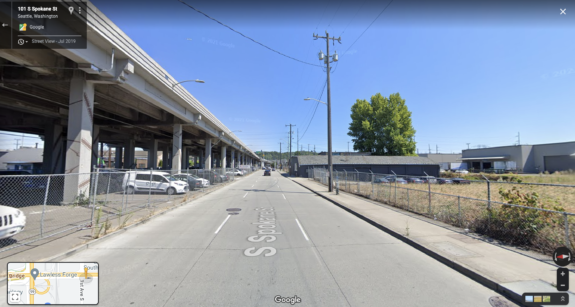 Creating two miles of new bike lane is not a small feat, but these are the moments where SDOT and the city’s elected leaders can rise to the challenge and show the people they can do great things. Building it in such a short timeframe would be a marvel, more impressive and dramatically less costly than the many pieces of towering car infrastructure covering the area. Crews could even confiscate and repurpose the many illegally-placed concrete eco blocks that have been abandoned in the public right of way all over SoDo, using them as bike lane barriers instead. Just spitballing here.