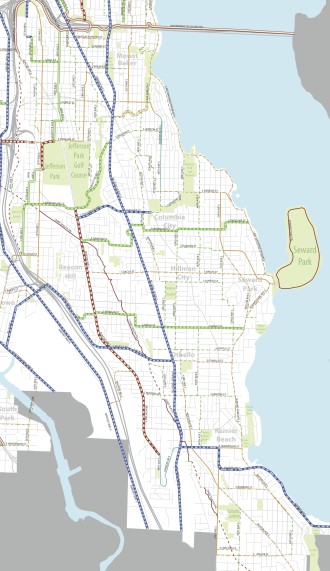 During review of the first draft of the Bike Master Plan, we said this:

While changes to Rainier would certainly be the most controversial project in southeast Seattle, it also has the greatest potential to revolutionize not only the bikeability of southeast Seattle, but also dramatically increase walking safety.

Unfortunately, this remains true in the second draft of the plan. In fact, very little has changed in the plan for SE Seattle/Rainier Valley. Since this is meant to be a 20-year plan, does this mean the city aspires to keep Rainier Ave as one of the city’s most dangerous streets until at least the year 2033? The residents of Rainier Valley deserve better than that.

Aside from Rainier Ave, the plan for Southeast Seattle still includes much-needed neighborhood greenways and ambitious plans for protected bike lanes on MLK (apparently the excuse for not including protected lanes on Rainier). It also includes bike lanes on Lake Washington Boulevard and Seward Park Ave. The plan also suggests completing the gaps in the Chief Sealth Trail (especially the very confusing gap south of S Myrtle Pl by New Holly).

There is a little work to do on the Beacon Hill plan. For one, there is no all-ages-and-abilities connection from the Jose Rizal Bridge to the heart of the neighborhood and the solid Beacon Hill Neighborhood Greenways network as proposed by the excellent community organization Beacon BIKES. There is a bad gap on 12th Ave S north of Massachusetts and another on 14th Ave S north of Beacon Ave (Hill St is, well, too hilly for a bike route. So hilly that at least one block of it is a staircase). Or 15th could be upgraded to a truly safe bikeway, which would be faster and flatter, but would not serve the neighborhood to its west very well due to geographic issues.

The plan also calls for a trail on Spokane St between 14th Ave S and Sodo that I can only assume is either a mistake or a completely awesome and super hilly trail through the greenbelt and under I-5.

But the biggest missing piece in the Beacon Hill plan is a safe bike facility on Beacon Ave through Jefferson Park. This was on the original draft and is absolutely vital and achievable (there is plenty of space). There is simply no reasonable alternative to having a safe bike facility on Beacon Ave through this section, which is the most direct connection between the north and south ends of the neighborhood. Since the bike commute rate drops dramatically south of Jefferson Park, a safe Beacon Ave could help bridge the bikeability gap and should be added back to the plan.

Even when there is no train, there are very few connections (and even fewer safe connections) between E Marginal Way and 1st Ave S. So if the impetus for removing 1st ave S from the plan was due to plans for a safe bike facility on E Marginal, that decision should be revisited. They might look close together on a map, but they are in no way interchangeable as bike routes.

If you observe 1st Ave today, you see there are already a lot of people biking there even without anything resembling a safe bike facility. There is a clear need for a safe facility here today, let alone in the next 20 years. Since such a project would not affect freight mobility, it should be added back into the plan.

Stay tuned this week for posts about the rest of the city. If you believe I missed anything here, be sure to say so in the comments below.