UPDATE: The Lower Spokane St Bridge is back open again to all pedestrian, bicycle and vehicle traffic! Thank you to everyone for your patience and understanding. 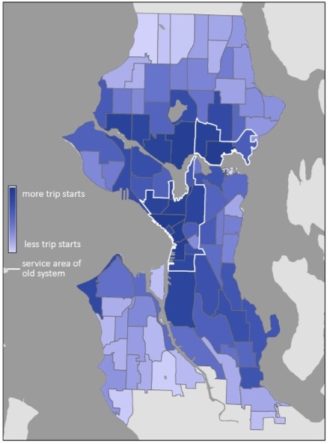 Map of trip starts from an SDOT presentation on the bike share pilot. Sodo is a major source of bike share trips.

The lower West Seattle Bridge has reopened following a more than five-day emergency repair of the vital biking and walking connection between West Seattle and the city center. The swing-style bridge was closed in the “open” position for maritime traffic during the work, forcing people biking to follow a miles-long detour to the 1st Avenue Bridge that required navigating industrial streets through Sodo that were in no shape to serve as a trail detour.

SDOT did run commute-time shuttles during the weekdays to help some people get around the closed bridge. But a shuttle is no replacement for a bridge, and people traveling outside commute times (or who did not know about the shuttle) were left with few good options for crossing the Duwamish River. And people who have never biked through Sodo before discovered just how neglected the bike network is in that major job center.

Of course, none of this is news to people who bike to work in Sodo or live in Georgetown, South Park, Allentown or many other South Seattle and South King County neighborhoods that require them to bike through the area regularly. And early bike share trip data highlights Sodo as a major source of rides. This data points to a big blind spot in local bike advocacy, which tends to focus on office job centers, retail businesses and neighborhoods rather than industrial areas. A ton of people are biking in Sodo despite the lack of safe routes.

The official bike detour for the bridge closure sent people down 1st Ave S, a very wide street with no bike lanes. To get a taste of how uncomfortable that route is for people biking, Robert Svercl made a little video:

Made a video for navigating around the West Seattle Bridge closure by bicycle – finished it in less than a day, so few bells and whistles, but the route should be easy to follow – hope it helps @SNGreenways @seabikeblog https://t.co/hWAV2ny4Nq #SEABikes #bikeSeattle

And 1st Ave doesn’t just feel dangerous, it is deadly. Celso Diaz was killed at 1st and Andover while biking to work in November.

We argued during the development of the 2014 Bicycle Master Plan that 1st Ave S is a vital bike connection. A protected bike lane there was included in the first draft, but was deleted in the second. At the time, we called this omission “a huge mistake”:

The Bicycle Master Plan calls for a trail and protected bike lane connection along E Marginal Way in lieu of any changes to 1st Ave S. While the two streets appear interchangeable on a map, there are very few opportunities to cross the train tracks that separate them. If you are a bird, they are very close together. But on a bike, they might as well be opposite sides of the neighborhood.

But to make matters worse, an under-developement project on E Marginal Way does not include plans for the trail suggested in the Bicycle Master Plan connecting Diagonal Ave to the 1st Ave Bridge. This omission is unacceptable, and I hope Seattle’s elected leaders direct SDOT to make sure this trail is included in the project.

If the city really doesn’t add this E Marginal Trail connection, then that’s all the more reason to add and fund 1st Ave S bike lanes in its place.

The recent bridge closure happened too fast to mount a serious campaign to pilot protected bike lanes on 1st Ave S. But the idea is still good. SDOT could try out protected bike lanes on the street using low-cost materials like paint, posts and maybe some parking stops or planter boxes (which would dramatically increase the amount of greenery in the area). The bike lane could also demonstrate how smart street design reduces conflicts with freight, creating a win for everyone.

And I mean, just look how much space there is on this street:

A group of neighbors organizing under the name Duwamish Valley Safe Streets have done amazing work to advocate for a trail that would connect Georgetown and South Park. The city should support these neighbors by also connecting their local streets to downtown and the rest of the city’s bike network.

It’s well past time to stop neglecting bike routes in Sodo. We can do this.