Q13: Man killed in Sodo was biking to job where he worked his way out of homelessness. RIP Celso Diaz 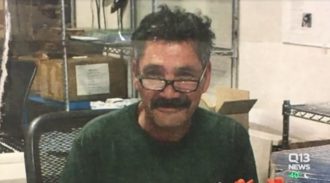 Celso Diaz was biking to his job at iClick’s Sodo warehouse November 21 when someone driving twice the speed limit struck and killed him while he crossed 1st Ave S at S Andover Street.

The suspect, driving a light-colored Toyota Prius, never stopped and is still on the run.

Diaz, who co-workers and friends told Q13 News went by Pete, died at the scene. He was 61.

Edward Cozarg, a friend and one of Pete’s co-workers at iClick, told Q13 that he met Pete a half decade ago. At that time, Pete was living in an encampment along I-5 between Beacon Hill and Sodo commonly referred to as “The Jungle.” Working at iClick, Pete was able to move into his own place.

“This is a human being. I hope they catch him, that’s all. He really was a gentle man,” says [co-worker Min] Seo.

Cozarg said just five years ago Pete was homeless and living in ‘The Jungle’ encampment.  Cozarg took him into his home and said Pete really turned his life around; he even got a place of his own. He says he was a true friend. And that is why it’s so important for them to get Pete the justice he deserves.

Crime Stoppers is offering a $1,000 reward for any tips that lead to an arrest, including anonymous tips. The 2010-15 Prius likely had “damage to the fog lights, the front hood near the headlights and the windshield by the rear-view mirror.”

16 Responses to Q13: Man killed in Sodo was biking to job where he worked his way out of homelessness. RIP Celso Diaz