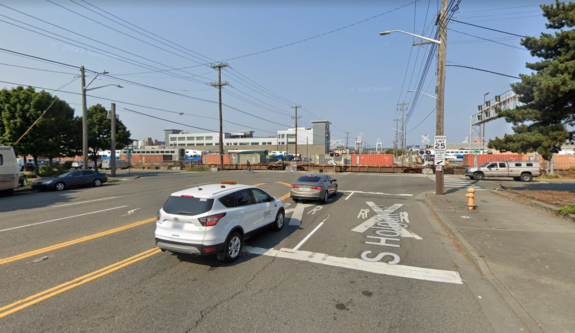 Four days into 2022, someone riding a bike in SoDo, at the intersection of S Holgate Street and 3rd Ave S, was struck by someone driving a Hyundai Accent. Receiving substantial injuries in the crash, including a badly injured leg. The cyclist, Antonio Tiongco, was recorded as having his address registered at a social service agency in Belltown, and was presumed by the King County Medical Examiner’s office to be homeless.

Tiongco’s death was not noted by any major news outlets in Seattle, being one of at least twenty-one people presumed homeless who died in King County in just that month alone. So far in 2022, that number has reached 64, according to the medical examiner’s online dashboard. 188 people presumed homeless died in 2021, an increase from 167 in 2019. “Accident” is the leading cause of death, making up 62% of 2021 deaths and 72% of 2022 deaths.

The recently obtained police report details how the crash occurred, on a rainy January evening just before 5pm, nearly a half hour after sunset. The driver of the Hyundai was in the left lane of westbound Holgate heading toward the railroad tracks that cross Holgate just west of 3rd. Tiongco was attempting to cross Holgate at the same time. Traffic on 3rd has a stop sign, but there is no stop sign on Holgate at the intersection. Since October 1, 2020 people riding bikes can treat stop signs as yield signs in Washington State; there is no way to know whether Tiongco didn’t see the approaching vehicle coming or misjudged the distance on a rainy night. “Based upon my review of patrols investigation and interview of [the] driver…the proximate cause of this collision was Tiongco’s failure to obey the traffic control device (stop sign) and the grant the right of way to the 2014 Hyundai Accent,” the final report on the collision investigation states. Tiongco survived for ten days, passing away from his injuries on January 14th, 2022. 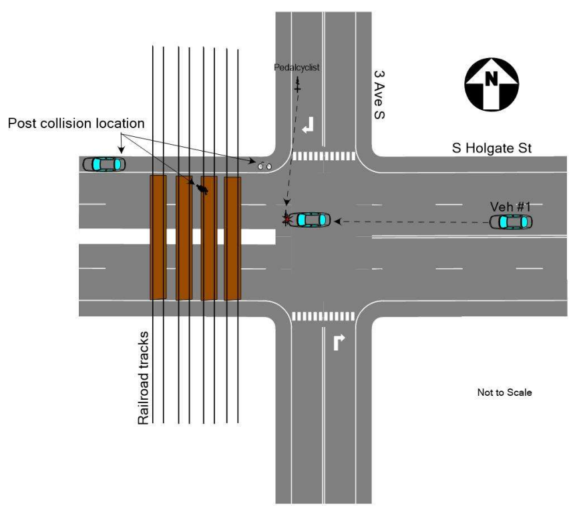 SODO is one of the most dangerous neighborhoods in Seattle for people to walk or bike in. In 2017, Celso Diaz was killed at 1st Ave S and S Andover Street where he worked. Diaz had been formerly homeless but had secured a place of his own to live when he was struck and killed by someone going twice the speed limit, who fled the scene.

Almost exactly two years before the 2022 incident, on January 7, 2020, Douglas Mayhew was walking across Holgate at 8th Ave S, where there is no marked crosswalk, when he was struck by the driver of a vehicle. He later died of his injuries. On October 2nd of that year, another pedestrian was struck and killed at 1st and Holgate. SoDo’s wide streets and unforgiving intersections are not designed with the safety of people outside vehicles in mind.

Our condolences go out to the family members and friends of Antonio Tiongco.