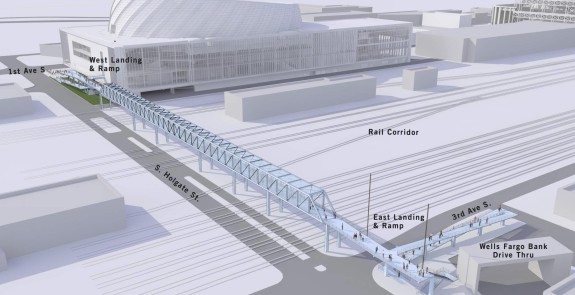 Concept art for the proposed Holgate pedestrian bridge. Images from a presentation to the City Council’s Sustainability and Transportation Committee (PDF).

The team putting together a plan for a new arena directly south of Safeco Field plans to build a new pedestrian bridge over the train tracks on S Holgate Street as part of a multi-million dollar public benefits package to pay the city for Occidental Ave, which lies in the path of the proposed arena footprint.

This project has sparked controversy for some (especially freight companies) and hope for others (especially for those who want an NBA team in town). But for the sake of this blog, we are only going to be looking at the impacts and proposed public benefits that affect biking and safe streets. Ultimately, I’m pretty sure the project will live or die based on other factors, but I’ll leave that story to other reporters.

One of the major hurdles for project approval is the “street vacation” of Occidental Ave, since that requires City Council approval. That’s why the Seattle Arena team is headed to the City Council Sustainability and Transportation Committee tomorrow (Tuesday) during their 2 p.m. meeting.

The proposed pedestrian bridge is billed as a biking and walking facility, but as shown in a presentation to the committee it is really more of a walking facility with tight switchback ramps at both ends that add significant distance to the journey. The west end of the bridge will provide direct arena access, and the east end of the bridge will drop people at the Sodo Trail about a half mile south of Stadium Station.

People biking would likely use the bridge when trains are blocking Holgate, but that’s really it. At other times, biking up and down the ramps adds significant distance and climbing when you can just bike two blocks over the tracks. Using the bridge will be even less appealing before and after games when the bridge is crowded with people walking.

Now, if there were a complete and direct trail connection to the Mountains to Sound Trail that didn’t include tight switchbacks, that could be an incredible addition to the regional bike network and provide great arena access from Beacon Hill, the International District, the Central District and the Eastside. 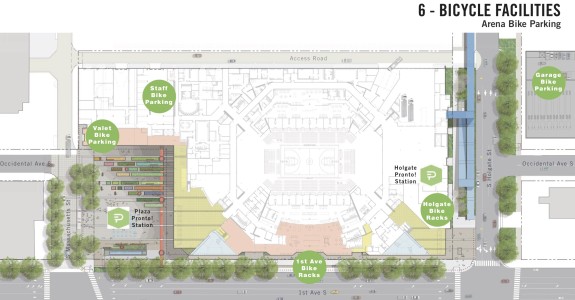 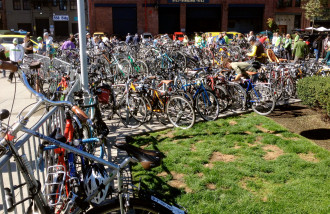 Bikes outside a Sounders game.

I would hope they are planning for way more bike parking than is currently available at Century Link and Safeco Fields. Sounders games bring a huge number of bikes, and the temporary bike racks outside the stadium are consistently filled to the brim. The bike cage in the Safeco garage is rarely full, though I suspect most people don’t know where it is or how to get there. Which brings us to our next point… 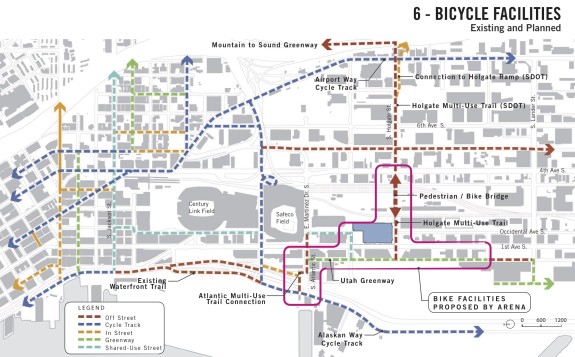 Because of a previous Occidental Ave street vacation for Safeco Field, 1st Ave S is the only street that directly connects from Pioneer Square to both the south side of Safeco Field (including the bike cage in the parking garage) and the proposed arena. As noted in the arena’s environmental impact statement, “A majority of the bicycle traffic was concentrated along 1st Avenue S. where there are sharrows or shared lanes.”

If people are choosing to bike on an extremely wide and busy street that only has some painted sharrows, it’s pretty clear that 1st Ave is the only viable route option, at least from the north. If there were a better street, people would use it. But there isn’t.

Occidental is currently a low-traffic route for people headed to Safeco Field from the south, so vacating Occidental for the new arena will have a direct negative impact on bike access to Safeco and the Edgar Martinez Drive bridge. And the only option that will adequately mitigate this loss is to build protected bike lanes on 1st Ave S.

The Bike Master Plan was created before this arena plan was released, so it’s appropriate to take another look at its suggested routes in light of this new major development. The first draft of the Bike Master Plan included protected bike lanes on 1st Ave S, and I strongly supported them at that time. When they were cut from later drafts and the final plan, I argued:

Even industry spokespeople know that 1st Ave is dangerous and uncomfortable. In this 2013 bulletin from the Manufacturing Industry Council, Executive Director Dave Gering talks about how his foot was run over on the sidewalk of 1st Ave while giving an interview about Sodo traffic and the proposed arena. He also spoke about a series of tragic biking and walking deaths and serious injuries, including the death of Lance David on E Marginal Way:

Knowing that most people on bikes are going to want to access the new arena using 1st Ave — and knowing also that the sidewalks are not wide enough to accommodate biking and walking before and after games — building protected bike lanes on 1st Ave S is the only option that makes sense for bike access.

But beyond arena and stadium access, protected bike lanes are also the best way to separate the many modes trying to get around safely and efficiently in Sodo. Biking in “shared lanes” on a busy street like 1st Ave S is not a comfortable experience, but neither is driving a large truck in shared lanes with people biking.

1st Ave connects downtown to a huge number of jobs in Sodo and to neighborhoods like Georgetown and South Park. Neither the Alaskan Way Trail nor E Marginal Way has easy access to large sections of 1st Ave, so they can’t be considered alternatives even though they look nearby on a map.

The arena plans include a neighborhood greenway on Utah Ave S, an already low-traffic access road west of 1st Ave. Well, low traffic except for game days when people are trying to score a deal on parking. Today, Utah does not have direct access to Pioneer Square, so it’s not an alternative to 1st Ave S bike lanes.

The arena plans call for a new trail link to the Alaskan Way Trail, somehow traveling across the Hwy 99 tunnel’s south portal (if the tunnel is ever finished, of course). This connection could be great, but there are a whole lot of “ifs.” And even if it were complete, it’s still not as direct as 1st Ave S. It should be considered in addition to bike lanes, not as an alternative.

Here’s the list of bike facilities the city currently plans to require as a condition of the Occidental Ave vacation:

Most funds go to cars and trucks

Finally, a note about funding. Though the pedestrian bridge carries a hefty $15 – $18 million price tag, it’s nothing compared to the investments in cars and trucks. The arena project would spend $45 – $65 million on a new parking garage and contribute a yet-to-be-determined amount to the $140 million Lander Street Overpass project.

If we’re going to build this arena, let’s make sure bike access is done right. If it’s comfortable and direct enough, a big chunk of fans will be able to get there by bike just like they do to Sounders games. And better yet, Sodo will be a safer place to work and play.