With the upper West Seattle Bridge closed, bike trips across the low bridge are higher than non-outbreak years 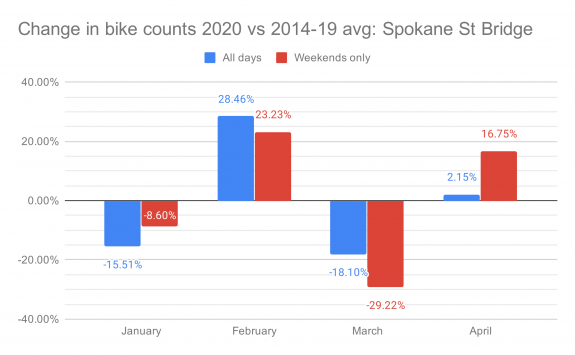 As we already saw in our previous post, the covid-19 pandemic has totally scrambled the typical ridership data collected by Seattle’s 24/7 bike counters. On the Fremont Bridge, for example, total ridership is down about 20% compared to the 2013-19 average, but weekend ridership is up a stunning 71%.

But the Spokane Street Bridge, the low bridge to West Seattle, has a more complicated story because the city closed the high bridge March 23 due to concerns about cracking and damage. As a result, biking has become the most reliable way to get across the Duwamish River for many residents.

The bike counts show that bike volumes tanked in March as the shutdown hit and many people either lost their jobs or started working from home. This was the same pattern seen in many other counters in the city. But then the high bridge closed, and bike trips in April were even a bit higher than Aprils without a pandemic. You can see the daily bike trips increase after the bridge closed: 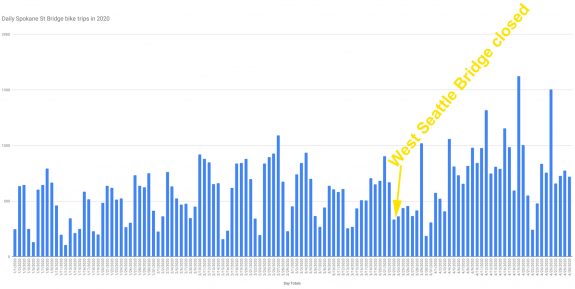 Of course, the numbers are likely going to dip this weekend thanks to the planned evening and night closures for maintenance.

Looking for advice on biking in West Seattle? Check out the community group West Seattle Bike Connections. They are very helpful and friendly. We also made a video walking through some common bike routes in the neighborhood complete with satellite flyovers so you can an idea of what to expect.

Our revamped data-tracking system will make it easier to track the monthly changes in bike counts data, so stay tuned for when the May data comes in.

Here are the monthly counts since the counter has been active: 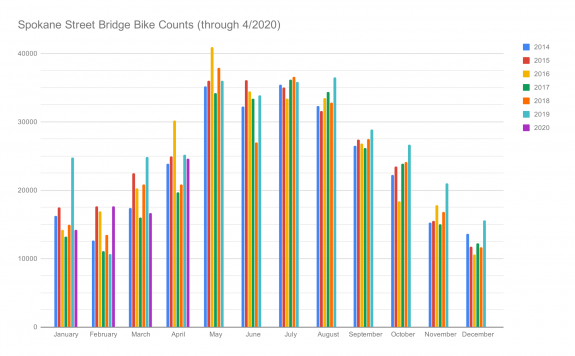 2 Responses to With the upper West Seattle Bridge closed, bike trips across the low bridge are higher than non-outbreak years