A statistical analysis of biking on the Fremont Bridge, Part 1: Overview

EDITOR’S NOTE: This is the first in a four-part series of posts this week by statistician Mike Logsdon. Mike bikes across the Fremont Bridge every day, and put together this analysis of the bike counter data “mostly for the amusement of friends and coworkers.” I hope you enjoy it as much as I do.

The city of Seattle has made the hourly bicycle crossing data public, and uploaded it to Seattle’s data webpage. I accessed the Fremont bridge bicycle counter data on May 20, 2014. Note that this data can also be visualized at SDOT through a Tableau interface, if you wish to poke around in it yourself.

This document discusses the Fremont Bridge bicycle crossing data. First, we present the data, then investigate the following: 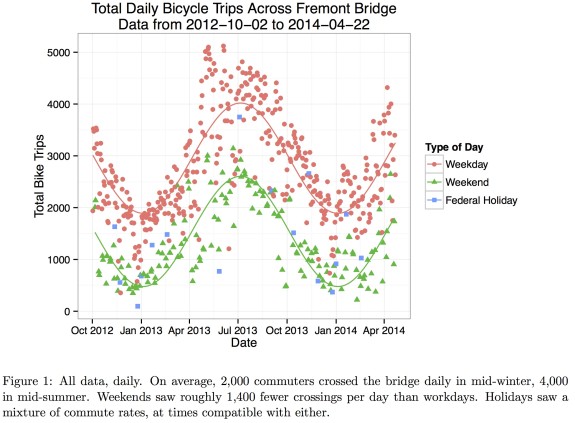 Figure 1 shows the daily total bicycle trips across the Fremont Bridge. Weekday bicycle trips averaged roughly 2,000 per day in the winter, and 4,000 per day in the summer, with daily variation of about 1,000 riders on each side of the average. Weekend trips were on average about 1,400 fewer than weekday trips. Federal holidays saw crossing rates similar to weekends. If you bicycled across the Fremont Bridge on a sunny, July weekday, it probably looked like this. If you did the same on a rainy, January weekend, you probably enjoyed a moment of peace and solace. 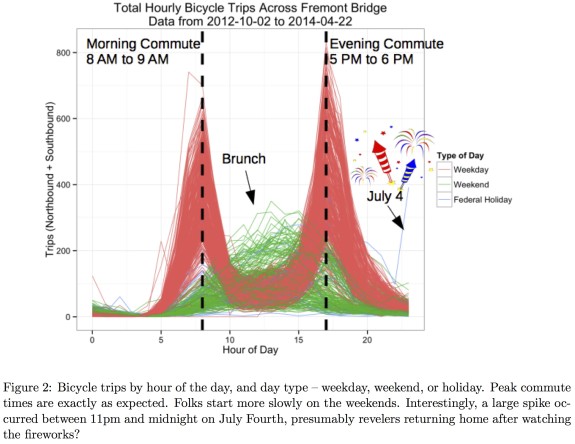 Figure 2 shows the entirety of the data, broken down hourly. This basic, exploratory view of the data confirms what we know should be true. (This is always heartening when working with data, as the opposite is often true, and you waste time searching for an error in the source data, and error in the computer code, or an error in your conceptualization of the project.) Peak commute hours are 8am to 9am, and 5pm to 6pm. Those peak commute times saw anywhere between 200 and 800 riders per hour, depending on the time of year. The weekends saw fewer trips, clustered more towards midday. I removed data from a few days with suspicious looking spikes, which have been acknowledged as erroneous, but one spike remained – 11pm to midnight on July 4, 2013. It would appear as though several hundred people rode bicycles across the bridge after the fireworks display.

Next in the series, we will look at the effect of precipitation on ridership volumes.

11 Responses to A statistical analysis of biking on the Fremont Bridge, Part 1: Overview