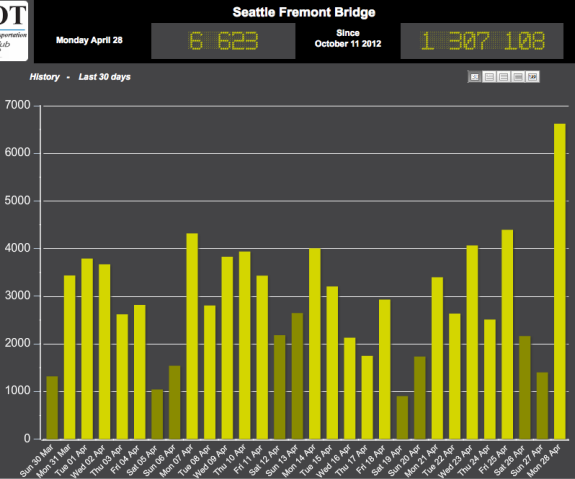 If Monday’s bike numbers hold up, this year’s bike boom in Seattle could surprise even the most optimistic bike advocates in town.

Seattle’s already steadily-growing bike numbers apparently spiked through the roof Monday, smashing a bike count record on the Fremont Bridge that was set June 4 last year, when an impressive people biked 5,121 trips on the bridge.

A whopping 6,623* bike trips were measured on the bridge Monday (*see UPDATE below). This not only dwarfs the previous record, but it’s also a huge increase over 2014’s second-bikiest day: 4,394 trips measured last Friday. That means a day in April this year has already surpassed last year’s Bike-to-Work Day and every day last summer.

In fact, the surge in numbers is so big that I’m hesitant to trust it until we have a few more data points for verification. I have also asked SDOT if they can verify the counter is working properly. Because if it is true, then Seattle might not be ready for the bike boom about to hit it.

On a typical work day in the early spring, somewhere between 2,500 and 3,500 people bike across the Fremont Bridge. This seems to represent the current base level for people who will bike year-round and through nearly any weather.

While the Fremont Bridge is just one data point in the city, it is a good high-use choke point to use a barometer of the city’s general bikey trends. So when looking at the data, the raw numbers say less than year-over-year growth.

History has shown that the numbers on the bridge spike as weather warms. Last year, the Fremont Bridge counter measured 50 percent more trips in May than in April. With two days left to measure, April 2014 has already seen 15 percent more trips than all of April 2013. If weather forecasts hold up, that could increase to 25 percent by Thursday.

Total bike trip counts are up nine percent compared to the same time in 2013, but that represents a slow-down compared to the 17-20 percent increase measured in late 2013.

But the “meager” nine percent increase could be skewed to the low end due to unusually heavy rains this winter and early spring. Analysis has shown that a morning rain will suppress a day’s bike counts. If any of you are into crunching data, you could analyze the number of rainy weekday mornings in 2014 compared to 2013 to test this theory. If you do, let us know what you find in the comments below.

Even if Monday’s number proves to be a fluke (for example, someone hung out on the bridge moving a wheel back and forth over the counter for an hour), the growth trend is steady and real. If Monday’s actual count was closer to the 4,000 counts seen many times in recent weeks, that would represent more than a 20 percent increase in April year-over-year. The city would be wise to plan for this level of growth in cycling, which means several thousand more people cycling regularly than did so last year.

UPDATE: The bike counter on the lower West Seattle Bridge did not see the same spike, though it did measure a number close to its own record set in early April.

UPDATE x2: SDOT also suspects that something is fishy with the 6,623 figure. From Traffic Engineer Dongho Chang: “We checked the daily count resolution and there is an unusually high spike in the morning hour.  We’re checking on the counter.  We suspect daily count is closer to 5,000.”

UPDATE x3: More details on the issue, from SDOT:

We had four one hour spikes, April 23, 25, 28, and 29. All during either the 8 or 9am hour and only on the east side of the bridge. These spikes amounted to 1000 to 2000+ extra counts. We have not been able to determine the exact cause, particularly since the counter operated fine all other hours.  We have validated the correct operation since Wednesday when we placed tubes counters on the bridge.

Today I replaced the battery and transducer for the east detector loops. It appeared to be working fine both before and after the work. We will continue to monitor the counts for another week to confirm correct operation and then turn on our count site again. We will adjust the data with errors based on typical volumes and the volumes of surrounding hours.

This entry was posted in news and tagged bike counter, fremont. Bookmark the permalink.