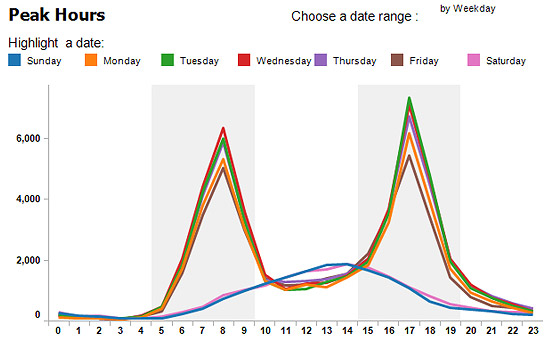 Images from the SDOT Blog

It’s a kick to watch the Fremont Bridge Bike Counter tick up one notch as you pedal past it on your way across the Ship Canal. But the counter is also a source of never-before-seen real-time bicycle travel data in Seattle.

A gift of Cascade Bicycle Club and the Mark & Susan Torrance Foundation, the counter was placed at the Fremont Bridge in October because it is likely the busiest bicycling crossing in the city. An electronic loop in the sidewalk (similar to technology that detects vehicles at stoplights) counts bicycles on both sides of the bridge, and the results are displayed on the northwest side of the bridge and recorded for study and display online.

The graph above, posted on the SDOT Blog, is likely not very surprising to most bicycle commuters. In fact, it looks very much like travel patterns you would expect for driving and taking the bus: Spikes during the morning and evening commutes. That’s because bicycling is a serious mode of transportation.

Perhaps more interesting is the somewhat wishy-washy effect of rain on bicycling volumes: 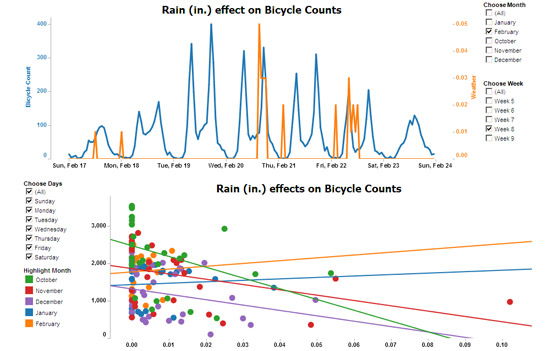 Most interestingly, it appears heavy rain in the morning can have a significant impact on the number of people biking, cutting volumes by a third or more compared to a dry day earlier in the same week.

However, once somebody is already out and about with their bike, they are very likely to continue biking even if it rains. Once the day is going, rain does little to affect cycling volumes.

In fact, you might expect rain volumes to have a very clear effect on bicycling numbers, but as you can see in the second graph, it’s not so straightforward. While weekend data might be messing with the results (for example, a dry weekend day would likely see lower traffic than a wet weekday, throwing off the graph), it’s still a bit surprising to see such a relatively weak connection between rain and bike traffic.

Notice anything else in the data (play around with the data at the bottom of this page)? Any other graphs your would like to see?

UPDATE: I made the following graph using the Tableau online graph embedded at the bottom of the SDOT counter webpage (you can also download the raw data here). By taking away weekends, this graph shows a much clearer view of the effect of rain on ridership numbers. Interestingly, the rain had little effect in January (perhaps, as X points out in the comments below, that’s because most people cycling then are hardcore enough to bike through anything). What do you think?

UPDATE x2: Interestingly, temperature plays less of a dramatic role (because December is all screwy due to the holidays, I would ignore those figures):

This entry was posted in news and tagged bike counter, fremont, sdot. Bookmark the permalink.