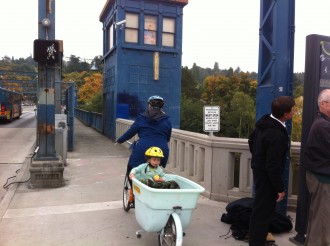 This first bike to be counted by the Fremont Bridge counter carried two people.

On average, 106 people biked across the Fremont Bridge every hour in 2013, and so far the trend keeps climbing year-over-year.

The bike counter was installed in mid-October 2012, so we only have two full months of year-on-year data to draw from. But so far, the results are promising:

The year’s bikiest day was June 4, which clocked 5,121 trips. June 4 also happens to be my birthday, so thanks for that awesome present, Seattle! If you are wondering what to get the bike blogger who has everything, try biking even more this year.

The Fremont Bridge counter is likely a good barometer for biking trends across the city because it is at a bike route pinch point next to a commercial area. There are several other bike counters going in now, so that data will help give an even better picture of bike usage in the city.

The raw numbers, while fun to track, say a bit less than the year-over-year bike use trends. We will be following closely to see if the trend holds up over time. If it does, we could be celebrating 1 million 2014 bike trips some time this fall…

SDOT now has collected a full calendar year of data from the Fremont Bridge bike counter, giving a better idea of the patterns of bicyclists in the corridor. The total number of bicycle trips counted for 2013 was 926,025, getting very close to 1M.

The day when the most trips were counted was June 4, with 5,121 trips.

What day were the fewest trips counted? It was not the day when we had a couple of inches of snow, Friday, December 20. There were 739 trips on that day. Instead it was Christmas Day, Wednesday, December 25, with 371 trips, and that is up from December 25, 2012 when only 98 trips were counted.

The day of the week with the most trips was Tuesday.

To see the data in graph form, go to:  http://www.seattle.gov/transportation/bikecounter_fremont.htm

Founder and Editor of Seattle Bike Blog.
View all posts by Tom Fucoloro →
This entry was posted in news and tagged bike counter, fremont. Bookmark the permalink.