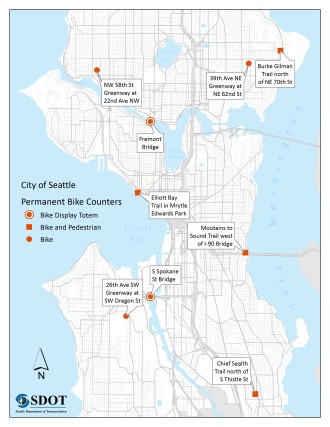 You no longer have to bike all the way to Fremont to get counted. The city — with support from the Rails to Trails Conservancy and the Mark and Susan Torrance Foundation — has installed seven new real-time bike counters around the city. This brings the city’s total to nine.

The new counters do not have a visual display like the ones already installed near the Fremont and Spokane St bridges, but the data collected will be the same and available online starting in February.

In addition to counting bikes, new counters on the Burke-Gilman, I-90, Chief Sealth and Elliott Bay Trails will count people walking, too.

Other counters installed in Ballard, Northeast Seattle and West Seattle will measure bike usage on neighborhood greenways, providing out first real data about how well they are being used and, importantly, how use grows as more people learn about them and they become better connected to the city’s bike network.

Seattle is working to make bike riding a comfortable part of daily life for people of all ages and abilities. Toward this end the Seattle Department of Transportation (SDOT) is constructing neighborhood greenways, protected bike lanes and multi-use trails; installing signs to guide people to their destinations; and putting in bike detectors at traffic signals. By creating comfortable places to ride bikes and connections to parks, schools and business districts, we hope more people will discover the practicality and joy of bicycling.

The next step is to monitor our progress. SDOT recently added seven new bike counters (four of which also count pedestrians) to neighborhood greenways and multi-use trails. The counters are helping us create a ridership baseline in 2014 that can be used to assess future years and help us reach our goal of quadrupling ridership by 2030. Unlike the two existing bike counters on the Fremont and West Seattle bridges, the bike counters do not have electronic display totems. But that doesn’t make them any less valuable.

“It is important to use our limited funds wisely and data driven decisions help us do this,” said Kristen Simpson, SDOT Plan Implementation Manager. “Collecting bike and pedestrian data helps guide our investments and measure our progress while building a transportation system that gives Seattleites great travel options.”

“While these bike counters may not offer the instant gratification of being visually counted like the Fremont and West Seattle counters, they are an important addition to SDOT’s measurements of Seattle’s progress toward getting more people to travel by bike. The more data we have, the better we’ll be able to plan for and build a safe bicycling network for people of all ages and abilities,” said Jeff Aken, Principal Planner at Cascade Bicycle Club.

Seattle is building a network of greenways to give people healthy travel options and help move us toward our safety goal of zero traffic fatalities and serious injuries by 2030. The counters consist of two small tube sensors stretching across the street, which are attached to a small metal counting box made by Eco-Counter. The tubes only count people riding bikes. They are very accurate and designed to be used on greenways.

Multi-use trails link neighborhoods to business districts and create connections with recreational and natural areas within the Puget Sound region. Also made by Eco-Counter, these sensors count both people riding bikes and pedestrians. Separate volumes are tallied for each travel mode. Wires in a diamond formation in the concrete detect bikes and an infrared sensor mounted on a wooden post detects pedestrians. The counters also capture the direction of travel for both bikes and pedestrians.

Data from the counters will be downloaded at the beginning of each month. It will be uploaded to Data.Seattle.gov and be available for public use starting in February. All counts are recorded in one hour intervals and will include a total overall count and, as available, a directional count.

SDOT plans to install at least three more counters this year. Additionally, numerous one week counts will be conducted at selected locations throughout the city each year. The data from the permanent counters will enable estimates of annual bicycle volume to be calculated at the one week count locations.

Special thanks go to the Rails to Trails Conservancy and the Mark and Susan Torrance Foundation for funding half of the cost. The data counters installed on our multi-use trails will be used in the Rails to Trials Conservancy’s Trail Modeling and Assess­ment Platform (T-MAP). This is a $1.2 million, three-year initiative to create the next generation of trail planning data collection instruments, methodologies and analysis tools.