Alert: The Spokane Street Bridge will be closed ‘at least two weeks’ 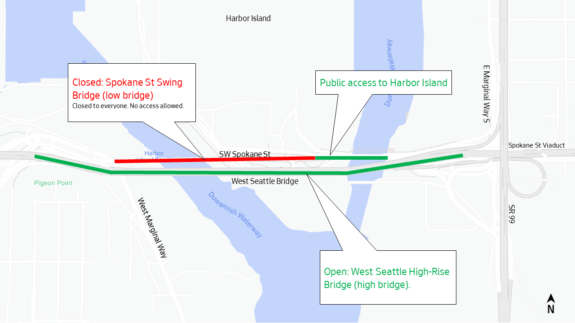 Note that the High Bridge is a freeway with no walking or biking access despite extensive recent investments.

SDOT posted an update Tuesday evening with terrible news for people who walk or bike between mainland Seattle and West Seattle: The Spokane Street Bridge, the lower swing bridge with the biking and walking path, will be out of commission for “at least two weeks,” according to the SDOT Blog.

The Alki Water Taxi was already scheduled to run seven days a week this winter, though it will be closed January 1–2 for the holiday. You can also put most bikes on a bus (except oversized and electric bikes), though there are only three bike spaces per bus.

Considering the major disruption this poses to people who rely on biking, it would be a huge help if SDOT and/or WSDOT fast-tracked an emergency bike route from Georgetown to downtown. E Marginal Way, 1st Ave, 4th Ave or Airport Way are all viable options. The 4th Avenue South bridge over the railyard already has a lane closed pending repairs. Perhaps they could just extend that to connect S River Street and S Lander Street?

The Spokane St Swing Bridge (Low Bridge) will remain closed for at least two weeks while our crews continue working to repair mechanical issues that intensified after a power outage during the ice storm on Friday, December 23.

Our engineers and crews are working as quickly as possible to develop a repair plan and schedule, and we will update the public as soon as more information is available. The bridge is currently open for maritime traffic and is closed to all vehicle, bicycle, and pedestrian travel.

Federal law gives the U.S. Coast Guard authority over maritime travel on the Duwamish Waterway and requires us to keep the waterway accessible for ships. The east channel’s bridge remains open, connecting Harbor Island and Terminal 18 to Sodo and the Spokane St Viaduct.

The problem initially appeared to be associated with a computer issue that occurred while the bridge was powering back up after a power outage. Once the computer issue was resolved, engineers found previously identified minor issues with the hydraulic system that moves the bridge had intensified.

We complete regular inspections of the Low Bridge and had existing plans to repair these aging components in 2023. However, after the power outage, it was discovered that previously manageable small-scale issues had escalated into more severe problems. Until these components are fixed, the bridge cannot be reliably moved without risking more severe long-term damage.

Our engineers are working as quickly as possible to analyze repair options. While there is not yet an estimate for how long bridge repair will take, we expect the closure to last for at least two weeks.

We are working to minimize effects on the traveling public to the extent possible and communicating with its regional partners, including King County Metro, the freight community, and the Port of Seattle.

Based on the evaluation results, additional Low Bridge closures for repairs may be needed in 2023, along with closures associated with planned capital improvements to the bridge next year.

We have been proactively working to maintain the Low Bridge as part of ongoing bridge preservation efforts. In addition to the immediate work to resolve this hydraulic system issue, we have several planned and recently completed improvements to the Low Bridge, including:

Please stay tuned for updates via @SDOTTraffic on Twitter, the SDOT Blog, or sign up for email updates.

9 Responses to Alert: The Spokane Street Bridge will be closed ‘at least two weeks’