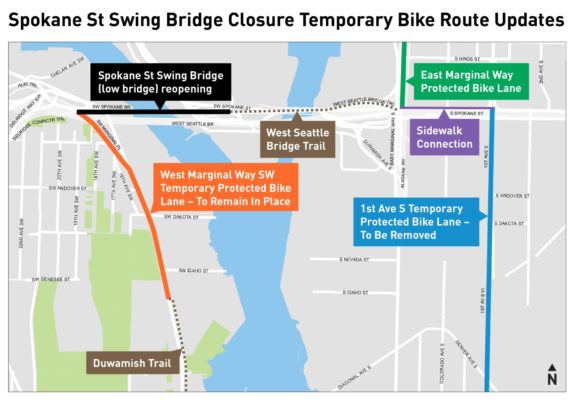 After three weeks stuck in its waterway-priority position, the Spokane Street Swing Bridge to West Seattle will be usable again this afternoon. SDOT noted in an announcement that it should be fully open by 2 p.m. today (Friday).

This is fantastic news for people who have faced a very long detour via the 1st Avenue Bridge several miles south in Georgetown ever since the swing bridge broke during the winter storm in the days before Christmas.

Sadly, this also means the end of the 1st Ave S emergency bike lanes, which made biking between Georgetown and Spokane Street safe and comfortable for the first time in modern memory. I hope the city gathered useful data from the experiment regarding its impact (or lack thereof) on traffic, vehicle speeds and bike volumes. Seattle Bike Blog has argued for bike lanes on 1st Ave S since the development of the Bicycle Master Plan in 2012–14, and having the opportunity to experience them only solidifies their potential. SDOT staff and Mayor Bruce Harrell deserve a lot of credit for building something quite extraordinary in just a few days. A lot of people worked hard, including during the holidays, to make that happen.

You still have one final evening to go ride the lanes yourself before crews remove them Saturday. They make Georgetown and other 1st Ave businesses feel so much more accessible and connected.

The city will not be removing the Duwamish Trail connection along the west side of West Marginal Way SW, which connected the Alki Trail near the Spokane Street Bridge to the Duwamish Longhouse and the Duwamish Trail. This trail connection has been in the works for years and has already gone through a lot of public outreach. It was nearly implemented in the weeks after the upper West Seattle Bridge closure, but the Jenny Durkan administration chose to delay it. So while this Spokane Street Bridge closure has been rough, a connected Duwamish Trail is an excellent parting gift.

Following successful repairs and testing of the Spokane St Swing Bridge (low bridge), the bridge reopens this afternoon, Friday, Jan. 13. Crews have already begun removing fencing and traffic control equipment around the bridge, and expect to finish removing signs and barricades by 2 PM.

Through extensive collaboration and long hours, we made major progress over the past 21 days to bring the low bridge back into operation. This effort included building a cradle to successfully remove a damaged 15,000-pound cylinder, repairing underground conduit, and replacing valves and hoses on the eastern bridge span’s hydraulic power unit (HPU). We also completed reprograming and testing of the bridge’s movable spans using one less cylinder, to ensure safe and effective operations.

While we expect the reopened bridge to operate safely and effectively, if issues arise with the newly installed equipment, we are even better prepared. And don’t forget, we have more work planned this year as part of the Spokane St Swing Bridge Rehabilitation Program. We’ll continue to share updates about upcoming work and closures.

With the low bridge reopening today to people biking, walking, rolling, and driving, we will remove the temporary bike detour route on 1st Ave S, as planned. This will take place on Saturday, Jan. 14. With more than 1,700 traffic cones and hundreds of signs involved, completing this all-day work on a Saturday is safer both for our crews and the traveling public, and avoids conflicting with weekday peak traffic.

However, we will keep the temporary protected bike lane along West Marginal Way SW in its current configuration, including the large orange barrels currently marking the route, and continue conversations with nearby businesses and community members about a protected bike lane in this location.