I’m pecking this post out on my phone from beneath the West Seattle Bridge after biking SDOT’s temporary, emergency bike lanes on 1st Ave S and on W Marginal Way, and I’m just beaming. It’s so good. Everyone involved should be commended.

Like, I just biked through Georgetown to the start of the Alki Trail, and it felt comfortable, easy and fun. It’s such a powerful experience to have a part of the city you’ve lived in for so long suddenly become available to you. There are so many businesses along 1st Ave I have never even seen before. And Georgetown has never felt closer and more connected to the center of the city.

It’s wild to witness a sea of orange traffic cones on 1st Ave, but they are absolutely working. Crews were still out making adjustments Thursday, but it felt fully operational. And traffic was moving just fine. I didn’t notice any backups at all midday when industrial businesses rely on lots of truck movements. Aside from the glaring orange everywhere, it felt right.

I’ll update this post with more photos and a walkthrough later today, so stay tuned. But for now, I suggest heading down to SoDo to go for a bike ride, a sentence I’ve never written before.

UPDATE: Below is the updated detour map and some more photos and a walkthrough of some of the detour elements. 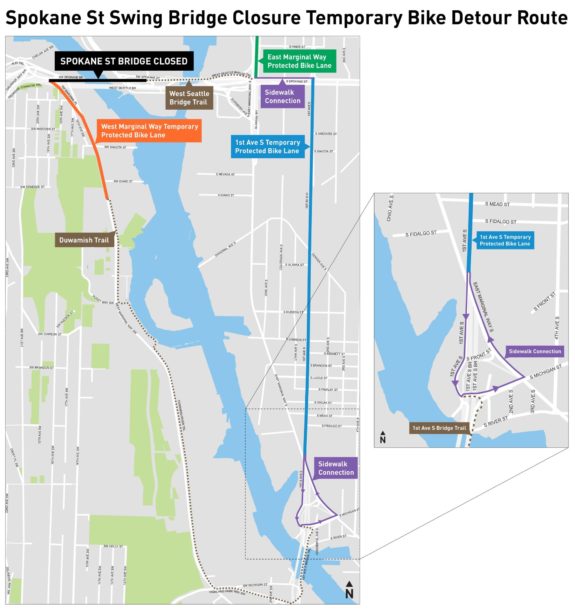 Heading to Georgetown from Spokane Street, 1,700 traffic cones line both sides of the street. The cones are aligned in such a way that there is also a significant buffer area between the general traffic lanes and the bike lane. During midday on a Thursday, I did not observe any traffic backups, which makes sense considering this stretch of 1st Ave S carries fewer than 18,000 vehicles per day according to SDOT’s count from 2019. A street with a lane in each direction plus a center turn lane can comfortably carry that many vehicles, and it can do so more safely as well. W Nickerson Street is a great example of an industrial street with such a design, and it carries a few hundred more vehicles per day than this part of 1st Ave S. After the city redesigned Nickerson in 2010, the number of people driving more than 10 mph over the speed limit dropped by more than 90%. 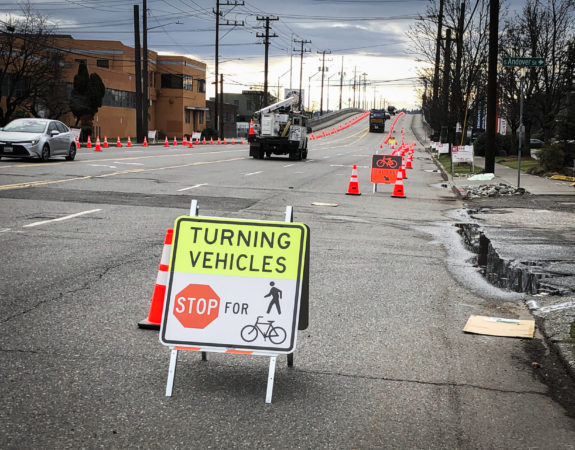 The trickiest part of the whole detour route is getting from the end of 1st Ave S to the 1st Ave S Bridge, which has two not-so-great options. 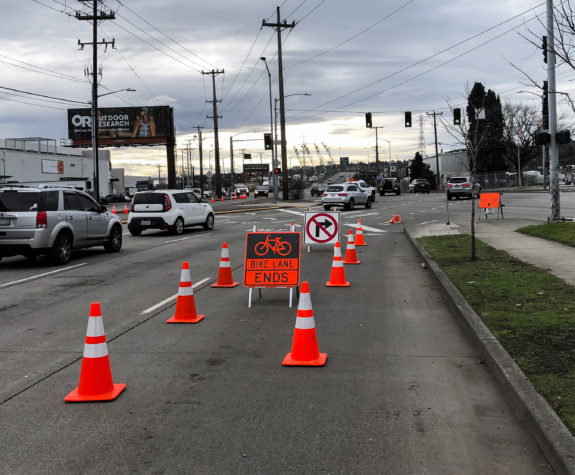 One option is to use the crosswalk and then bike for a couple blocks on a skinny sidewalk along the east side of E Marginal Way. requires merging onto E Marginal Way (SR-99) for about half a block. 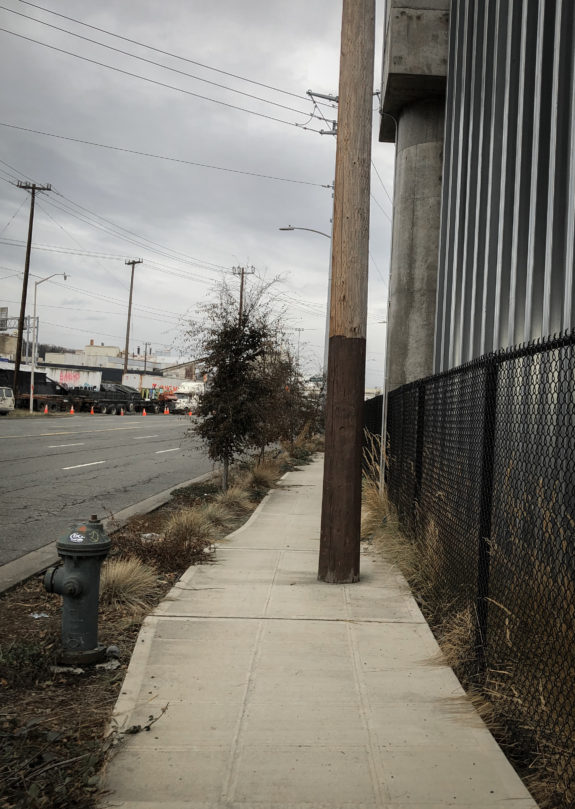 The other option is to bike through the intersection with the green light and turn left onto E Marginal Way, which is not particularly comfortable. But it’s a short distance, and thanks to the bike lane there should not be any vehicles behind you. Go the block using the rightmost lane, then follow the green bike route sign pointing to a side street. From there, finding the start of the trail to cross the 1st Ave Bridge is always kind of weird. It’s sort of hidden in a largely deserted area under the highway. Keep your eyes peeled for signs and little yellow markings on the pavement and you’ll get there. 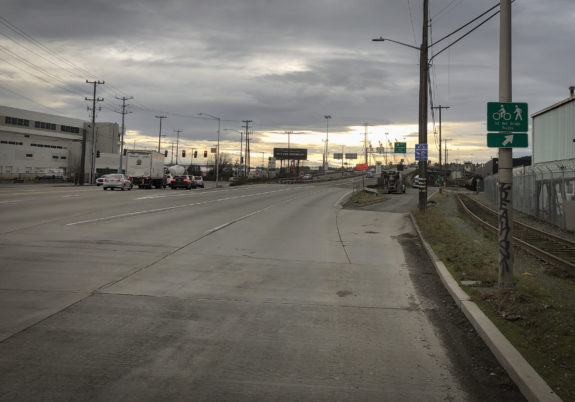 SDOT also created a temporary Duwamish Trail connection from the Alki Trail near the closed Spokane Street Bridge all the way to the Duwamish Longhouse and Cultural Center. From there, you can cross to the trail and follow signs for the 1st Ave Bridge. 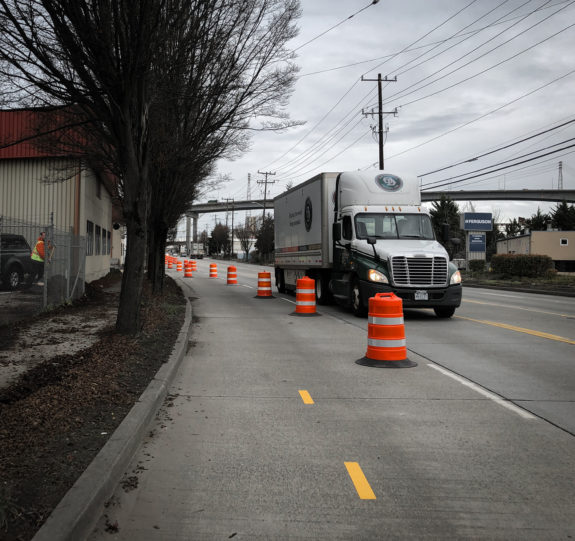 In a previous post, I was worried about the plan to use a sidewalk connection between 1st Ave and the E Marginal Way bike lanes, but it actually works very well. My only real note for crews is that I ran into a couple people at the detour sign posted at E Marginal Way, and they didn’t realize that there were temporary bike lanes on 1st. They seemed to disregard the detour sign, perhaps because they know 1st Ave S is not typically a good bike route option. So maybe there should be some info or big letters reading: TEMPORARY BIKE LANES so people know they are there. 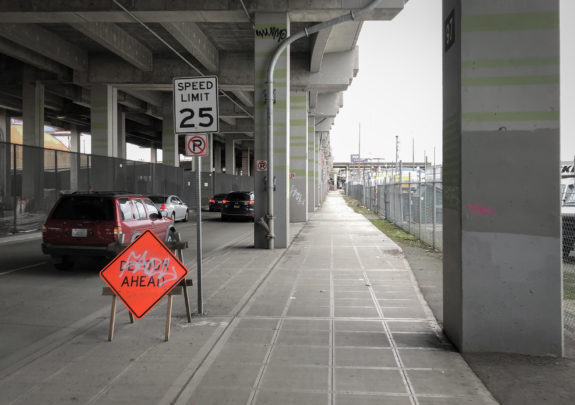 This was not an easy project to pull off. A lot of people at SDOT worked hard, including during the holidays, to make this happen. I tried to yell thank you to all the workers I passed.

Founder and Editor of Seattle Bike Blog.
View all posts by Tom Fucoloro →
This entry was posted in news and tagged 1st ave s, sodo, west seattle. Bookmark the permalink.