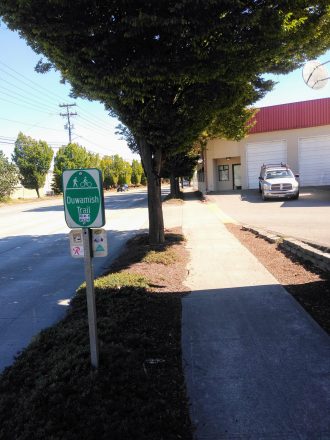 The northern segment of the Duwamish trail, a sidewalk.

The Duwamish trail provides one of the only dedicated bike routes to and from the South Park neighborhood, which is currently dealing with an influx of drivers looking for any shortcut they can take to avoid the repercussions of the West Seattle bridge closure. But for nearly half a mile on its northern end, the Duwamish trail is nothing more than a narrow sidewalk through an industrial area. With the South Park to Georgetown trail moving forward, this segment deserves more attention than ever.

For years, the Duwamish tribe has been trying to improve safety in front of their Longhouse on West Marginal Way SW along the river that bears the name of the tribe. It took the West Seattle bridge crisis, which diverted thousands of vehicles per day onto Marginal Way that would have otherwise used the bridge, to provide impetus (and funding) to install a crosswalk and traffic signal directly at the Longhouse. “This year, we leveraged the fact that we have this crisis with the bridge closure to get the city to fully fund the project,” Councilmember Lisa Herbold recently told Real Change. Mitigation funds for the bridge will pay for a new pedestrian crossing directly in front of the Longhouse as well as install a missing sidewalk on the west side of Marginal Way north of the building. 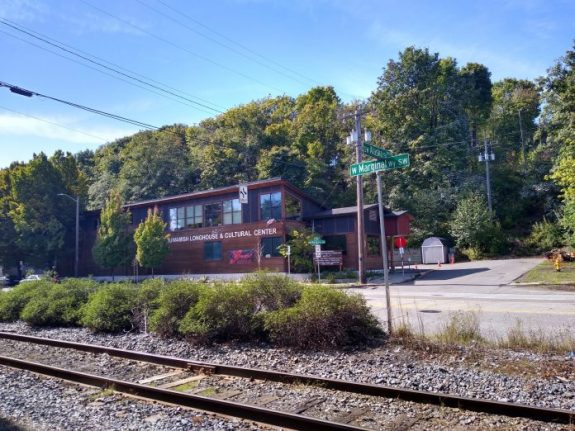 Current “crossing” in front of the Duwamish longhouse.

In 2019, lacking funding for a pedestrian crossing, SDOT took southbound Marginal Way down from one lanes to two for a short stretch in front of the Longhouse. Now SDOT proposes to extend that southbound lane closure up to the northern end of the Duwamish trail, converting the curbside lane into a two-way protected bike lane. 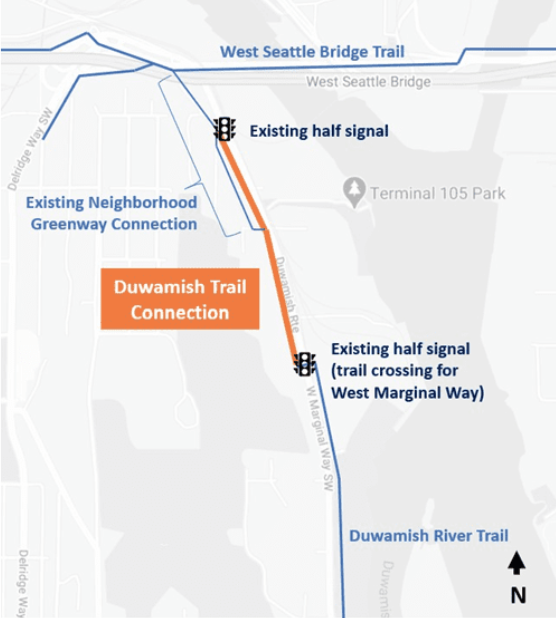 The proposed Duwamish trail connection would bridge a gap between the separated trail and the West Seattle bridge.

This improvement is obviously not a complete replacement for an off-street trail, but would be an improvement, especially for people biking southbound in the direction of traffic. But the biggest benefit of this change would be the impact on the speed of drivers on this segment of Marginal. SDOT recently brought the speed limit on the street down from 40 mph to 30 mph. But consistent design changes would do more to lower speeds, and since drivers are already merging into one lane at the Longhouse, it makes sense to extend that change all the way north.

Proposed cross section of Marginal with space made for a protected bike lane.

But the protected bike lane idea is meeting opposition from those who do not want to see auto capacity on Marginal Way reduced any further. Port Commissioner Peter Steinbrueck has been an outspoken critic of taking away space for vehicles on Marginal at West Seattle Bridge Community Taskforce meetings. In November of last year, the freight advisory board sent a letter to Deputy Mayor Shefali Ranganathan asking the city for West Marginal Way to be “restored as a five-lane facility”. The letter mischaracterizes the final connection of the Duwamish trail as “redundant” because users currently can use the sidewalk. “We are in deeply opposed to removing traffic lanes to add a protected bike lane on WMW”, the letter states. “We believe the proposed signal and sidewalk improvement near the Longhouse will improve safety so that the southbound traffic lane can be restored as a through traffic lane on this Major Truck Route.”

I spoke with Aley Thompson, who serves on the South Park Neighborhood Association and also serves on the West Seattle Bridge Community Taskforce. She told me that it was not her understanding that a removal of the lane reduction in front of the Longhouse was on the table, and cited the need to slow vehicle traffic down on Marginal as the most pressing issue.

SDOT spokesperson Ethan Bergerson characterized the issue as a debate over whether to install the protected bike lane this year or wait until the West Seattle bridge is repaired. “SDOT is committed to making this connection,” he told me. “Maintaining a single lane of traffic throughout the corridor would likely reduce the ‘hurry up and wait’ effect of congestion caused cars merging back into a single lane, and result in more consistent speeds throughout the corridor, closer to the current 30 mph speed limit,” Bergerson said, citing the lane reduction at the Longhouse as the “bottleneck” that is having a bigger impact on travel times than the bike lane would.

Asked if the lane reduction in front of the Duwamish tribe’s facility was on the table for removal, he told me, “There has not been a final decision on this. We are planning to conduct stakeholder engagement in early 2021 to get feedback once we have a design proposal ready to share.”

The new signal at the Longhouse is set to be installed this Summer. A pedestrian crossing will likely only be a bandaid if speed treatments aren’t effective, and adding the lane back to the street will likely increase driver speeds. It’s clear that any bike facility’s larger purpose would be to serve the larger goal of making West Marginal Way a safer street for everyone to use.