A group of community leaders and residents of the Georgetown neighborhood have sent a letter this week to SDOT Director Sam Zimbabwe asking the department to “re-engage” on the issue of creating a dedicated bicycle connection between the neighborhood and the rest of the city via downtown Seattle. The letter cites systemic issues facing Georgetown that are not specifically related to the closure of the West Seattle bridge in March of last year, which has led to an increase of traffic diversion through the neighborhood and an increased focus on the transportation needs of the Duwamish valley. From the letter:

Access to services outside our neighborhood remains a challenge. We do not have direct access to Rapid Ride, and our regular bus service is limited in destinations and times for essential services. Georgetown is not within a walk-shed of a light rail stop and we do not have shuttle service to the nearest station. Bike connectivity is dangerous for anyone who is not a seasoned rider outfitted with the experience and equipment to share routes with cars and freight in substandard conditions, which does not accommodate all abilities. While the bike link between Georgetown and South Park has been a very important and necessary project for which the community has advocated for years, we would like to re-engage on the crucial bike connectivity for Georgetown with the rest of the city, as funding for transit remains a challenge.

A feasibility study on a Georgetown to Downtown all-ages bike route was one of the projects that SDOT “paused” in 2020 due to budget impacts caused by the COVID-19 crisis. Funding allocated to plan for an extension to the existing multiuse trail in SoDo was also paused at the same time. Last fall, the city council restored funding for planning for the Georgetown to Downtown connection as part of the 2021 budget.

The planned trail between Georgetown and South Park is moving forward more quickly, with the city council also allocating construction funding for this project in the 2021 budget. SDOT is continuing design work on the trail so we should have more details on this in the coming months. Completing this trail will connect Georgetown to West Seattle and downtown via the Duwamish trail via South Park- if the final gap on Marginal is completed- but this route adds much more time than a direct connection via SoDo would.

Jon Persak, one of the signatories on the letter and a member of the West Seattle Bridge Community Taskforce, spoke on the subject of SDOT’s design to finally connect the Duwamish trail on West Marginal at a taskforce meeting last week, saying that he feels the conflict over road space on Marginal Way will “suck the air out of the room for other neighborhoods who are trying to get their needs met in terms of bike connectivity to the rest of Seattle”. Peaches Thomas of Duwamish Valley Safe Streets, another signatory, has joined West Seattle Bike Connections in supporting the trail connection.

The primary connections between Georgetown and Downtown as envisioned on the Bicycle Master Plan are Airport Way and East Marginal Way S. 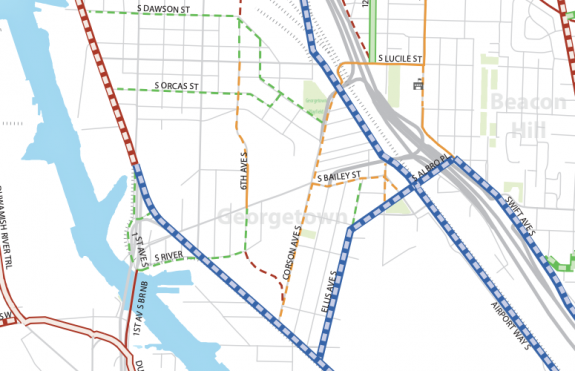 Georgetown’s connections and envisioned in the Bicycle Master Plan.

Completing the Georgetown to South Park trail as currently planned will create a safe place to bike along East Marginal Way, but extending this connection further north as envisioned in the Bicycle Master Plan will be a heavier lift. SDOT is moving forward with improvements that will significantly improve East Marginal north of the West Seattle bridge but further south proposed improvements are minimal. “Removing a motor vehicle lane was not recommended”, per SDOT’s website, and making the basic sidewalk improvements that are recommended is not even funded at this point. 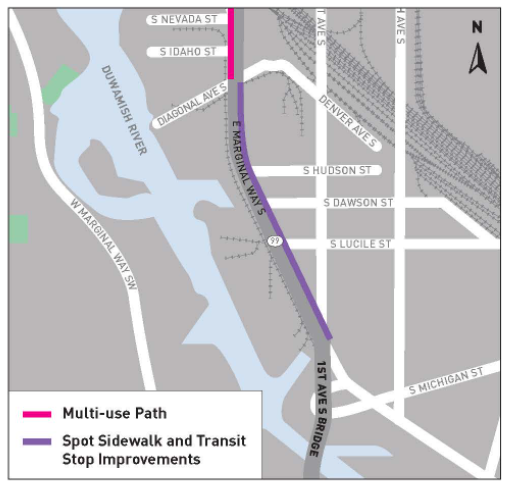 A protected bike lane on Airport Way has appeared on ambitious bike lane plans before, most recently in 2015, but the last time it was proposed, the project did not ultimately move forward due to a concern over the need for large numbers of vehicles needing to use Airport Way as an I-5 alternative in an emergency, so this too seems like a heavy lift.

The only other streets that fully connect Georgetown to SoDo are 1st Ave S and and 4th Ave S. Both of the existing bridges over the train tracks between those neighborhoods are coming under increased scrutiny due to seismic vulnerabilities that will cost a lot (!) of money to fix. Northbound traffic on the 4th Ave S bridge has already been reduced to one lane to reduce further deterioration.

As the letter notes, “…Georgetown is historically often passed over for critical needs”. Most of the construction funding for bike facilities through the end of the Move Seattle levy in 2024 is accounted for, but if planning work was prioritized for a Georgetown to Downtown bike lane, completing this very needed connection could become a reality. It is absolutely a connection that needs to happen as soon as possible.