The plan to finally connect the Duwamish Trail by installing a protected bike lane along the west side of West Marginal Way SW continues to face an uncertain future, as SDOT continues to conduct outreach before a final decision is expected later this Spring.

Last week’s city Freight Advisory Board meeting devoted a considerable amount of time to the topic, after that board had sent a letter to the City in November that asked West Marginal Way “be restored as a five-lane facility”. In order to make that happen, the protected bike lane would have to not be installed, and the 2019 safety improvement that directs traffic into one lane southbound outside the Duwamish Long House would also need to be removed. At the meeting, the SDOT presentation showed exactly why removing that improvement- even after SDOT installs the planned pedestrian crossing signal at the Long House- is a bad idea. The curve in West Marginal at that point creates significant impediments to seeing traffic (often traveling around 40 mph) coming. So far we’ve seen no indication that the City is prepared to listen to the Freight Advisory Board and remove the lane reduction at any point in the future.

During that meeting, we also got a look at the different options SDOT studied for extending the trail. The most discussed was Option A, which would have expanded the sidewalk that currently serves as the trail connection. This option would be much more expensive, not be as wide as a normal trail facility, require multiple trees to be removed, and also have sightline issues due to the driveways along the corridor. Option D, in the planter strip next to the railroad tracks on the east side of the street, also would be very expensive and require a new traffic signal to allow people to get back to the west side of the street. That’s true for option C as well, though that would utilize the entire easternmost lane, creating the same issues the freight board is concerned about. Option B, the one SDOT is still proposing, is the best option. 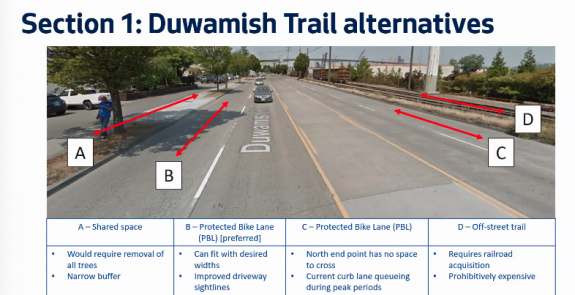 SDOT told the freight advisory board that the Duwamish Trail connection is expected to increase southbound travel times during peak hours by…ten seconds. Yet the board didn’t seem entirely placated by the data provided, with Chair Jeanne Acutanza calling the project an example of “death by a thousand cuts”.

Last Friday, Duwamish Valley Safe Streets, West Seattle Bike Connections, and the West Duwamish Greenbelt Trails Group wrote a joint letter to SDOT Director Sam Zimbabwe expressing their support for the project as the department has designed it. In the letter, they push back on the arguments like those made by Freight Advisory Board members that removing a traffic lane for the protected bike lane would impact traffic on the corridor negatively. From the letter:

“A significant benefit of the protected bike lane will be to improve traffic safety for all road users by slowing down speeding southbound traffic on West Marginal Way SW. Crashes are frequent and severe. Median speeds were in the mid-40’s and did not come down after speed limits were lowered to 30. Now speed radar signs are up, resulting in only about a 5 mph reduction. There is no congestion problem southbound due to lane capacity. There is a speeding and reckless driving problem, causing crashes and making it treacherous to cross on foot. Traffic congestion only occurs at the south end at the Highland Park Way intersection, where the backup from the First Avenue South Bridge begins. Along most of West Marginal Way SW, frantic drivers are rushing to get into the traffic jam as fast as they can. To hurry up and wait. Making more of the north end consistently one lane will allow drivers who travel at or near the speed limit to control the speed of all traffic, without any effect on throughput across the bridges. The bridges are the choke points, not the street.“

At the West Seattle Bridge Community Taskforce meeting earlier this month, Jolene Haas representing the Duwamish Tribe spoke in favor of the trail connection, saying, “It dovetails into the traffic revisions [at the Long House]…I don’t think it’s going to be a concern, it shouldn’t be.”

SDOT is planning more outreach in February, including a mailer to West Seattle residents happening around now, as well as an online open house currently scheduled for the middle of next month. It’s a lot of engagement around a traffic lane that SDOT’s data shows is incredibly underutilized right now and providing little public benefit, but our eyes will be peeled for the next chance to speak up in favor of it.

SDOT expects to make a final decision on the Duwamish trail connection by April.