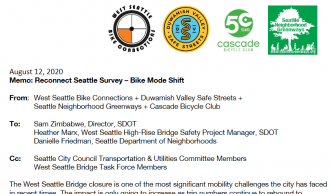 A collective letter from neighborhood and regional bike and safe streets advocacy groups calls on SDOT to invest at least 1% of the West Seattle Bridge replacement budget on improving bike connections.

The city’s mode shift plan for helping people get around during the bridge closure calls for a massive increase in biking (from about 1% to 10% for commute trips). But the current plan would only fund about 10 spot improvement projects for biking at less than $100,000 each. That’s a small amount of money compared to the estimated $160-225 million project budget. And it is simply not the level of investment needed to break down the biggest infrastructure barriers that prevent more people from cycling to, from and within West Seattle.

Increasing cycling tenfold is a very difficult task, but it’s not unreasonable or wildly unprecedented. As pointed out in the letter, cycling more than doubled during the 2019 Viaduct closure and shifted more trips away from driving than the water taxi despite essentially no city infrastructure changes to help more people bike. Instead, neighbors got organized and helped each other. And this was in January, so save your bad weather excuses. Imagine what would be possible if the city also invested to make the streets safer and connect the neighborhood’s bike routes.

The ramifications from the bridge closure have also extended to Duwamish Valley neighborhoods, including Georgetown and South Park. Increased traffic has made streets more dangerous and made many of the the already poor bike route options there, many of which only offer sharrows, even worse. So investments are also needed to mitigate harm and increase bike trips in neighborhoods that now serve as detour routes.

The alternative is to not improve and fully connect bike routes, then later bemoan the fact that biking didn’t rise to meet the mode share goal. Getting a dramatic shift requires dramatic action.

The West Seattle Bridge closure is one of the most significant mobility challenges the city has faced in recent times. The impact is only going to increase as trip numbers continue to rebound to pre-COVID levels. This is a challenge felt by residents and workers not just in West Seattle, but in the neighboring communities, including Southpark and Georgetown. Cut-through traffic has increased sharply in these neighborhoods in the last several months, bringing with it safety risks to residents walking and biking in these neighborhoods – which already suffer from lack of sidewalks and safe, dedicated bikeways. Another issue is increased pollution in communities that have already, for generations, borne the brunt of environmental impacts in Seattle. It is for these reasons that rapid investments to provide multi-modal transportation options are necessary. Our goal in providing the following feedback is to​​keep people and goods moving safely over the Duwamish River in ways that honor Seattle’s commitments to equitable transportation, our environment, social justice, and economic vitality. To those ends, we offer these comments regarding the Reconnect West Seattle survey, budget, priorities, and implementation.

We are happy to see that the city recognizes the role biking can play to mitigate impacts of the West Seattle high-rise bridge closure by creating an aggressive but realistic bike mode share goal for West Seattle as part of the Reconnect West Seattle project. To achieve the mode shift goal for biking, it will be necessary to make it safe, comfortable and efficient for many more people to bike.

The funding and scope of projects to improve biking is insufficient: fully fund the spot improvements list we provided in Spring (attached). ​While we appreciate the inclusion of many of our suggestions in the Reconnect Seattle survey we are disappointed to see that the city plans to implement only a handful of spot improvement projects, spending less than $1M [up to 10 projects at less than $100,000 each.] This is woefully inadequate to attract the numbers of new bikers you are planning for in a manner that will sustain interest in cycling to maintain the bike mode share over the medium or long term.

SDOT currently estimates spending between $160 million and $225 million for the first two years of the West Seattle Bridge Program. ​Budgeting one percent of this amount for bike route spot improvements in 2020-21 is a more realistic amount​ for the mitigation measures necessary to meet the mode shift goal for biking.

The proposed investment is not proportional to what is planned for bus and water taxi service, or to what has already been spent on measures for car and truck traffic detour routes such as traffic cameras, bridge deck reinforcement, and policing the Spokane Street bridge. For example, ​the target mode share increases for the West Seattle Water Taxi and for biking are equal, yet the proposal makes threefold investments in the water taxi​. The list of required investments we shared this Spring already represented a prioritized list; the bare bones essential investments needed to create a connected, protected network of bikeways through West Seattle, Georgetown and SODO. Instead of making those investments, SDOT is asking the community to further prioritize. Ten spot improvement projects are a start, but they will not do the job. Cities in North America that have had great success in encouraging a mode shift to bikes have all done so by implementing connected, protected networks of high comfort bikeways over short periods.

Additionally, paint and post improvements need to be complemented with programmatic support. Seattle’s Commute Trip Reduction program has, over the years, implemented innovative programming that has supported and encouraged mode shift. The city must rapidly develop a program that provides would-be bike commuters with the tools and resources they need to make the initial behavior change, institute it in routine, and stick with the shift over time and across seasons. The city must look at ways to support people from a range of backgrounds so that people of all ages, abilities, languages, ethnicities, genders and races can equally rely on biking as a safe,affordable and sustainable way of getting around during the bridge closure. Some examples could include:

Investment in biking is ripe for mode shift results; the 2018 Seattle Squeeze provides direct evidence. During the SR99 Viaduct/Tunnel transition in January 2019, West Seattleites proved that they would use bikes for commuting across the Spokane Street Bridge, even on dark, cold January evenings. With our active encouragement, West Seattleites added more than 1,000 bike trips per day across the bridge above typical January counts. Increased bike trips exceeded additional Water Taxi trips, despite the large expenses made for increased water taxi service. Unfortunately,the city made no effort to improve conditions for biking. Consequently, after the emergency, the numbers biking fell back to the usual winter numbers. ​Sustaining a shift to biking requires investment​.

Our April 28 proposals represent a constrained approach, to prioritize only those measures that are really needed for bike routes to the bridges, and that can be implemented quickly, economically,and without major disruptions.

The letter also includes a list of specific investments. Read more in this PDF.