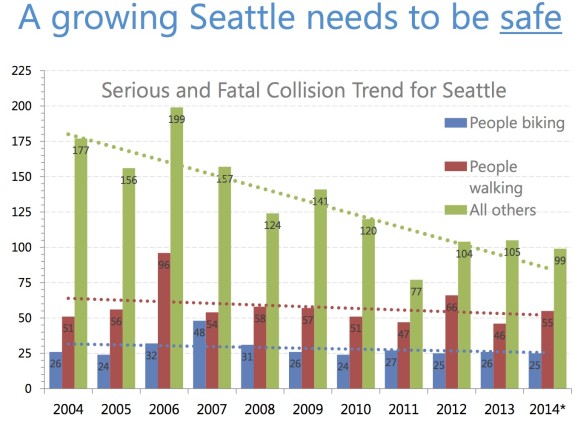 The past decade has seen steep increases in safety for people inside cars in Seattle, but the city’s safe streets efforts have barely moved the dial on reducing the total number of people biking or walking who are seriously injured or killed every year.

These safety improvements happened as motor vehicle traffic volumes have stalled, but transit, biking and walking increased significantly. So on a per trip basis, safety has improved for everyone in the past decade. But that’s not good enough.

If the city is going to reach Vision Zero, we need to continue the excellent work improving driving safety. Too often, debates over city road safety redesigns miss the fact that the biggest beneficiaries of these changes are people in cars. But we also need to take bold and innovative action to prevent serious collisions for people biking and walking. What we’ve done so far has been OK, but clearly hasn’t gone far enough.

We already reported on the claims that the Move Seattle levy would put Seattle on track to build half the Bicycle Master Plan on schedule (half of the 20 year plan in the first ten years), which would be the first time that’s ever happened. Some other examples of safe streets investments include: $23 million for Road Safety Corridor projects, $61 million for new sidewalks and $26 million for neighborhood priority projects.

Interestingly, the city plans to build 50 miles of protected bike lanes and 60 miles of neighborhood greenways spending only $85 million ($65 million from levy plus $20 million in expected grant leverage), far below the estimated costs in the Bicycle Master Plan. According to the Bike Plan, those miles would cost between $105 million and $152 million.

As Michael Andersen reported on this blog, however, the city has been moving towards lower cost protected bike lane designs since the Bike Master Plan was developed. We have seen the first example of such on 2nd Ave downtown. The question is: Can the city consistently deliver high-quality bike lanes at that lower price?

Gordon Padelford of Seattle Neighborhood Greenways also pressured the Council and Mayor’s office to significantly boost investment in Safe Routes to School, especially for schools serving populations that could most benefit from a safe and reliable way for kids to get to class (you can listen to his testimony at 3:50 in the video below). For example, let’s say the city wanted to complete one quality north-south and one east-west route through the walk zones of schools serving low-income students. In order to reach the ten schools with the highest rate of subsidized lunches, it would cost $21.4 million, according to cost estimates by SNG. To get to all the schools where a majority of students receive subsidized schools, the city would need to invest $38.4 million.

The City Council’s new special committee to develop the Move Seattle transportation levy heard a presentation from SDOT and city staff Tuesday that went into a few more details about Mayor Ed Murray’s proposal. The mayor will submit his final legislation to the City Council in the next week or two. The Council will then have the chance to make changes before submitting it to King County during the summer for placement on the November ballot.

If you have already read our previous coverage, there shouldn’t be too many surprises. But if you want to hear city officials explain the levy, check out this video:

Here’s a breakdown of the numbers: