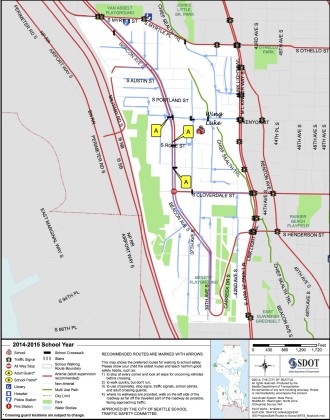 One example of a school walk zone. Every child who lives in the white walk zone area should have a truly safe route to school.

The Move Seattle transportation levy puts a pretty strong emphasis on safety, but there’s one key piece that many safe streets advocates in the city think is far too low: Safe Routes to School.

You can tell the City Council what you think of Move Seattle (see our previous coverage here, here and here) and support investments in Safe Routes to School at a public hearing 5:30 p.m. Tuesday in the Council Chambers at City Hall.

Anne Fote is a Seattle school nurse, and her school nurse association believes that investing in walking to school is vital not just to helping kids get their necessary daily exercise, but also to helping them learn. Walks to school can be learning experiences and opportunities to make friends. But most directly, it’s about their safety, as she told the City Council’s transportation levy committee:

A few Hamilton kids have been hit by drivers since I’ve been a nurse there. Two girls were hit by a Hamilton parent. It’s kind of a vicious circle. Parents wouldn’t be driving their kids to school if they felt the streets were safe for walking, and streets are less safe because so many parents are driving our 55,000 Seattle Public School children to school.

Safe Routes to School are also great because…

The ability for kids to walk or bike to school is especially vital for low-income working families who cannot afford a car or the time to take their kids to school. Low-income students are also more likely to live in areas with dangerous streets and (related) higher rates of childhoood obesity.

Experience biking to school also gives kids a chance to learn road safety skills, which is especially true when coupled with bike education during physical education classes and/or after school programs.

So what would it really take to, say, build true safe routes to every school in Seattle where half or more kids qualify for subsidized lunch (a common measure of income constraints)?

$40 million, says Cathy Tuttle of Seattle Neighborhood Greenways. That’s a bit higher than the $7 million suggested by the mayor’s office, but not beyond reach. She recently outlined the case for further investment in Safe Routes to School on the SNG website:

With the help of transportation experts, we’ve calculated about $40 million can fill some of the biggest gaps at 28 elementary schools where half or more of the kids qualify for free lunch.

SDOT already invests a lot in Safe Routes to School. 20mph speed cameras next to a few schools bring in more than $5 million a year that we’ll need to keep investing in a backlog of hazardous road conditions in the Walk Zones of all 97 Seattle Public Schools.

Where’s the $40 million going to come from?

Well, there is $930 million in the proposed Levy. Most large engineering projects – big repaving, bus corridors, bridge repairs –  need to leverage big state and federal money. We believe these mega-projects can leverage a little more.

Unfortunately the fine-grained careful investments that give this boy a safer walk home qualify for almost no outside matching monies. Small neighborhood-scale investments for our most vulnerable are what cities are expected to make, what transformative levies are intended address, and what compassionate voters approve. Unlike big paving and bridge projects, money for safety improvements for walking in our neighborhoods is never going to come from state or federal transportation packages (and if you believe it is, you haven’t been following the news lately).

It is truly up to us to decide to provide $40 million to Move Seattle for Our Kids.

The Move Seattle Levy is a once in a generation opportunity to change course and decide to invest in our most vulnerable and valuable. Let’s invest in our kids.

Please sign our petition to the Mayor & City Council if you believe we should Move Seattle for Our Kids.

If you want to listen to Fote and others say some smart stuff about Move Seattle, you can watch the Seattle Channel video below. The non-Alex Tsimerman testimony begins at the 9:30 mark:

If you keep watching that video, you can hear a presentation on equity in the Move Seattle levy. SDOT staff put together this interesting map showing how their planned investments match up with the “equity score” (a measure that combines low car ownership, resident age, disabilities and income). It’s promising, but shows need for some adjustments and focusing of safety dollars (you don’t want the red lines to be around areas with high equity score): 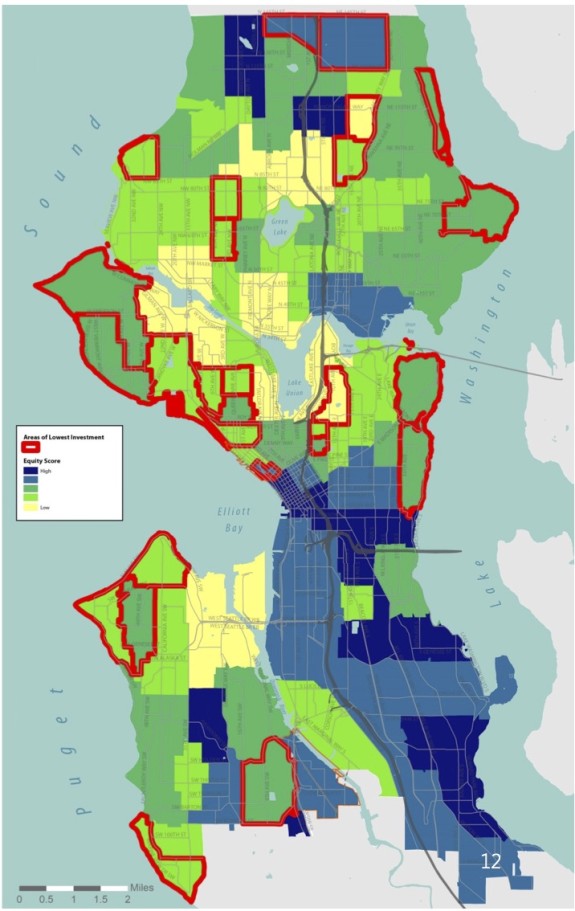