Posted on January 6, 2014 by Michael Andersen 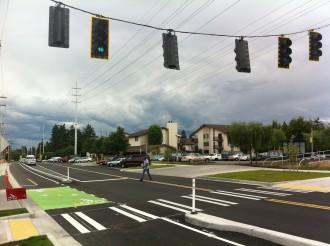 A crosswalk on the reworked Linden Ave

Which is better for bike lanes: concrete curbs or plastic posts?

In the small, fast-growing world of the protected bike lane, Seattle is the city of physical beauty.

I won’t lie to you: my organization, which helps U.S. cities build protected bike lanes, named Seattle’s rebuilt Linden Avenue as our No. 5 project of the year because I saw it in a video on the Internet and developed a crush on its little gray curbs.

New York uses parked cars. Chicago uses plastic posts. But with the neat, subtle concrete curbs and gutters of Linden and Broadway, Seattle has been bringing a European sense of permanence and durability to its protected bike lane projects.

Don’t get used to it. 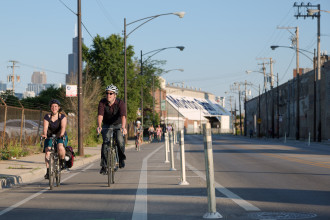 Photo of a bike lane in Chicago from People For Bikes

Like most of the other U.S. cities that are following in New York’s and Chicago’s footsteps, Seattle is about to embrace the plastic white bollard.

If it doesn’t, City Traffic Engineer Dongho Chang said in an interview, you can kiss your expectations for a fast-growing network of protected bikeways goodbye. (That, or dramatically increase your budget for new bike infrastructure. Your call.)

It’s not just because cast-in-place curbs are expensive compared to other bike infrastructure, though they are: about $250,000 per mile for the curb alone, according to the latest estimates from Austin bikeway engineer Nathan Wilkes, compared to $120,000 for posts and paint. (Other expenses, such as dedicated traffic signals at large crossings, add to the pricetag as well.) It’s also because of the Americans with Disabilities Act, which requires all street corners adjacent to road “reconstruction” projects to be fitted with wheelchair-and-cane-friendly curb ramps for $11,000 a pop.

If Seattle retrofits a street with an attractive Broadway or Linden-style curb, it triggers ADA upgrades. The cost to fix all those curb ramps: another $375,000 a mile or more, Chang says. The Broadway and Linden bike lanes were parts of larger street reconstruction projects, so the ADA work would have happened with or without the bike lanes. But for streets that are not otherwise being reconstructed, installing curbs with bike lanes could trigger the ADA improvements.

So Seattle will likely set out to avoid such costs if possible by avoiding bike lane designs that would also trigger sidewalk upgrades.

“My takeaway is that a lot of these protected bike facilities, if we can do it low-cost to start out with, tend to be easier to put in,” Chang said. “Buffered bike lanes with the flexible posts: very easy. They don’t require any drainage, and if you they have good pavement, then you don’t have to trigger the curb ramps.”

In other words, a high-visibilty zebra crosswalk that might usually cost about $250 costs $22,000 at a corner with bad curbs.

For bike lanes installed with plastic posts, Chang said the city would plan to replace the posts with curbs — and, presumably, upgrade the necessary ramps — at some point in the future.

Amsden said in an interview that though he has “a little bit of envy” for cities such as Austin and Seattle that have started with curbs, he’s more or less happy with Chicago’s decision to build most of its projects with bollards.

“There’s pros and cons to doing it both ways — quality versus quantity, honestly,” Amsden said. “The philosophy of just getting as much in as quickly as you can is great.”

Amsden said Chicago has found that each mile of bollards seems to require about $1,000 per year in maintenance. At that rate, it’d take more than 100 years for a concrete curb to pay for itself in maintenance savings alone.

On the other hand, Amsden said, curbs add value that flexible posts don’t.

“They create kind of a sense of place,” Amsden said. “Which goes a long way to selling these projects to people who may not care about bikes.”

Michael Andersen is the staff writer for the Green Lane Project, a PeopleForBikes effort to promote better bike lanes in cities across the U.S.

56 Responses to Andersen: Using plastic posts instead of curbs, Seattle plans to reduce the cost of protected bike lanes