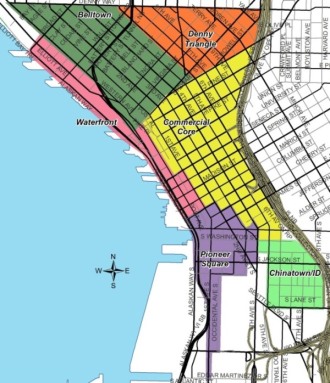 The study area. The percentage outside the city center is likely even lower

For all the media attention Seattle has received for installing bike lanes in recent years, you might think these things are popping up all over the place.

But spend a little time on a bike, and that image is immediately shattered. Seattle streets are very much still focused on driving cars, and biking here with regularity requires a whole lot of sharing general traffic lanes with cars, trucks and buses or biking in skinny bike lanes squeezed too close to parked cars.

For example, an in-process effort to better understand the use of Seattle’s curb space found that most space is used for driving or parking motor vehicles. Only 2 percent of curb space in the center city study area is dedicated to bike lanes.

You can help with the study by taking this survey on curb use and how you get around the center city. 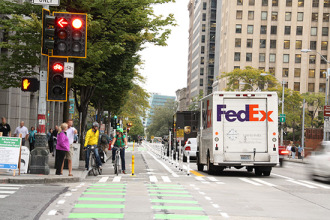 As this SDOT image shows, a complete street can meet all needs, from safety to deliveries to parking.

This study further quantifies how much work the city still has before getting around town on a bike is a truly safe and easy experience. The League of American Bicyclists recently declined to upgrade Seattle’s “gold” bike friendly rating to “platinum” in large part due to how few of the city’s arterial streets have bike lanes of any kind. The League found that only 17 percent of arterial streets here have bike lanes, far below the “platinum” city average of 78 percent. And many of those existing bike lanes are skinny parked-car-door-zone lanes in need of an upgrade.

Bike lanes aligned to the curb are typically the safest and most comfortable since they are not located within the door zone of parked cars. They are even more comfortable when there is a barrier separating the lanes from the general traffic lanes, even if that separation is just a line of plastic posts. If the center city area is going to be an inviting place to bike for people of all ages and abilities, we’re gonna need a whole lot more of these protected bike lanes along curbs.

Of course, bike lanes don’t kick out other important curb uses. As seen on 2nd Ave, the lane next to the bike lane can be designed to match each block’s individual needs. Sometimes it can be a turn lane, sometimes it can be a loading zone, and sometimes it can provide short term parking. This is how the center city streets will become complete streets, focused on the needs and safety of all users, not just on the movement (or lack of movement) of cars.