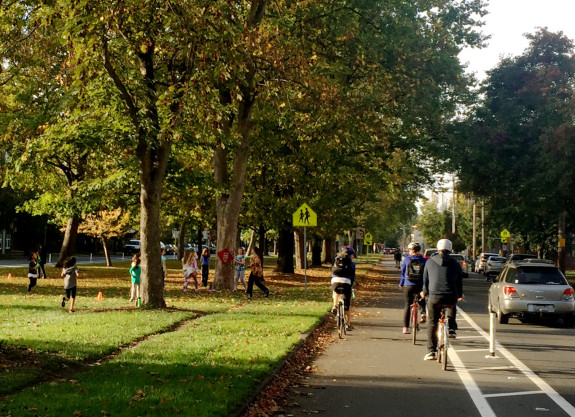 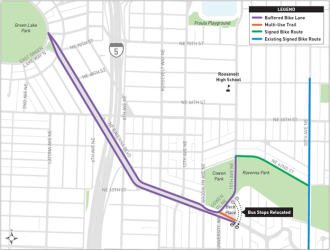 Seattle quietly opened 1.5 miles of new or upgraded protected bike lanes in Ravenna and the U District recently. The low-budget projects cut a couple corners, but still add huge value to bike safety and mobility in some of the city’s bikiest neighborhoods.

Let’s start with Ravenna (post about Campus Parkway bike lanes coming soon, stay tuned). I swear I did not stage the super happy photo above. What you can’t see is the middle school kid biking home solo in the protected bike lane on the other side of the Ravenna Boulevard median. This stuff really does work. Create a long, connected and truly safe bike route, and the city opens up to our youth and everyone else who doesn’t feel comfortable mixing with traffic.

The physical changes to Ravenna Boulevard itself aren’t all that significant. The bike lanes were already wide with quality painted buffer space. But just adding some plastic posts every few feet does a lot. They are not as good as a curb or planter boxes, but the posts are effective at keeping people driving from using the bike lane as a passing lane. And they cost way less to install, which is how all this work was done on a $200,000 budget (that might sound like a lot, but it’s very cheap in terms of transportation infrastructure).

Perhaps the single biggest improvement to Ravenna Boulevard itself is this new stop sign at the I-5 ramp: 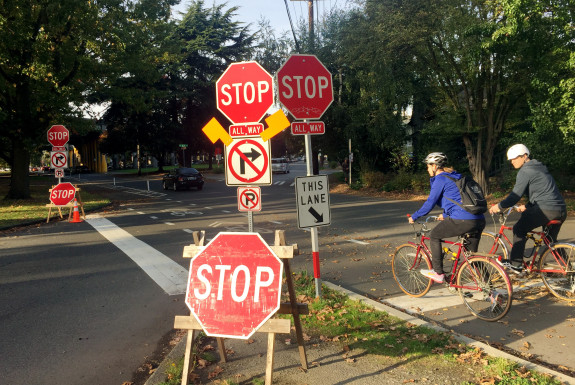 It’s kind of crazy this stop was not already there. It used to be very stressful to get across whether on a bike or in a car, especially during busy hours when there were few breaks in ramp traffic. This is the kind of change that makes a big difference for people who aren’t as quick or brave on their bikes. It’s not perfect yet (the lane is soo wide), but it’s a huge improvement.

Another great part of the project is the new and remarkably seamless connection to Ravenna Park’s awesome unpaved trails and to the neighborhood streets on the north side of the 15th Ave NE bridge. This project would not have happened without hard work by Andres Salomon (a Seattle Bike Blog contributor) and other neighbors involved with NE Seattle Greenways. In fact, you may recognize the idea from Park(ing) Day 2014. 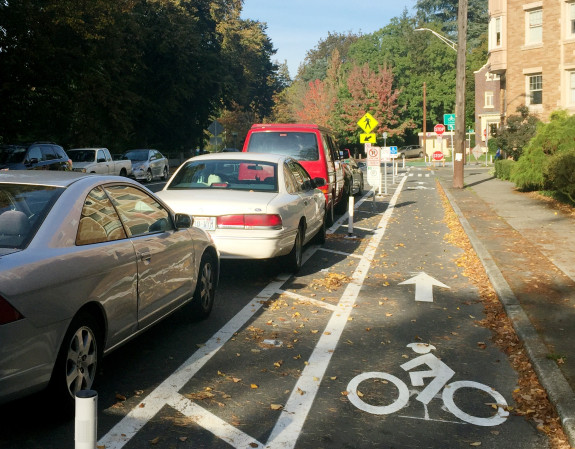 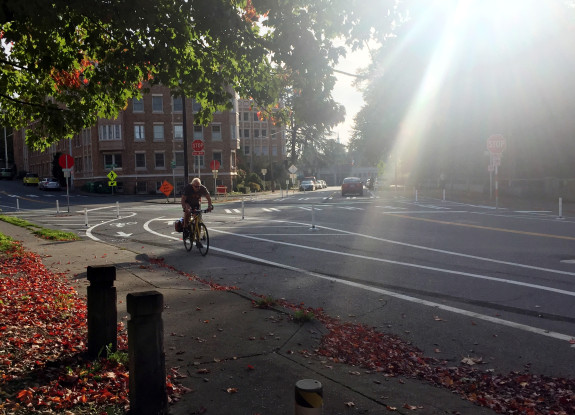 Looking toward Cowen Place NE across 15th Ave NE. This redesigned intersection feels much safer for walking and biking. 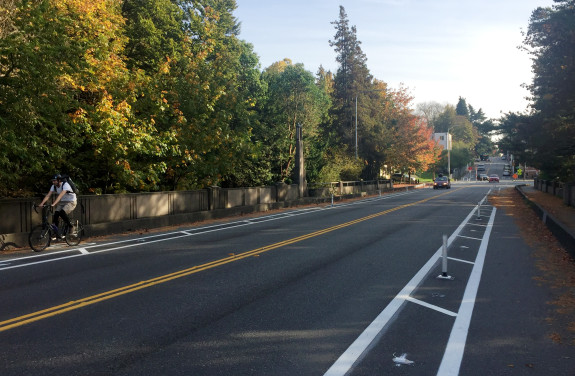 These new bike lanes then connect to a new neighborhood greenway on NE 62nd Street, a rare comparatively flat street that connects to the well-traveled 20th Ave NE bike route and bridge (among the coolest bridges in the whole city). 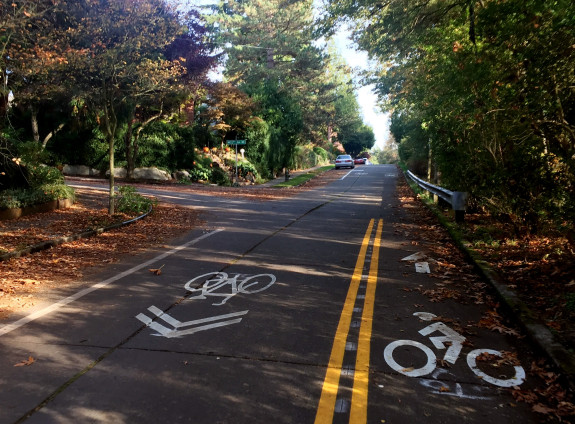 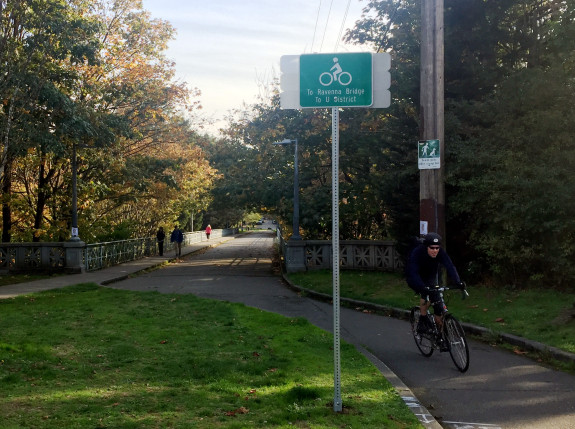 The 20th Ave NE bridge over Ravenna Park, one of the greatest walk/bike bridges in the city (country?)

The biggest missing piece in the route is a safe crossing at 15th Ave NE and NE 62nd Street. Today, it’s wide and traffic moves fast. 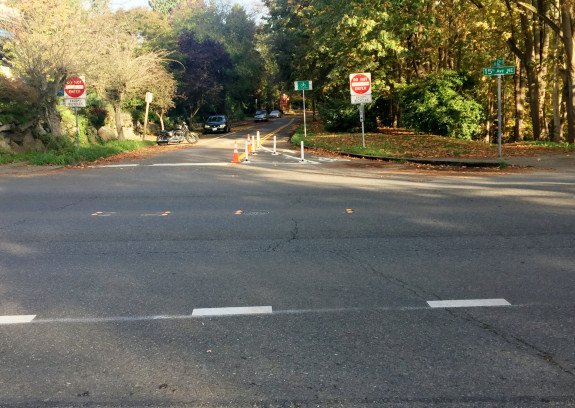 The crossing at 15th/62nd needs some love

Perhaps the ultimate solution here includes extending the protected bike lanes on 15th up to at least NE 65th Street, which is also slated for protected bike lanes in the Bicycle Master Plan. The intersection at 15th/65th desperately needs a safer design. Sadly, it took the tragic death of Andy Hulslander earlier this year to point out some of its dangers. It’s just too wide and has no safe space for people on bikes. Mix in some inattention or, in Andy’s case, an allegedly intoxicated person behind the wheel, and you have a recipe for disaster. If we don’t fix it, people will continue to get hurt. 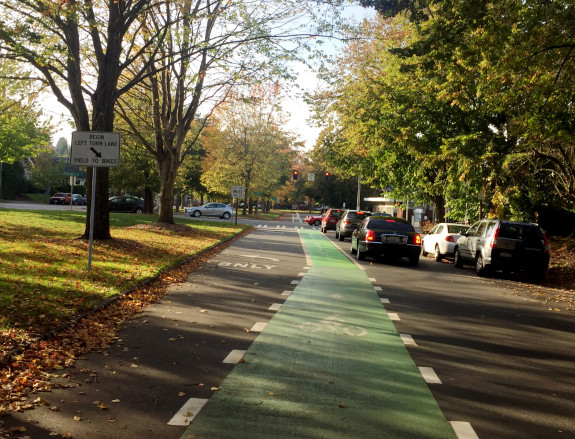 Unfortunately, the Ravenna Blvd bike lanes still are not completely finished. These criss-crossing turn lanes at major intersections are simply not comfortable enough to achieve the all-ages-and-abilities goal advocates and city plans strive for.

Sure, compared to challenges on other bike routes in the city these are no big deal. But Seattle can’t keep skipping the intersections when designing bike projects. These are the most stressful places in any bike trip, and they are the spots where people on bikes need protection the most. Having people in cars cross the bike lane in order to make a left turn simply isn’t good enough.

Protected intersections are not cheap and are still fairly experimental in the US. But this is the new frontier in bicycle safety, the solution to so much bike route stress. Seattle needs to start solving the intersection problem.

Did I mention that passing the Move Seattle levy would help? Get involved!