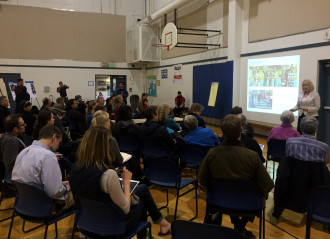 SDOT presented about the proposed changes at a Tuesday open house

The city is planning some pretty cool upgrades to the Ravenna Boulevard bike lanes and its connections through Ravenna Park. And they’re planning to do a lot with a small budget, like adding plastic posts to keep people from using the bike lanes as passing lanes.

But they are also cutting one of the most important corners: The need to upgrade major intersections.

The $200,000 budget (including outreach and design) is not enough to significantly improve the existing “slot lane” design at busy intersections like NE 65th Street and Roosevelt/11th Ave. This is where people making left turns drive across the bike lane, leaving anyone on a bike uncomfortably squeezed between two lanes. Well, unless the bike lane is blocked entirely, as happens often:

The best solution is to get rid of the lane crossing and install new separate bike and turn signal phases. But adding signals can be pricey, especially for a super low-budget project like this that can only really afford paint, signs and plastic posts.

The Ravenna bike lanes, which were redesigned during a major repaving project just three years ago, are already of high quality by Seattle’s standards. That’s why it’s so easy to just add the plastic posts and call them “protected bike lanes” at very little cost.

But the major intersections will remain missing links in an otherwise all-ages-and-abilities bike route. This is a great opportunity to go ahead and just do it right while we’re there. If the budget absolutely can’t be found before construction this summer, the city should at least commit to a timeline for fixing the intersections rather than letting them linger on the “maybe someday” list.

Here’s a look at the full project area: 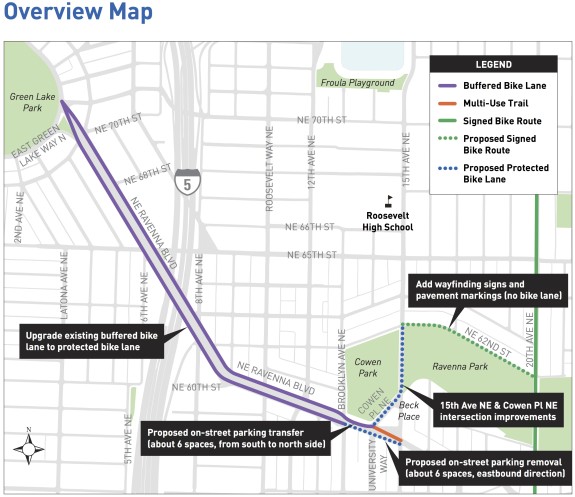 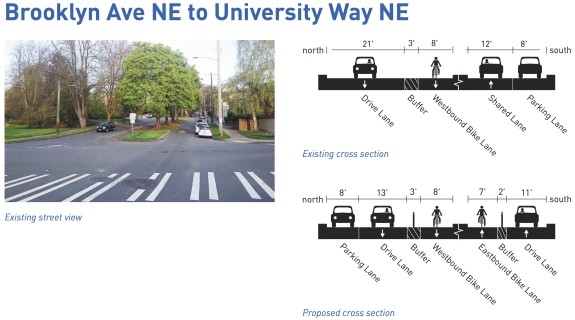 The project is planning smart changes east of Brooklyn Ave, like moving parking across the street for a key one-block section just west of the Ave to make space for a long-needed bike lane connection. 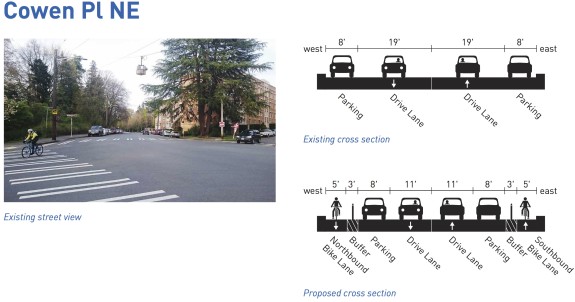 The city also liked a NE Seattle Greenways Park(ing) Day project so much that they want to make it permanent. How cool is that? Good work, Andres Salomon!

Basically, just by using the space on Cowen Pl (a small street connecting Ravenna Blvd to the 15th Ave NE bridge across the park) better, the city can make some pretty significant bike route and walking safety improvements. Here’s a video from that awesome Park(ing) Day demonstration:

This project would create a connection between Ravenna Blvd and NE 62nd Street, which would get a low-budget neighborhood greenway upgrade along the north side of the park. 62nd is currently one-way, but the changes would allow two-way bike travel. 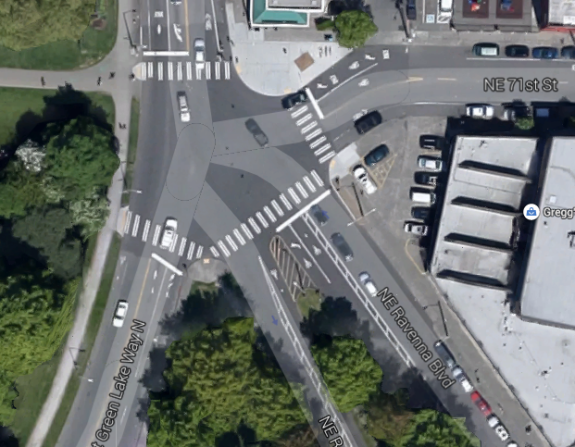 The final big piece of the project is to hopefully address the crazy intersection where Ravenna Boulevard, Green Lake Way and NE 71st come together. This area has a (surprisingly) low collision rate, but it’s not comfortable for people biking or walking. This is especially true for more vulnerable people and families with children.

The lack of comfort for all users is likely why so few collisions happen. Everyone is stressed out, moving slow and looking for each other. So the challenge to SDOT is to find a solution that is both safe AND comfortable, especially more vulnerable people or people with mobility issues. That’s no easy task.

Planners did not have a design to present at the recent community meeting, but changes would hopefully simplify the intersection and decrease crossing distances. The city expanded one of the curb bulbs a few years ago (you can see the “fresh” bright concrete in the map above), which make things a bit better. But there’s still more they can do to tighten things up. We are eager to see what they come up with.