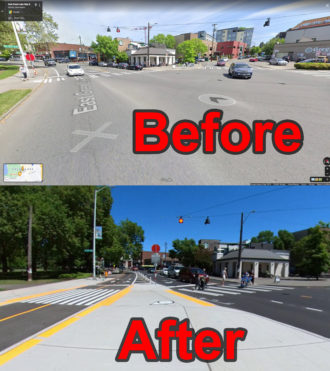 Crews are nearly finished upgrading one of the most important bike routes in Seattle. East Green Lake Way N may have a terribly confusing name, but it forms a hub of sorts for north end bike routes. The Interurban North regional bike route and routes from Greenwood, Northgate, Ravenna, the U District, Wallingford and Fremont all lead to Green Lake. It’s also among the few flat options in the area.

I filmed a bike tour of the new lanes that walks through many of the changes and the history behind them. Watch above.

Before the upgrade, the street had a skinny paint-only bike lane that disappeared in many places. Especially when the lake was busy, biking northbound could be a stressful experience as people would often drive across the bike lane to turn or park. And the worst was when people would swerve into the bike lane to pass a car waiting to make a left turn. The bike lane also completely or mostly disappeared at bigger intersections like Ravenna Boulevard, Green Lake Drive N and West Green Lake Way N.

So when SDOT went to repave the street, they also fully reimagined how the bike route works. Three vital intersections got major remakes, and the northbound bike lane has shifted to the west side of the street to create a two-way bikeway. Though one-way bike lanes on either side of the street are typically preferred, this is a good example of an exception to that rule. Because the lake side of the street has far fewer driveways, placing both bike lanes on that side dramatically reduces the conflict points for people biking northbound. 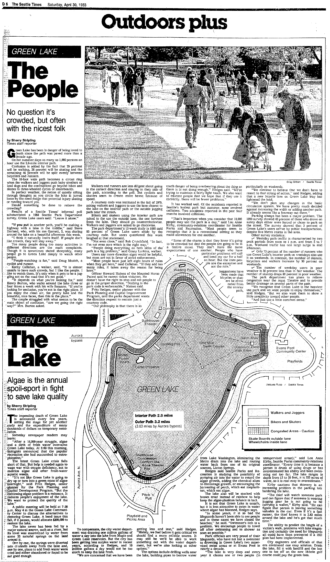 The old Green Lake bike lanes were initially created in response to overcrowding on the path around the lake. Seattle Parks even tried to ban bikes from the path entirely in the mid-1980s, but that effort drew strong opposition. At that time, about a third of path users were on bikes. Instead, the department landed on something of a compromise. People would still be able to bike on the path, but only in one direction. This is still the rule today.

But people biking for transportation bike in both directions, so the path’s rules essentially made it useless for bicycle transportation. Rather than try to pave a wide enough path through the park to allow for comfortable biking, neighbors pushed the city to add bike lanes (and on-street parking) to E Green Lake Way N, which used to have two general traffic lanes in each direction.

But the on-street lanes were never quite enough. Many people who would feel comfortable biking on the Green Lake path did not feel comfortable in the skinny bike lanes on the street. Now, a third of a century later, the city has given the street the kind of bike facility it needs.

As you can see in the video, there are many smart details in the design. It feels like one of those projects that makes so much sense, people soon won’t be able to remember it being any other way.