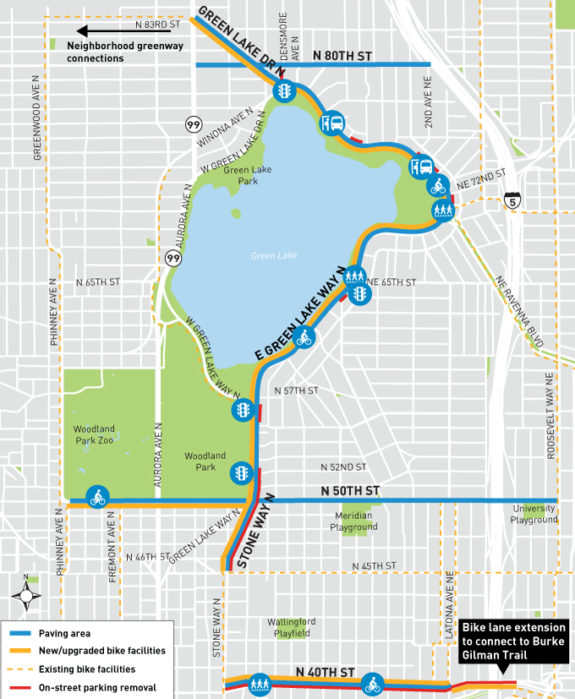 Overview map of projects in the paving group. Images from SDOT.

SDOT has grouped a bunch of Green Lake and Wallingford area paving projects together, designing and planning construction of them all at the same time. Because paving projects essentially wipe the street design clear, they are our best opportunities to build elements of the Bicycle Master Plan for little extra cost. The city can rehab existing infrastructure and improve safety using the same dollars.

Though the projects in this group were chosen for paving purposes, many of them happen to lie along routes designated for bike improvements. And the city’s plans are so far mostly very strong, including a two-way protected bike lane around Green Lake, uphill bike lanes on N/NE 40th St and improved bike lanes on N 50th St where it passes under Aurora.

You can learn more and weigh in on the projects through SDOT’s online open house. Responses are due Wednesday (tomorrow), so don’t procrastinate.

The repaving group covers a total of six miles. And though the city’s plans are a good start, a neighborhood group calling themselves Green Lake and Wallingford Safe Streets has organized to push for even more ambitious options.

The biggest changes of all are coming to Green Lake Way between N 83rd Street and N 45th St. The messy intersection at the north end of the lake will get a redesign and a new traffic signal, and the current paint-only bike lanes around the east half of the park will become a new two-way protected bike lane on the park side of the street. These are major upgrades to a major bike route.

The weirdest part of the whole plan is the transition from one-way bike lanes to the new two-way bike lane at N 52nd St. It would be cool if planners could find a way to do this transition at N 50th St instead, perhaps as part of a redesign of that awful intersection. The team currently does not plan any significant changes there, but they have heard loud and clear from basically everyone that they hate that intersection. It’s also worth noting that people walking have it the worst there, so a remake is very needed.

Here’s a look at the planned Green Lake Way changes starting at N 83rd St (a major bike connection across Aurora to Greenwood) and moving south: 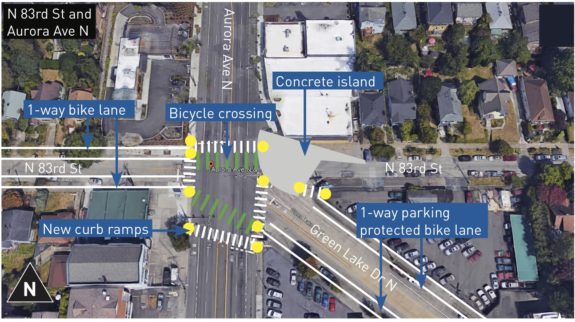 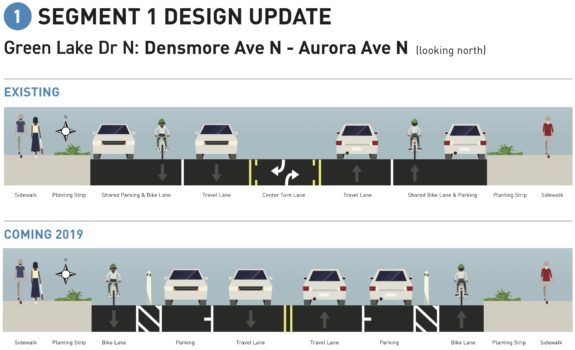 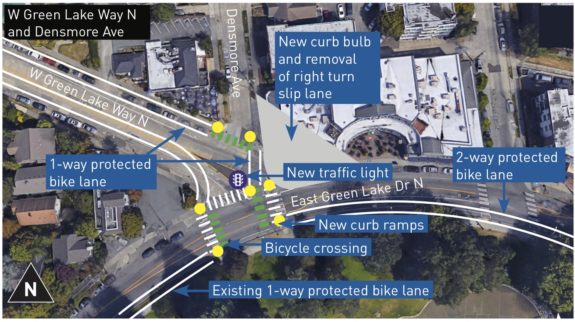 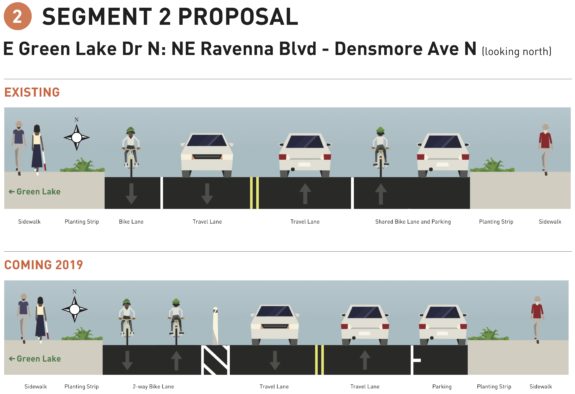 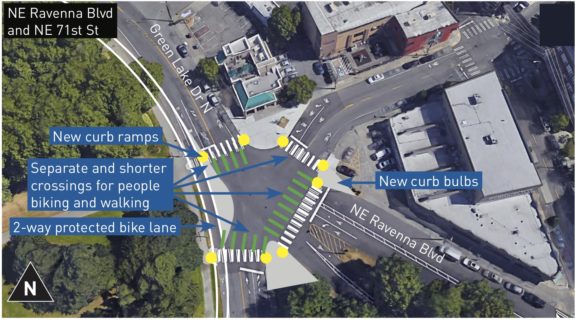 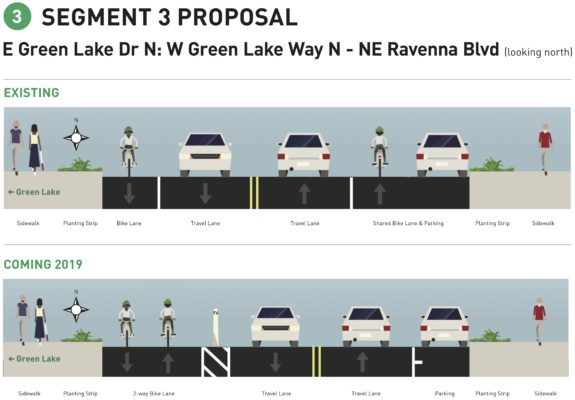 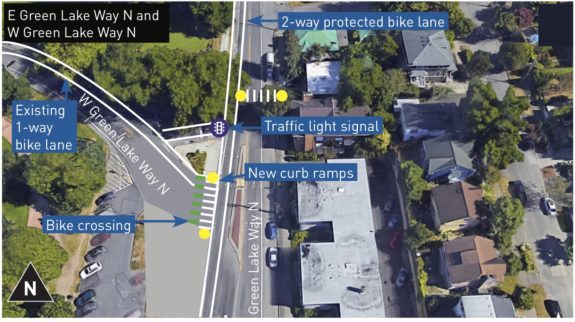 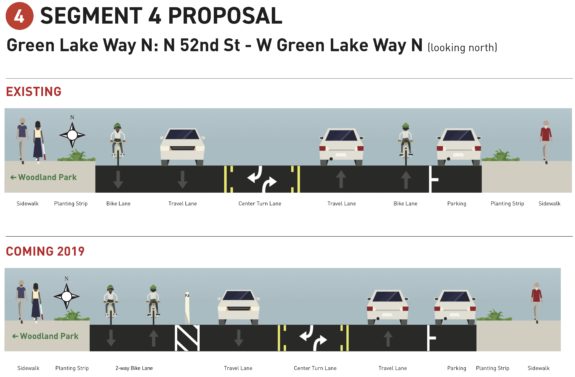 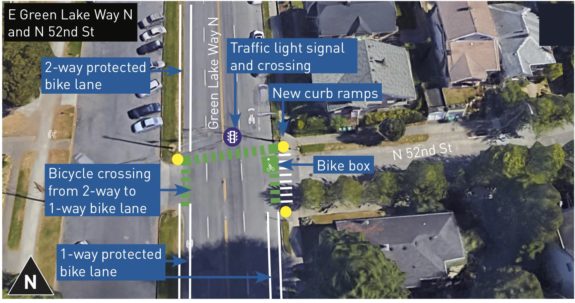 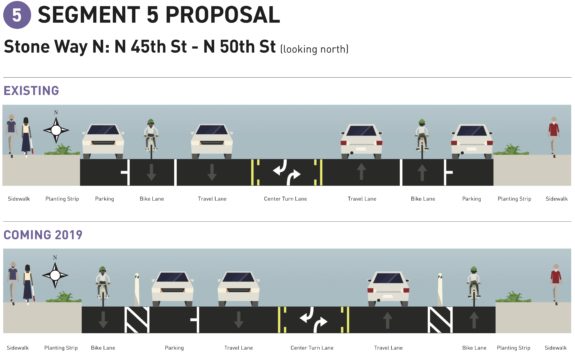 N 50th St is one of the few precious Aurora crossings for people biking. The city’s plan would slightly widen the existing paint-only bike lanes, but that’s pretty much it. 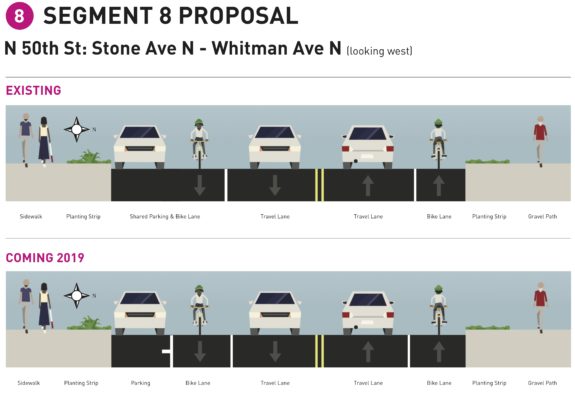 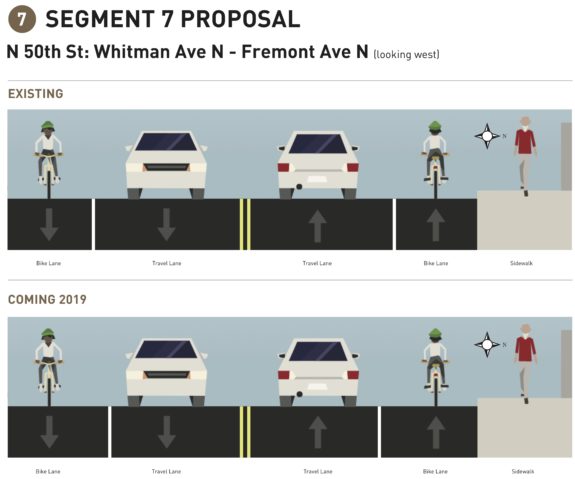 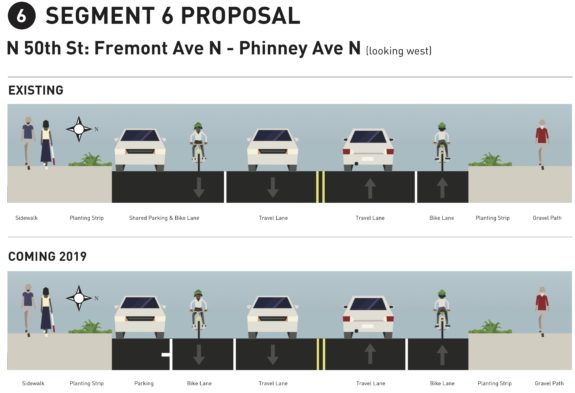 Really, N/NE 50th St should get a road diet for its whole length with bike lanes and a center turn lane added. Its outdated four-lane highway design has no place in a neighborhood. SDOT’s own experience with such safety projects has an amazing safety record, even if the skinny paint-only bike lanes they usually include are not the highest quality and do not achieve an all ages and abilities standard. There are no bus routes on 50th, so the decision to leave the road in its four-lane design is purely for the purpose of moving cars at the expense of safety.

But even if the city does not give 50th a safety redesign, the team should at least be looking at how to create a better I-5 crossing for people walking and biking. There are so few options for crossing I-5 that we can’t ignore any opportunity we have to improve them when we have the chance. (Full disclosure: I live nearby, so I have thought a lot about these I-5 crossings)

It seems like there is potential to remove an eastbound general purpose lane on the bridge by changing the right lane of 50th as it approaches 5th Ave NE into a right-turn-only lane for the many people headed to southbound I-5. That could possibly improve things for people driving (or at least not make much of an impact) while also freeing up a lane of space on the bridge.

One option would be to build a two-way bike lane on the south side of the bridge in the space vacated due to the new turn lane. Then new two-way bike lanes on west side of 5th Ave Ne and the east side of 7th Ave NE could connect people between 47th and 50th on both sides of the bridge. This would create an at least usable route for people trying to get between Wallingford and the U District without mixing with stressful traffic on 45th and 50th Streets.

If SDOT also constructed a two-way bike lane for one block on 5th Ave NE from 50th to 51st, that would connect people to a relatively flat neighborhood route connecting to Ravenna Blvd and NE 65th Street. It’s not a perfect or complete option, but it would be a huge step in the right direction. Here’s the basic idea: 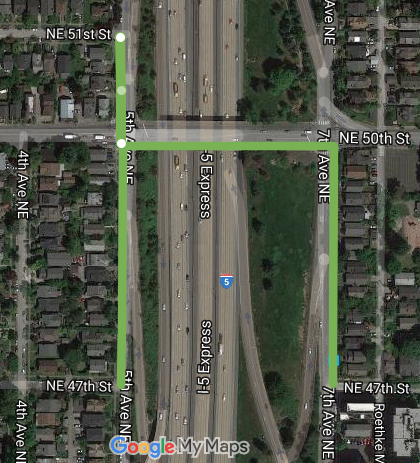 All the green lines would be two-way bike lanes in this concept by Seattle Bike Blog.

These improvements would also be poised to plug into elements of the U District Station Mobility Plan currently in design, which include a possible NE 45th Street I-5 crossing and bike routes to the under-construction light rail station on Brooklyn.

And this concept would save an enormous amount of money compared to the unfunded solution noted in the Bicycle Master Plan: A NE 47th St bike/walk bridge over I-5. While that would obviously be very cool, it would be much wiser to make the two existing bridges nearby safer rather than spend an enormous sum on a single crossing. Save that kind of investment for parts of the city that don’t have any other I-5 crossing options (like Beacon Hill or the far south and north ends of the city). The only way a NE 47th St crossing makes sense it as part of a larger vision like what Lid I-5 is proposing. Until then, people need ways to get between these two neighborhoods using the bridges we already have. 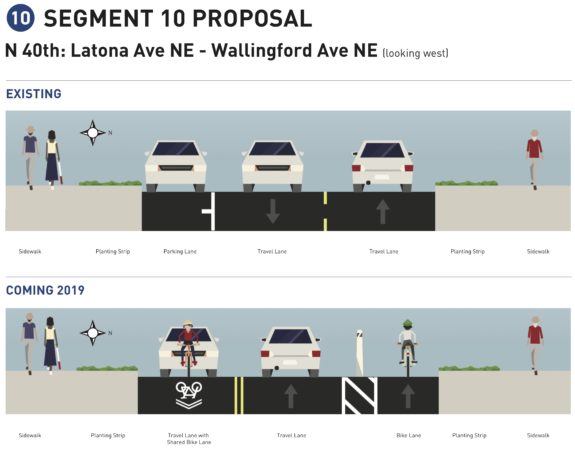 N/NE 40th St will get bike lanes in the uphill direction between 7th Ave NE and Stone Way. The Bicycle Master Plan calls for “in-street, minor separation” bike lanes here. The city’s plan more or less assumes you can find your own way downhill, but might need some extra space and time headed uphill. It’s not a perfect solution, but it will be a big help on those climbs.

The projects were all originally planned for construction in 2019, but now it sounds like some of them may be pushed back to 2020.