Lucas McQuinn, 29, pleaded not guilty to Vehicular Homicide Wednesday morning, three weeks after he allegedly drove under the influence and killed Andy Hulslander.

Andy, a father of two, was biking home to Lake Forest Park from his job in Wallingford when McQuinn allegedly plowed into him from behind at a red light in the Ravenna neighborhood. Andy died very shortly after the impact. 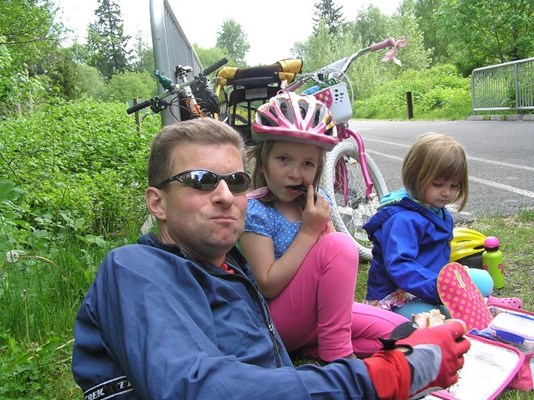 Andy and his daughters take a break during a family bike ride. Photo from his online obituary.

Andy was born in Birmingham, Alabama, and lived in Lindenhurst, New York, and Reading, Pennsylvania, before moving to Seattle.

“Andy moved to Seattle in 1993, participating in top-level track cycling racing there while working his way up to managing stores for Bicycles West,” according to his obituary. “Andy was a very successful Cat II cyclist with Team Wheelsport on both road and track.

“He first met Dana Tiedemann, of Penfield NY, and later proposed to her, at Marymoor Velodrome in Redmond, WA.”

His two daughters are six and nine years old, and it’s clear from his obituary and the heartbreaking photo gallery posted there that he was a dedicated father.

For anyone looking for a way to contribute in his memory:

In lieu of flowers, contributions in memory of Andy may be made to the raptor program at the Woodland Park Zoo, www.zoo.org/mobile-donation or the Forgotten Children’s Fund for which he built bikes, www.forgottenchildrensfund.org

Andy’s body was found 30 yards from where he had been waiting for the light to turn green.

It was dark at 11 p.m. when he got to the traffic signal eastbound on NE 65th Street at 15th Ave NE, but he had a blinking red light on the back of his bike and was even wearing a “brightly-colored cycling jersey,” according to investigators. That’s far more than the red rear reflector required by law.

But it doesn’t matter how much safety equipment you have when someone driving far too fast and “really, really drunk” — as one witness put it — plows into the back of you. Witnesses estimated that McQuinn was driving somewhere between 40 and 50 mph, though investigators were still working to reconstruct the collision and determine the exact speed at the time charges were filed. The speed limit is 30 mph.

A Seattle Police officer conducted field sobriety tests on McQuinn and determined he was intoxicated. He refused to take a breathalyzer, though blood was drawn a few hours later at the station (test results were still pending at the time of the charges).

“The proximate cause of this collision appeared to be McQuinn’s inability to avoid a collision with a conspicuous bicyclist, moving in the same direction and occupying the same lane of travel,” according to the charging document. “McQuinn’s inability to safely operate a motor vehicle was likely a combination of alcohol impairment and excessive speed.”

He pleaded not guilty to Vehicular Homicide and is currently free on $100,000 bond. He has waived his right to a speedy trial (which is common for such a serious charge). The court date to set the schedule for his trail is August 13. As a condition of his release, he cannot drink or possess alcohol, go to an establishment that primarily sells alcohol or drive a vehicle without an ignition interlock. He also must wear a transdermal alcohol monitoring device.

Plans to improve safety on NE 65th Street have been controversial in recent years. Stay tuned for more in a follow-up story tomorrow.