I already wrote about the MLK Jr Way S bike lane concepts, but SDOT gave a few more details about the project during the May Bicycle Advisory Board meeting (PDF) that are worth sharing.

First, some background. SDOT is conducting some early planning for bike lanes on MLK between S Judkins St and Rainier Ave S, so essentially from Mount Baker Station to the I-90 Trail. The project team is going to develop the 30% design in the summer and fall, but the project isn’t scheduled for construction until 2023.

They presented three options, with option three being by far the most popular based on comments to my original story and SDOT’s presentation. 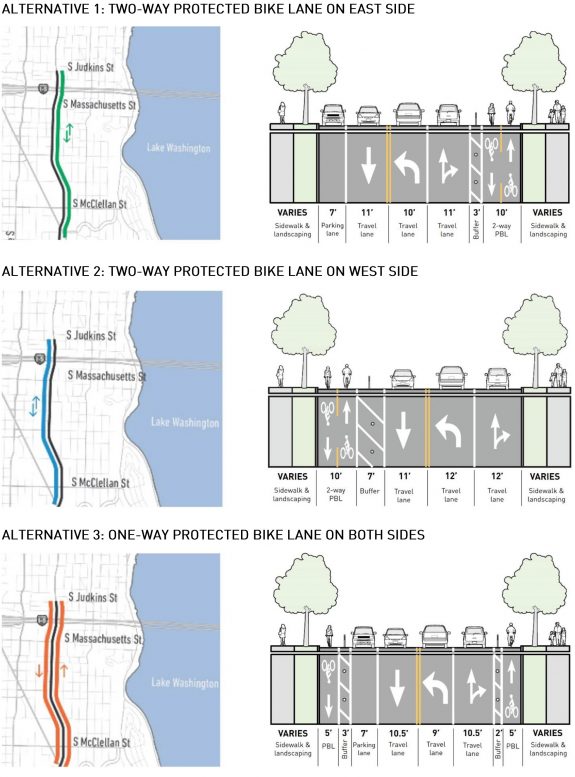 Not only is option three the “community preference to date,” according to SDOT’s presentation, but it is also the most affordable. As I wrote in my original story: 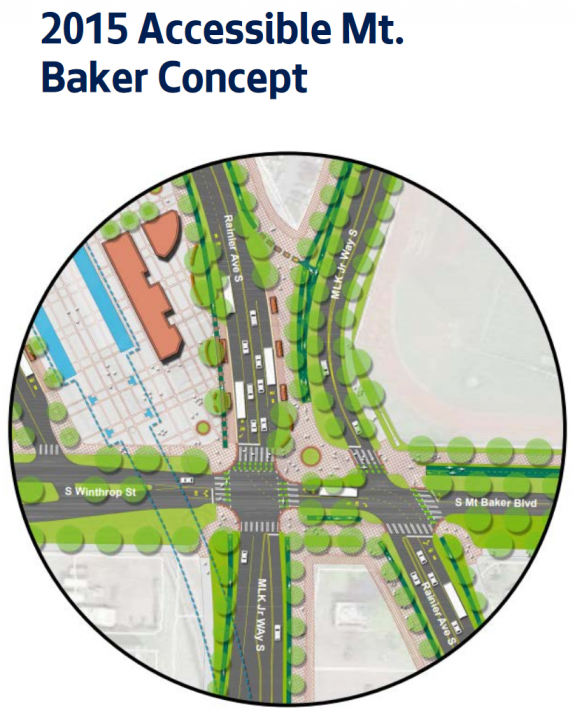 But the one-way bike lanes in option three should also have quality access to either side of the street so long as the project creates a complete street with safe crosswalks at every intersection. And that should be the goal, though perhaps it needs to be more explicitly stated in the project description. Installing bike lanes should make installing safe crosswalks much easier, anyway. And with safe crossings and bike lane protection through intersections, any benefits of the two-way options pretty much evaporate.

This is part of why I decided to write this follow-up. I wanted to share this info, but I also wanted to talk about how to decide between one-way and two-way bike lanes when developing any street design plan.

One-way bike lanes are typically the best practice, but that doesn’t mean two-way bike lanes are bad. Nothing is that simple. There are many situations where they are a great solution or maybe even a necessary compromise. To name a few examples, two-way bike lanes are often a good option when making a connection between, say, two trails with access points on the same side of the street like Gilman Ave W. Or if one side of the street is next to a large park or waterway and therefore has far fewer intersections than the other side like Green Lake Way or the Seattle waterfront trail. Two-way lanes can also be useful on dense one-way streets like 2nd Ave downtown, where there is strong demand for bike trips in both directions and very limited space to work with.

It is often true that beyond a certain amount of bike traffic, the effectiveness of two-way bike lanes breaks down. This is why cities with huge bike-riding mode share typically avoid two-way bike lanes. But to be honest, that will be a great problem to solve some day in the future. We have a long way to go before we get there. And there’s no reason why future SDOT couldn’t turn the two-way lanes we build today into one-way lanes and build another bike lane on the other side of the street. And that will be easier to do when there are so many people biking that they don’t fit anymore. But those are decisions for another day.

This is why I don’t find the need for future-proofing to be a convincing reason to resist two-way bike lanes in today’s Seattle. Right now, we need to use whatever tools we have to make basic connections so more people can get where they need to go and ridership can keep growing.

To put this all another way, one-way bike lanes should be the default option unless some special circumstances suggest a two-way would be better. This stretch of MLK Way S doesn’t seem to have a convincing reason to go with two-way bike lanes.