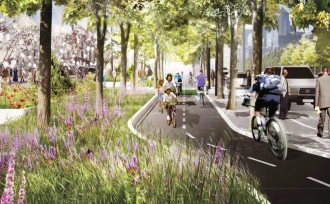 Plans include a two-way bikeway on the waterfront side of the street, separated from both vehicle traffic and the walking promenade.

If you are biking from the Alaskan Way Trail to the Elliott Bay Trail, the connection will likely be seamless, easy and safe. The Waterfront Seattle crew heard requests for this style of bikeway loud and clear, and they have delivered.

The new Alaskan Way, located mostly within the current footprint of the viaduct, will be four or five lanes for most of its length until it reaches Columbia Street. South of Columbia, it completely explodes with travel lanes and starts to look a whole lot more like a freeway than a waterfront boulevard. Near the Ferry Terminal, there are even sections with eight travel lanes and a parking lane (though some are transit-only).

Imagine having to cross this on foot or bike. (The “F” lanes are for cars turning into the ferry terminal)

As we argued in a previous post, we cannot allow Alaskan Way to become another highway. It must be a place for people first, traffic corridor second. Even the four- and five-lane sections will likely be unfriendly to anyone outside a car. The intersection at Yesler is the stuff of nightmares: 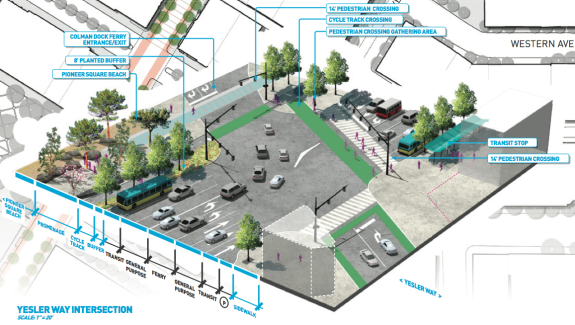 I know there are concerns about moving traffic through the new waterfront since so few people (especially freight carriers) will be able to find any use for the deep bore tunnel. But this is hardly what I would imagine a multi-billion-dollar waterfront remake would look like. You can draw all the pretty concept trees you want, but that doesn’t mean that, on the ground, people are going to feel invited to cross an absurd eight lanes of traffic.

Again, this is not a highway. It is a waterfront boulevard. If planners need to remove general purpose through lanes in order to make the road more comfortable to cross, then that’s exactly what the design team should do. Imagine the image above with two fewer lanes and that saved space utilized to create a median or expanded sidewalk. It would still be a ton of lanes, but much more manageable. Would this make traffic worse? It’s unknown, but maybe. But it’s worth it to create a successful and inviting waterfront for everyone.

Here’s the presentation documents if you want to take a closer look. You can also find more documents on the SDOT blog.

This entry was posted in news and tagged alaskan way, downtown, waterfront. Bookmark the permalink.